Obra, Poland, July 1-13, 2019: A two-week long meeting, “the Interchapter meeting,” brought together some 60 Oblates from all the Provinces and Delegations of the Congregation, and the two Missions of the Region of Europe.

This meeting occurs every six years, mid-way between two General Chapters, and has three main goals, well described in Rule 128e in its last section concerning the General Chapter: “Between Chapters, the Superior General in Council in plenary session will call at least one meeting of the Provincials with the Central Government. After consulting the Provincials, he will determine details of the convocation and the agenda of the meeting. The principal purpose of such a meeting is to evaluate the extent to which decisions taken in Chapter have been carried out, to encourage further implementation of such decisions, and to provide for the remote preparation of the next Chapter.“

The details (such as the place and the date) and the agenda of the Interchapter meeting were prepared in advance by the Superior General with the help of an internal committee of the Central Government. The agenda for the three weeks was drawn up in light of the three goals of the meeting. 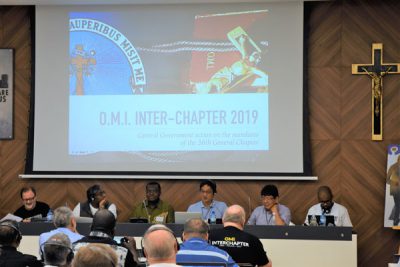 During the first week, our work was focused on evaluating the extent to which decisions taken in the last Chapter have been carried out.  This was done through different reports from the five Regions of the Congregation and from the Central Government. It was a good opportunity to become aware of what is being achieved throughout the Oblate world in order to respond to the six calls of our last General Chapter.

The various reports were heard in light of three guiding questions that also motivated discussions in the group meetings that followed:

Each of these questions helped us walk the Emmaus journey, the Biblical theme that inspired the entire Interchapter.

The last day of the first week was dedicated to studying and deepening our understanding about the issue of the safeguarding of minors and vulnerable adults. Ms. Suzanne Phelan, a resource person for our brother Oblates of the Anglo-Irish Province, helped us address this very sensitive and crucial issue. Her intervention raised the awareness of all the participants about the importance of this issue at this point in the Church’s history, and our responsibility to ensure that all our ministry sites and communities are safe environments for minors and vulnerable adults, as oriented by the Church, especially in light of the two latest motu proprios of Pope Francis. It is essential that we be well-prepared with processes in place and resources to help us address these situations.  We are responsible to accompany pastorally and to support those who have been abused, as well as provide pastoral care and management for those who have committed abuse. 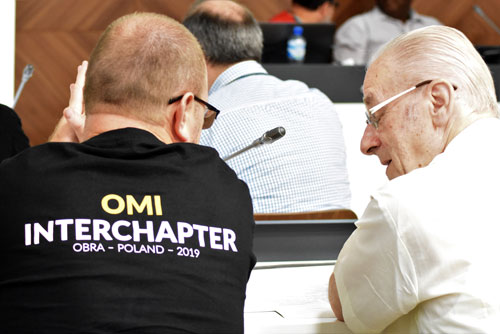 During the second week, we looked closely at what still needs to be done concerning the six calls from the 2016 General Chapter. This was an opportunity for sharing commitments, “dreams”, and projects, all aimed at giving a better quality to our mission in the Church, wherever we live and work. We began with two days of recollection that introduced us into this time of sharing. A young Oblate from the Czech Republic offered us an intense experience and a good opportunity to deepen our spiritual life through his challenging meditations.  The days provided time for prayer and the sacrament of reconciliation, and a walk with a brother Oblate modeled on the experience of the two disciples of Emmaus. These days helped this special community of the Interchapter focus on Oblate values and identity.

After the retreat days, we worked on identifying, especially in Regions, how to respond more fully to the calls of the 2016 Chapter. Each Unit and each Region came up with several commitments and areas of work for the coming three years and beyond. Many issues were shared at this point, according to the situations and the priorities set by the different Regions: youth and vocation ministry, formation, restructuring of Units, interculturality, consolidation of formation houses, leadership, formation of formators, etc. More issues were raised and highlighted in the open forum that took place in the plenary. An issue that was raised and left to the Central Government for further reflection and study was the possibility of a new way to organize initial formation in the Congregation: Should the Superior General take greater initiative to distribute more evenly around the globe our post-novices in formation houses, with intercultural formation teams?   This could help promote interculturality as well as a style of formation oriented for consecrated life and for mission.  No decision was made, as there was not sufficient time to deepen the issue or to study its implications and consequences.  But, the conversation took place with some passion and t was left in the hands of the Superior General and his Council for further consideration.

The steering committee, which helped the meeting from its beginning, identified four major areas where Units and Regions are called to work in the coming years, four “Regional Priorities” as they have been called.  These are Restructuring, Formation, Safeguarding of Minors and Vulnerable Adults, and Interculturality. While these are not the only areas to be worked on, it became evident throughout the meeting that these are areas for further reflection and action, in line with the whole “message” of our last General Chapter.

The third objective of the Interchapter meeting was “to provide for the remote preparation of the next Chapter”. Most of the last two days of the meeting were spent looking toward the General Chapter of 2022. We were led through several topics, such as the General Chapter in our Constitutions and Rules, the site chosen for the next Chapter, some new elements in the 37th General 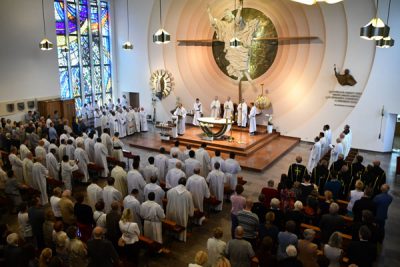 Chapter. The final important point of this process was to help the Superior General discern a theme to be proposed to the members of the 37th General Chapter. The Interchapter members gave their attention to this issue and worked for three sessions, including work in small groups and a plenary session, around the topics that received the greatest consensus during the ad hoc session. The result of the sharing and discussion was finally left in the hands of the Superior General who will continue the discernment in dialogue with his Council.

The last day was also a good opportunity for considering some issues that were not directly related to the Interchapter: the International De Mazenod Center in Aix-en-Provence, the 2021 global (via internet) gathering for all those connected to the Oblate charism, the extraordinary Mission Month of October 2019, and the proposal to celebrate an Oblate Marian Year in 2022.

The Interchapter meeting ended with an open dialogue between the five Oblate Regions and the Central Government. The sharing was about expectations from both sides and areas of collaboration in the three coming years. Then, a word from the Superior General closed the meeting. A solemn closing celebration of the Eucharist followed, with two symbolic gestures: the washing of feet and mission-sending.  A large group of lay friends and associates from the area around Obra participated in this moving celebration.

The Interchapter was an excellent opportunity for family sharing, in many different ways. A good number of “side meetings” offered participants an opportunity to discuss issues of common interest.  There were three evenings organized around themes that are relevant for our life and mission: Oblate mission and social media, and Oblate mission with youth. One evening we had the opportunity to listening to the experience of a young man and a young woman from the Niniwa group, a very creative approach to mission with youth, developed in the Province of Poland.

Last but not least, our prayer life during the Interchapter was a precious opportunity to celebrate our faith and our Oblate identity. Each session began with Morning Prayer together and, in the afternoon, we were able to pray with Oblates in formation and Lay Associates around the globe through pre-recorded prayer on videos. Our celebration of the Eucharist varied each day, at times by Regions, other times by language groups, and every other day, all together.  Each evening we gathered in front of the Blessed Sacrament in silent oraison, the privileged “place” where Eugene found so much delight in meeting all his Oblates, especially those committed to far-away missions. This spirit was present among us and made us grow as a family, the most united family on earth!