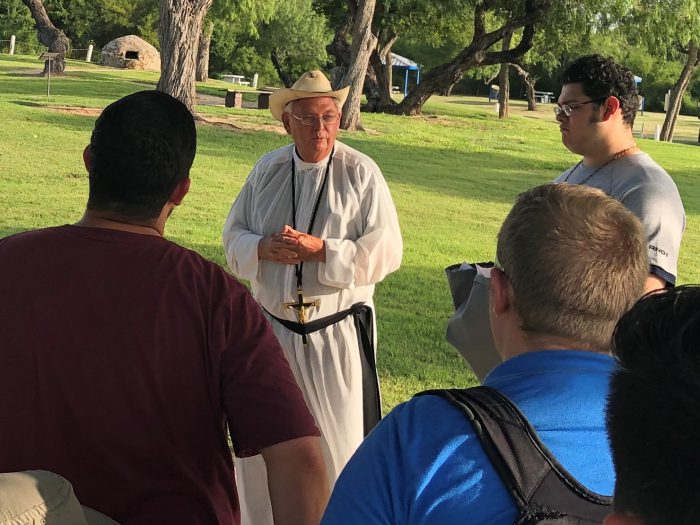 Fr. Roy Snipes, OMI outside the chapel talking to some young men interested in an Oblate vocation.

For most of his 30 years in ministry as an Oblate priest, Fr. Roy Snipes has been known as the priest who brings his dogs along with him to Mass. But recently, he has found himself in the unwanted spotlight of an effort to stop the building of a wall designed to end the flow of undocumented immigrants into the U.S. from Mexico.

Fr. Snipes is Pastor of Our Lady of Guadalupe Parish in Mission, Texas, a small border town on the banks of the Rio Grande. In addition, he also oversees the historic, La Lomita Chapel, founded and built by the Oblates in about 1865 as a stop-over for itinerant Oblate preachers who traversed the Rio Grande Valley ministering to people living and working on remote ranches and farms. The Chapel is now on the National Register of Historic Places and is part of a municipal park owned by the City of Mission. Fr. Snipes continues to celebrate Mass there and minister to visitors.

Literally on the banks for the Rio Grande, La Lomita is separated from the City of Mission by a levee designed to hold back the river when it floods. As planned, the new wall would run along the levee, leaving the Chapel and many homes in a sort of “no man’s land” between the water and the wall. The local populace, Catholic diocese, government officials, Fr. Snipes and the Missionary Oblates have all registered their opposition to the wall, and in the national media, the Chapel has become a symbol for the political debate between those who support a border wall and those who don’t.

Fr. Snipes has been interviewed and profiled in national TV and radio, and in magazines and newspapers in his position as the local pastor. His folksy ways and straight-talk have made quite an impression on the cynical media. Though he did not seek this attention, given what’s at stake, he speaks his mind.

In this ten and a half minute film, which is part of the PBS Online Film Festival, film-maker Carlos Estrada profiles Fr. Snipes, who reflects on the La Lomita Chapel.