By Mark Abeln, Originally Published by Rome of the West

THE FIRST AERIAL MASS was offered on Sunday, May 6, 1936, aboard the giant Zeppelin airship LZ 129 Hindenburg, by the noted missionary priest, Fr. Paul Schulte, of the Missionary Oblates of Mary Immaculate. 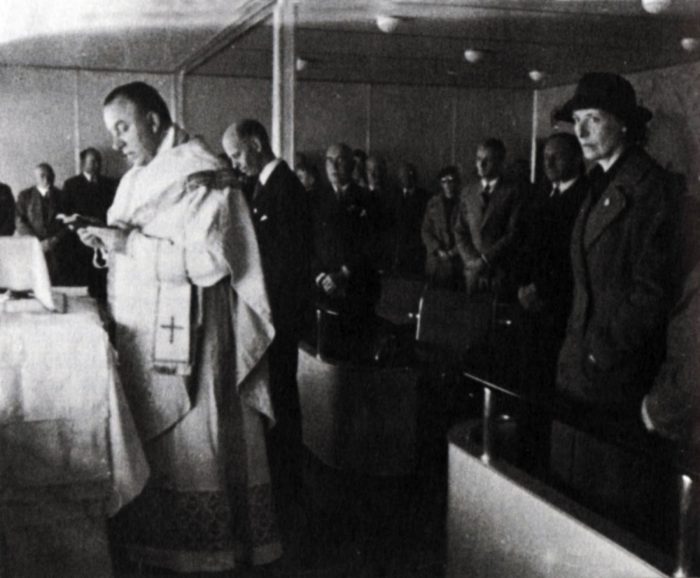 [Source: airship.net] On the right is aviatrix and air travel promoter Clara Adams. A passenger, United Press reporter Webb Miller (seen just to the right of Fr. Schulte, above), wrote:

“Father Paul Schulte, of Aix-la-Chapelle, known as the “flying padre,” celebrated the first mass in the air, for which the Pope had granted special permission. Schulte erected an altar in the salon, where all the passengers gathered. The candles were not lighted because of danger of explosion.”

Fr. Schulte’s Mass intention was for the repose of the soul of his brother, Lieutenant Franz Schulte, who died in 1919 of influenza while a prisoner of war in England.

The Hindenberg was so large, indeed was the largest volume airship ever made, that it was able to transport about 100 passengers and crew over long distances in comfort, being immune from turbulence and affording dramatic views from its large windows and low-altitude flight. Airships were large enough to allow for the celebration of Holy Mass, unlike the far smaller and much more cramped aircraft of today. As I once was a frequent air traveler (a form of transportation that I grew to despise), I know that even traveling First Class on one of the largest, fastest, most spacious, and efficient passenger aircraft ever made, the Boeing 747, is an experience that can usually be classified somewhere between an uncomfortable drudgery and a terror, especially on trans-Pacific flights. With the almost tyrannical security precautions now found at U.S. airports, you would find it difficult to get me to even step on an aircraft, even if you paid me highly — it is almost faster driving myself to places like Chicago from Saint Louis, and certainly is far more comfortable and pleasant.

Time, they say, is money, so transportation has to be as fast as possible. Efficiency is of utmost importance, and so people have to be inhumanly crammed together with little room to stretch or walk about, and the fastest commercial aircraft ever built, the now-decomissioned Concorde, was very uncomfortable. Modernism is always in tension, being at war with itself: speed is inefficient. Modernism and its current descendants attempt to overthrow the older Christian philosophy, which cares less about “wasting” time, and instead values good pleasure and good company in all things, even travel. Older, more pleasant forms of transportation are not as fast as modern ones, and care little about efficiency, but ironically are actually more fuel efficient than modern forms, even while they are more roomy and comfortable. We see this in the airships of a bygone age. The Hindenburg had an efficiency that I estimate to have been greater than 100 passenger-miles per gallon of Diesel fuel. That beats even the most modern of passenger aircraft, and it did so in much greater comfort.

Zeppelins were doomed by politics. The United States, practically the sole provider of lighter-than-air helium gas at that time, refused an export license for that noble gas, forcing the Zeppelin company to use explosive hydrogen gas as an alternative. The director of the Zeppelin Company, Dr. Hugo Eckener, was a German national hero and was a fierce anti-Nazi, and his naming of his airship the Hindenburg after a moderate politician outraged that regime. Instead, the Nazis seized control of the company, sidelining Eckener and making him persona non grata, and used the airship for propaganda. During Nazi control, the new management did not pay much attention to safety, which was a primary goal of Eckener. The fate of the Zeppelins was sealed when the Hindenburg burst into flames while landing at Lakehurst, New Jersey in 1937, leading to great public distrust of the technology.

Click here for a video of Fr. Schulte, filmed at Lakehurst after he stepped off of the Hindenburg, after the same trip where he offered Holy Mass seen above. Here is his short speech:

“This is my second visit to the United States. Some six years ago I was here for the first time and you can well imagine how pleased I am, to be back, and to be able to meet my old American friends. There are so many of them, all over this country, that I should have a plane right now. I’d take the controls myself and would go joyriding from one place to the other, so I would get to know every nook and corner of this wonderful country. I don’t like this country, I love it.” 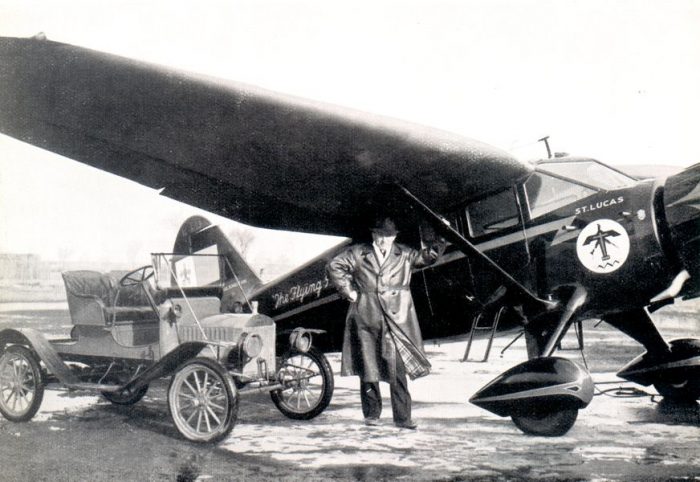 Fr. Schulte was indeed a pilot. Drafted into the Prussian army during World War I, he sustained injury and joined the Air Force, where he was trained to be pilot. Ordained a priest in 1922, he was sent to South Africa on behalf of the Missionary Oblates. In 1925, a childhood friend, fellow soldier and priest, Fr. Otto Fuhrmann, died of pneumonia complicated by malaria in South-West Africa because the nearest hospital was five days’ travel away. Schulte was stunned by the news and wrote “We have cars and planes, but my good friend must die because he has no vehicle. Weren’t planes and cars also invented to spread God’s kingdom?” To reduce such tragedies in the future, in 1927 Fr. Schulte founded the Missionalium Vehiculorum Associatio, or MIVA, to provide modern forms of transportation to the missions in remote parts of the world, using the motto “Obviam Christo terra marique et in area” (“Toward Christ by land and sea and in the air”). Later, Fr. Schulte was assigned to a parish in northern Canada, and in 1938 piloted a daring 2,200 mile aerial rescue mission to the northernmost Catholic mission in the world, in Arctic Bay. 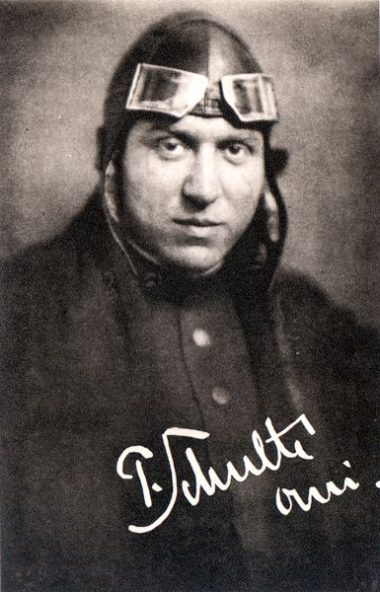 For more information and commentary, see Mass on a Zepplin and More by Matthew Alderman, at the New Liturgical Movement, which includes a link to an article on Catholic chapels aboard passenger ships, by Andrew Cusack, which is a small peek into the then-elegant world of trans-Atlantic travel.

I am pleased the Zeppelin Company is back in business, and is making Zeppelins again, albeit in a much smaller size. I took the photograph (below right) of one of the new small airships, at the Saint Louis Downtown Airport, located across the Mississippi River in Cahokia, Illinois, in August of 2011:

New, larger, and safer helium Zeppelins would be ideal for shorter-distance air flights, such as the well-traveled Saint Louis to Chicago route, as well as up and down the eastern seaboard of the United States. This particular Zeppelin traveled between Los Angeles and San Francisco, California, over the spectacular southern California coastline. Many such airships, in larger size, could eliminate much of the waste of land used by conventional runways, and bring back a more civilized, more respectable, more comfortable, form of travel, where even daily Mass could be offered.

Less than three miles from this airport is the National Shrine of Our Lady of the Snows, in Belleville, Illinois. Devotion to the Blessed Virgin Mary under that title was brought to the United States by Fr. Schulte during World War II. Because he was a German citizen, the U.S. government interred him at Saint Henry’s Seminary, in Belleville, Illinois, and kept under FBI surveillance. Based on his Arctic experience, Fr. Schulte, in about 1941, constructed a small chapel there in honor of Our Lady, and commissioned artist J. Watson Davis to make a painting of her, depicted at an Inuit mission, surrounded by the Aurora Borealis.

Devotion to Our Lady swelled so much that the campus of Saint Henry’s was too small to contain the crowds, leading, in 1958, to the construction of the new Shrine at its current site.

The Shine is notable for its extensive use of Modernism in church architecture, some of the best examples I’ve seen, in any form, sacred or secular: 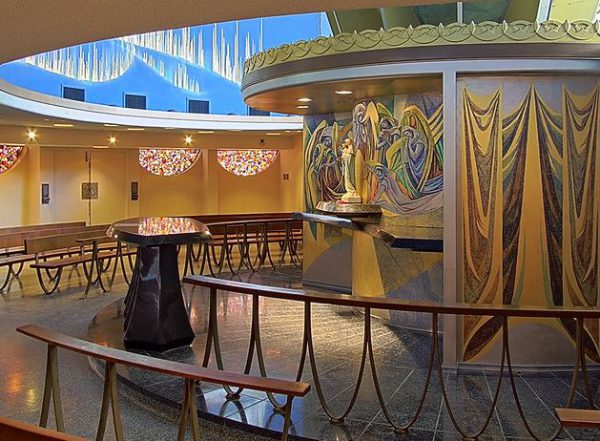 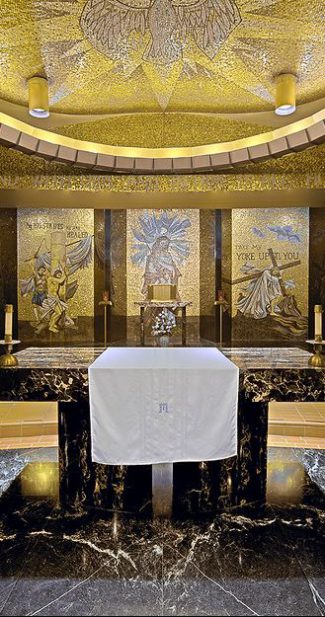 The architecture here in the chapels, built in 1960, is quite striking and undoubtably Catholic, and not iconoclastic as is typically the case with that style. But I am not so certain how successful it is: certainly my readers have strong opinions of it, typically towards the negative. As Catholics, we, like Fr. Schulte, must determine what technological wonders of our current age are worthy and for what purpose.