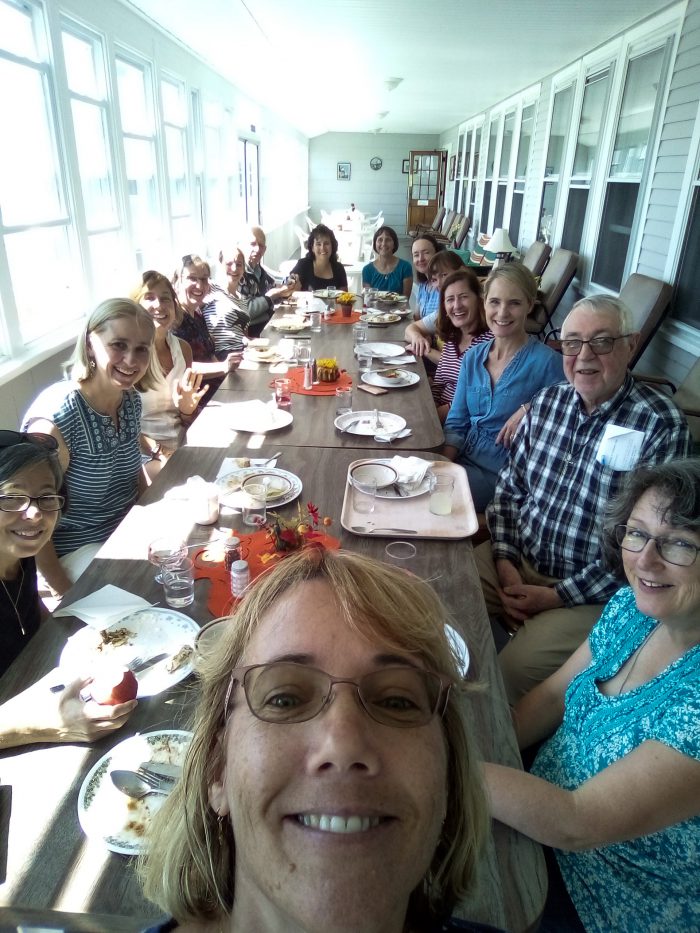 A “selfie-style” group photo features Fr. Demers on the left in the rear and Fr. Winter on the right among the home-schoolers. ((Photo courtesy of Fr. Harry Winter, assisted by John Ivas)

On the weekend of Sept. 13-15, Father Frank Demers gave his ninth annual retreat to home school mothers.  For the second year, Father Harry Winter helped him.

Thirteen mothers arrived at the Marie Joseph Spiritual Center, Biddeford, Maine, by supper time on Friday. They spent the evening socializing, helping Frank celebrate his 91st birthday, and then praying the rosary, singing the first decade of the Sorrowful Mysteries, and reciting the rest.

There were twenty minute slots for confession, beginning Friday evening.  By closing time on Sunday noon, Frank had heard all their confessions, and spent more time with spiritual direction for some of them.  After Lauds and Mass on Saturday morning, he gave the first conference, “The Journey of Holiness,” from 11-11:45 am.  Harry remarked that it was the best conference he had ever heard.  Frank used St. John of the Cross, the Doctor of Spirituality, to present the three stages of holiness.  First, prayer.  Then detachment, used in the special way of John of the Cross:  one still uses earthly possessions, but not as one’s own. And thirdly, most importantly, the realization that  when the road block occurs regarding these first two steps, one must resort to acts of love and kindness, not increased prayer, not  increased reading of many books and not increased detachment.

When he informed the woman that by loving their children and their spouse, they were already saints, he realized their disbelief about this.  He warned them that despite the danger from pride, they must be aware of their sanctity.  He concluded that if he were pope, he would canonize every mother.  They laughingly responded that they were taking up a collection to send him to Rome to be pope.

Saturday afternoon was free for personal time, which most of the women took advantage of by socializing as support groups.  After Vespers, Harry gave the second conference “The Holiness of the Family,” remarking that Frank had set the bar very high for this conference.  Harry looked at the Feast of the Holy Family and its importance on the Sunday between Christmas and New Year, and underlined that Jesus did not tell Lazarus, Mary and Martha to sell everything and follow Him.  When he stressed the importance of the Myers-Briggs Temperament Inventory and its four tensions, several women explained how it had helped them. He concluded with the growing place for the family and laity in the Church, recommending the women to read that page on the website Mission-Unity-Dialogue, especially the Vatican 2004 document “Sensus Fidei in the Life of the Church,” and Pope Francis’ quote on the laity having a nose for evangelization.

The women organized a Holy Hour from 8-9 pm on Saturday.

The retreat concluded with Lauds and Mass on Sunday, time socializing, and lunch at noon. The Sisters of the Presentation of Mary, who run the center, led the inspiring Lauds and Evening Prayer (some beautiful singing) and furnished excellent meals.  These sisters mentioned that Lon Konold, O.M.I., Bill Sheehan, O.M.I., and Dick Sudlik, O.M.I. have all given very valued retreats at the center.  And Frank told  Harry that Dick McAlear, O.M.I. (see www.frmac.org) had been first approached nine years ago by the women.  When he could not fit it into his schedule, Frank began his run.