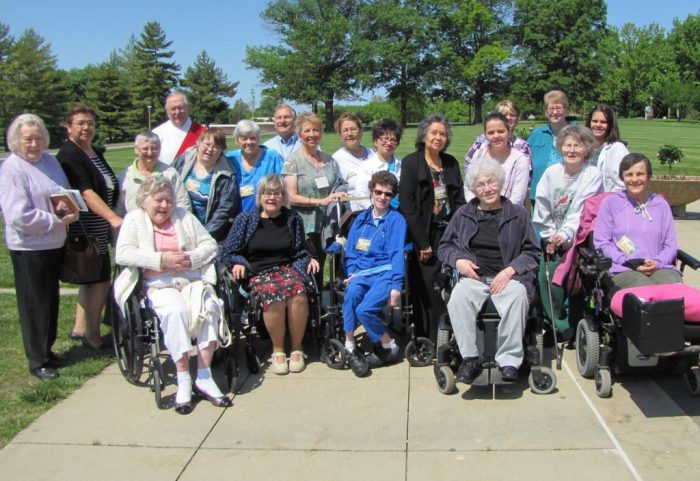 A group photo of some members from a previous gathering.

The National Shrine of Our Lady of the Snows in Belleville, Illinois will be the location for the annual weekend Fall Retreat sponsored by the Victorious Missionaries. The event will be held October 18-20, 2019 at the Shrine’s Visitors Center. It begins with dinner at 6:00 p.m. on Friday and ends after lunch on Sunday.

The title of this year’s retreat is “Still Keeping the Faith” which will be presented by Fr. James Allen, OMI. Fr. Allen recently celebrated his 60th year as a Missionary Oblate of Mary Immaculate. Fr. Allen has served as an educator, parish pastor, Director of the Shrine of Our Lady of the Snows, and preacher of parish missions. In addition he spent several years assigned to the Oblate General House in Rome, Italy. Currently living in Belleville, he often celebrates Sunday Mass in Spanish in various places.

The Victorious Missionaries are people dedicated to providing spiritual support for all those with disabilities or who are chronically ill and those who wish to journey with them. They are a diverse group – comprised of laity and religious, women and men, the young and the not so young. They are a visionary people called to live a life of hope; called to see past the struggles of life to the victory that is born through the spirit of love. The VM organization was founded by the late Fr. John Maronic, OMI, in 1964. It was the first movement that was formed by and run by persons with disabilities. Today, the VMs have six chapters throughout the United States.