By Jim Savarese, Oblate Associate, with Thanks to Fr. Eugene Tremblay, OMI 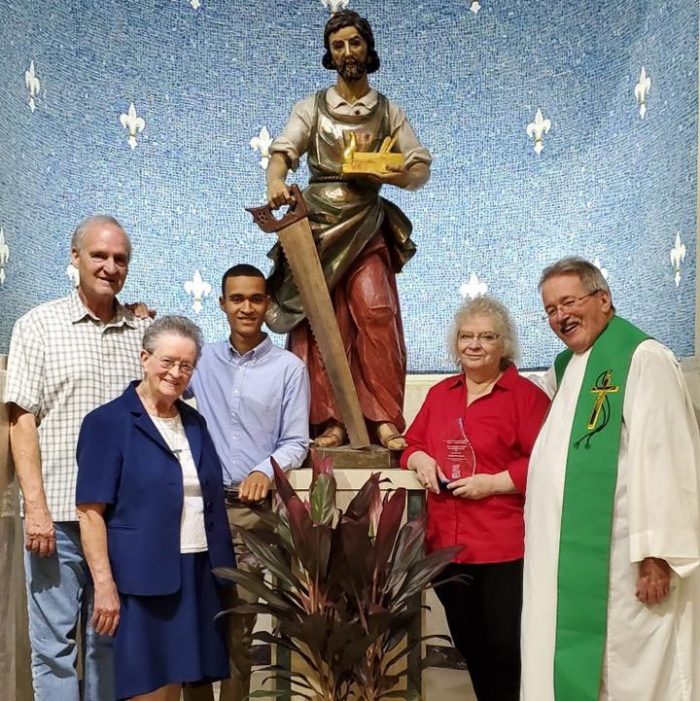 The Christian Worker Recognition Award was launched in 2016 during St. Joseph the Worker Shrine’s 60th anniversary year of its dedication as an inner city spiritual oasis (the established Oblate foundation here dates back to 1868). Recipients are individuals in the greater-Lowell area who embody the values of St. Joseph: the Christian values of faith, humility and outreach to the marginalized in their personal lives as well as integrity, respect and service in the workplace.

Nominations for the award are received through a congregation-wide nominating process, and from that list a Selection Committee chooses the final honorees. Recipients of the award come from all walks of life: past honorees include a businessman, a nurse, a Corrections official, an electrical contractor, and an accountant. This year the Christian Worker Recognition Award is being given to a factory line worker and a husband and wife, professionals who are both involved in aspects of Geriatric care. 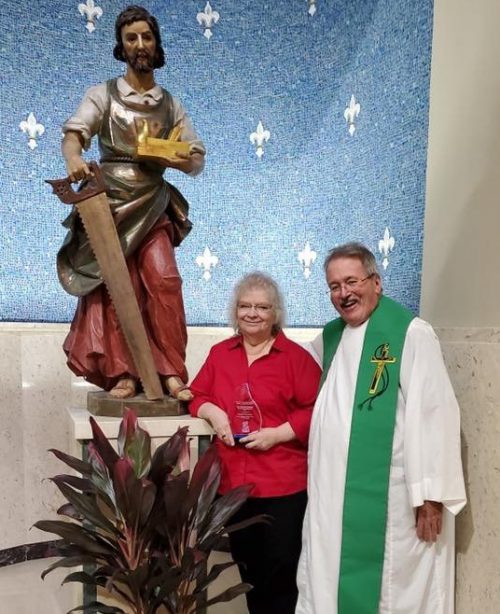 Sandra is a life-long member of Saint Marguerite d’Youville Parish in Dracut, Massachusetts; she also frequently worships with the Saint Joseph the Worker faith community in nearby Lowell. As a devout Catholic, she sees it as her responsibility to help those who are disadvantaged and she does so sometimes even at the expense of her own well-being. She manages this, all the while single-handedly providing for her family through her work as a model shop employee at Raytheon corporation.

Sandra was just 20 years old when she accepted the responsibility of leading multiple Catholic youth groups whose aim was to give under-privileged young adults the opportunity to celebrate their First Communion and Confirmation. Many of the young people came from difficult circumstances and she made a point to reach out to those very individuals, showing them respect, generosity, and giving them important responsibilities in the program.

Over the years she has continued to spread the love of Christ in diverse ways:  sharing the love and warmth of the season by crafting gift baskets for poor children during Christmas time; working in correctional facilities introducing and nurturing the faith to men seeking guidance and repentance; even traveling to India to serve as a volunteer at the world-renowned Mother Teresa Home for the Dying, and in many more ways too numerous to list.

Throughout her professional and personal life, Sandra Patenaude has epitomized Saint Joseph’s creed of resolute action demonstrating strong faith, love, and acceptance of God’s will. She’s done it all while providing for her family and lovingly raising her child in the hope that through her sacrifice, the torch of service to one’s neighbor could continue to light the world.

Sandra is indeed a worthy recipient of The Christian Worker Recognition Award. 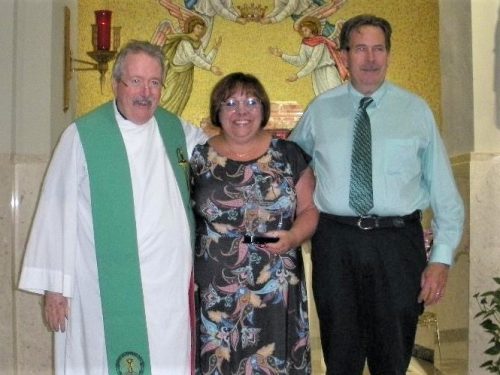 Dotti has been a practicing Catholic for most of her life and is currently a communicant at St. William of York parish in Tewksbury, Massachusetts, along with her husband Mike. Over the years, she has been actively involved in her faith community, serving in diverse roles: Eucharistic Minister, lector, music ministry. Additionally, Dotti has taught in the parish’s Religious Education Program for over 20 years.

Dotti views her nursing career as a Christ-called vocation and strives to demonstrate the Lord’s compassion each day. She uses her comprehensive nursing experience to serve as the Clinical Director at the Immaculate Heart of Mary Oblate Residence in Tewksbury, MA where she manages the skilled-nursing/assisted living component of this local community of retired Oblate priests and brothers, In addition, she works with the Provincial Administration of the Missionary Oblates to develop and achieve wellness outcomes for Oblates throughout the United States.

Mike McDermott, Dottie’s loving husband, has spent his entire life as a communicant of St. William of York parish in Tewksbury, having served at the altar as a boy and being actively involved in the Catholic Youth Organization (CYO) throughout his youth.

After spending time in the Air Force and the world of business, Mike came to the realization that his calling was to assist those in need rather than augmenting his own bottom line. He became a Certified Dementia Practitioner, and now works for Elder Services of the Merrimack Valley. His work involves ensuring that people with dementia and their families have access to the resources needed for their journey through this emotionally trying disease.

For 40 years has Mike enthusiastically involved himself in the religious life of his parish, serving as a Eucharistic Minister, and assuming leadership roles in the St. Vincent DePaul Society.

Both Mike and Dottie are passionately involved in the ACTS Retreat Movement. Dottie has served on the ACTS core team while both she and Mike foster involvement in the ACTS community, organize Mission trips, and take the lead in conducting ACTS retreats.

In their “spare” time, Dotti and Mike continuously celebrate their 43 year of marriage and the blessing of 3 grown children and a grandson.

Intensely dedicated to family, parish, the elderly and to a Christ-inspired lives, Dottie and Mike exemplify the virtues of St. Joseph, tirelessly working in a vocation of service to others. They are deeply deserving recipients of the Christian Worker Recognition Award. 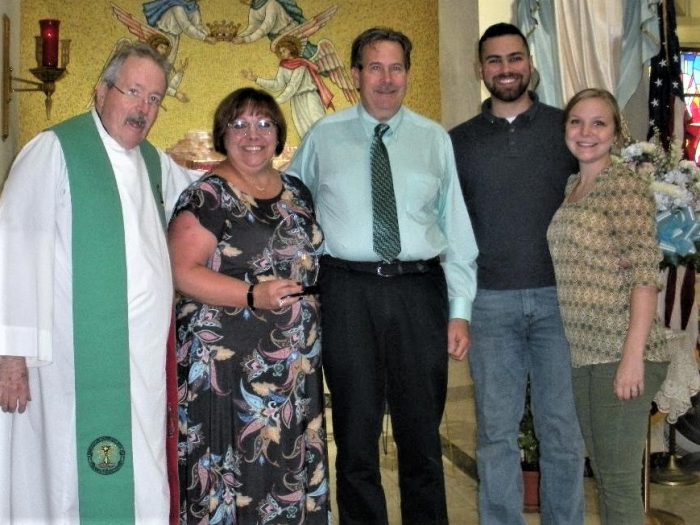