By Samantha Smith, Originally Published in the Georgia Bulletin 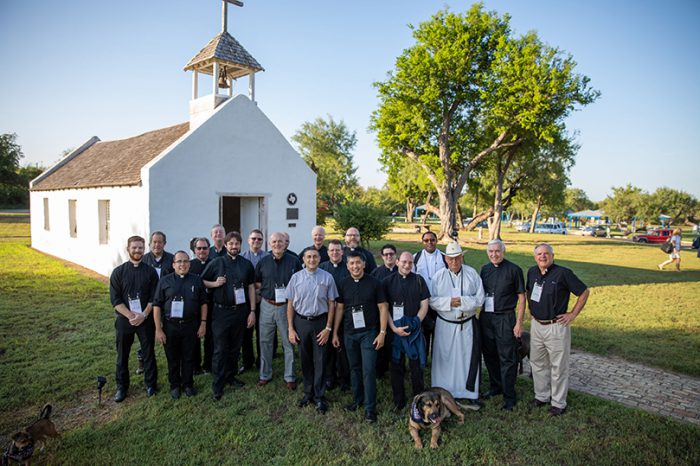 The group of 19 priests participating in the Catholic Extension trip to the Diocese of Brownville, Texas and Mexico visited La Lomita Chapel in Texas. The diocese is in the midst of a dispute over land adjacent to La Lomita, which the current administration has identified as a site where a new border wall would be built. Photo by Rich Kalonick/Catholic Extension.

ATLANTA—On Sept. 29, the Catholic Church recognized the World Day of Migrants and Refugees, an occasion to express concern for vulnerable people on the move and increase awareness about migration.

In his message for the day, Pope Francis challenged the way society views migrants, refugees, displaced persons and victims of trafficking.

“The presence of migrants and refugees—and of vulnerable people in general—is an invitation to recover some of those essential dimensions of our Christian existence and our humanity that risk being overlooked in a prosperous society,” he said. 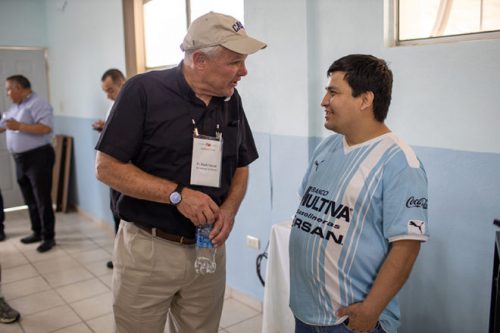 Father Mark Horak, SJ, speaks with a migrant hoping to apply for asylum in the United States at a shelter in Reynosa, Mexico. Father Horak was invited by Catholic Extension to witness firsthand the ministries to migrants at the country’s southern border. Father Horak is pastor at St. Thomas More Church, Decatur. Photo by Rich Kalonick/Catholic Extension

To learn more about the plight of immigrants, 19 priests from various dioceses joined Catholic Extension for a mission immersion program for pastors Sept. 16-18, traveling to the Diocese of Brownsville in Texas and a migrant shelter in Mexico.

After a personal invitation from Catholic Extension, Father Mark Horak, SJ, pastor of St. Thomas More Church in Decatur, invited two other Atlanta priests to join him for the experience. Father Victor Galier of St. Anthony of Padua Church, Atlanta, and Father Bryan Small from Sts. Peter and Paul Church, Decatur, accepted the opportunity to learn more about what is happening at the U.S. and Mexico border.

I wanted to “go down there and see it for myself,” said Father Small.

Since its founding in 1905, Catholic Extension has provided funding and resources to dioceses throughout the United States and other countries. The program supports poor and often isolated Catholic communities through various means, such as building and repairing church facilities, providing education for men and women religious and supporting campus and outreach ministries.

In 2018, Catholic Extension launched the mission immersion program for pastors, which allows them to experience the church in poor areas of the country. This opportunity allows clergy in impoverished communities to share their stories and reminds visiting priests that the church is larger than their own parishes.

This immersion program included priests from the Atlanta, Chicago, Boston and Louisville Archdioceses, as well as pastors from the Cleveland and Providence Dioceses. Catholic Extension financially supports ministries in the locations visited.