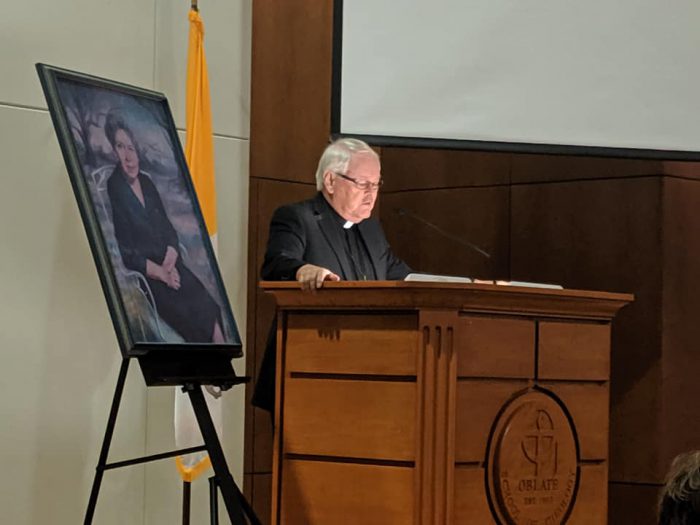 Oblate School of Theology marked the inauguration of its fourth teaching chair in 10 years Sept. 23, with a dinner acknowledging Elena S. Kenedy’s long friendship with the Missionary Oblates of Mary Immaculate.

The invitation-only dinner marked the formal establishment of the Elena S. Kenedy Chair in Missiology. Father Bob Wright, OMI, a professor at the School since 1984, was named the first holder of the chair. He has taught missiology, history and fundamental theology.

A $2 million gift to the School by its parent religious congregation, the Missionary Oblates of Mary Immaculate, enabled the School to inaugurate the chair.

Watch this short video specially created for the inauguration of the Elena Kenedy Chair of Missiology:

The Father Frank Montalbano Chair in Scripture was inaugurated in 2009, the Louis G.Vance Chair in Systematic Theology in 2015, and the Deacon Robert and Ruth Kusenberger Chair in Oblate Studies in 2017. The School hopes to raise enough funds to establish several more endowed chairs in the future.

Fr. Ron Rolheiser, OMI, President of OST, recalled that in 2008, the late Tom Benson’s transformational gift to kick off OST’s capital and endowment campaign reflected his more than 50 years of friendship with the Oblates, and prompted a comment that such a gift “must mean that the donor thinks the school is really worth it.”

As a missionary congregation, he noted that the Oblates’ focus is not on maintaining the Church but on spreading the faith and bringing people into the Church. Currently, “The hardest missionary field in the world is not Africa, Asia and all the places we used to go; it’s our own children,” he said. “This gift will be used to reflect on that…we hope this gift will go on for a long time – 150 years or more,” Fr. Rolheiser commented.

He explained that that the Church today must minister to a multicultural society. The task of missiology is to work with a variety of issues of integration and enculturation of Hispanics, Vietnamese and many other nationalities. “This gift for a chair in missiology couldn’t be more appropriate for the Oblates,” he commented.

Fr. Rolheiser also said that while Oblate School of Theology is more than 100 years old, its attitude must be that it is “just starting.” He noted that any organization, as soon as it stops growing, begins to die. He expressed confidence that the gift from the Oblates’ United States Province “is going to bring new life for our family.”

Dr. Scott Woodward, Vice President for Academic Affairs and Dean of OST, declared that the mutual task of the School and the Province is to celebrate not only the $2 million gift but “the many great gifts the Kenedy family has given to the Church and to the Oblates over the years.”

Fr. Jim Chambers, OMI, treasurer of the Oblates’ U.S. Province in Washington, D.C., said the establishment of the Kenedy Chair acknowledges a great legacy that Elena Kenedy left to the Oblates and that “keeps on giving.”

Fr. Chambers noted that many discussions, involving many Oblates, centered on what would be the best way to honor Elena Kenedy and her family for all they have meant to the Oblates’ ministry in South Texas. “It almost became a no-brainer that the best way would be a teaching chair at OST.”

The Oblates have thanked the Kenedy family often, he said, but “it always has remained a little hollow because it was just a thank-you. The Oblates need a thank-you that really means something. One of the best places the U.S. Province could give to is Oblate School of Theology to train future missionaries.”

Fr. Wright shared several stories about Mrs. Kenedy and the Oblates’ friendship with the Kenedy family, dating back to 1852. He said she appreciated the pastoral care the Oblates gave her and her family and often did thoughtful favors for Oblate novices who lived on the Kenedys’ La Parra Ranch near Sarita, Texas, when the Oblate novitiate was there from 1961-73. She had a small chapel on the ranch enlarged and before they arrived. Her sister-in-law, Sarita Kenedy East, willed her large ranch house to the Oblates, and Elena Kenedy had a room on the first floor converted into a chapel.

Pablo Suess, a nephew of Mrs. Kenedy, described her as a lady of strong character who was “very sweet and very private. Elena knew of the very hard work of the Oblates evangelizing South Texas,” he said, adding, “I’m sure that she would be very proud of the good work the Oblates are doing and will continue to do.”