Our first story is from David Rizo, Youth Ministry Leader, about something that happened last Thursday that was very moving for him.

Every Thursday we serve food on the street of our community for people in need.  Most of these people work by recycling trash from the streets.  We usually have several youth volunteers that cook tacos and then serve the people.  We feed about 40 persons every week, and we give them as much food as they can eat (some of them eat 6 or 7 tacos). We have been doing this for 2 months and people are now coming back to get a free and warm meal.  Some of them are really friendly and they love to share with us where are them from, and how much they earned that day (about 6 dollars per day).  They really like seeing young people doing this kind of thing. They said that it is not only very uncommon, but especially from young people with a smile on their face and willing to give them a genuine hug, 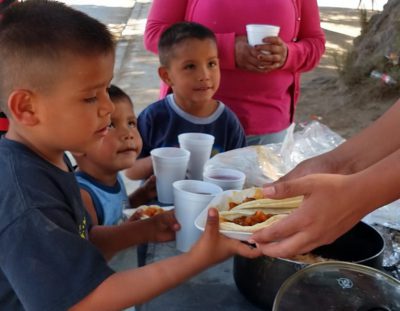 This week there were only two of us, since our usual crew was at another event. After we had served most of the people, I saw a kid walking with his head down and he had a really sad face.  I asked him “Do you want something to eat?” and he said no.  I said “Come on, it is completely free”.  His face changed and he said yes. His name was José and he was only 10 years old. So I started talking to him, and he told me his mom was working.  She never goes to pick him up after school and he has to walk home by himself every day.

It was like I was looking at myself.  I remember when I was a kid in the school and my mom was not able to get me from school because she worked.  Sometimes I did not have anything to eat until 6 pm, so I know exactly how José feels; to be hungry and just see food on the streets, but not be able to buy any. I wanted to tell him not to worry because things will get better, and not to give up on school, trust in God all the time, and never doubt Him, Your mom loves you but she has to work so you can go to school.  Be a good person and fight for your dreams.

When he finished eating I gave him a big hug, and with a smile on my face I told him “God loves you”.

I wanted to share this story with you because I really want to thank you for all the things you are doing for my community.  It is not just some food, clothes, blankets and other “things”.  You are giving hope, showing us the love of God, inspiring our community to help each other, and do something this without judging. 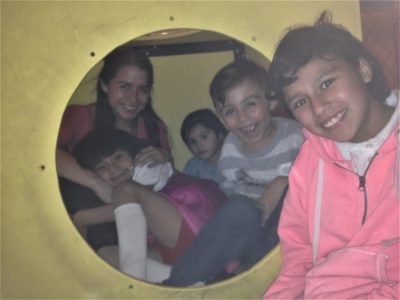 In an unrelated event, we celebrated a 5 year old girl’s birthday.  She is one of six children, who lost their mother in an accident almost a year ago.  We have helped the family during this time and celebrated other birthdays with them. We took them to the mall and ate pizza.  It was their first time to the mall and they were really excited by all the stores and displays.  The pizza place we went to had a McDonald’s-like play area and they had a ball.  The trip down the escalator was way scary and one had to be rescued while backpedaling, albeit not fast enough. Father Jesse says that when one of the little girls comes forward during mass for a blessing, she always unfolds her arms and gives him a hug.  The father (shown with a hat on) makes his living my picking up recyclable materials and carting them 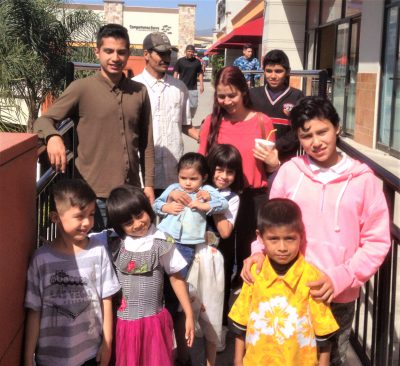 off to the recycling center a few miles away.  They live near the railroad tracks so those of you who have been here know that is one of the poorest areas.  Also shown in the picture in the upper left is Eduardo (our resident psychologist) and his wife Adriana (our scholarship administrator), who many of you know.

Lastly, as has become our privilege, here is our featured student.  His name is Del Angel Jose Alexis and he recently graduated with a degree in communications thanks to his sponsor, Sal Casola.