“In the prolonged silent prayer we make each day, we let ourselves be molded by the Lord, and find in him the inspiration of our conduct” (OMI Rule of Life, 33).

This is a practice that Eugene wanted the members of his religious family to maintain. This is why you are invited to take part in this practice of Oraison on Sunday, November 17, 2019, as we remember the feast of the Spanish Oblate Martyrs later this month. 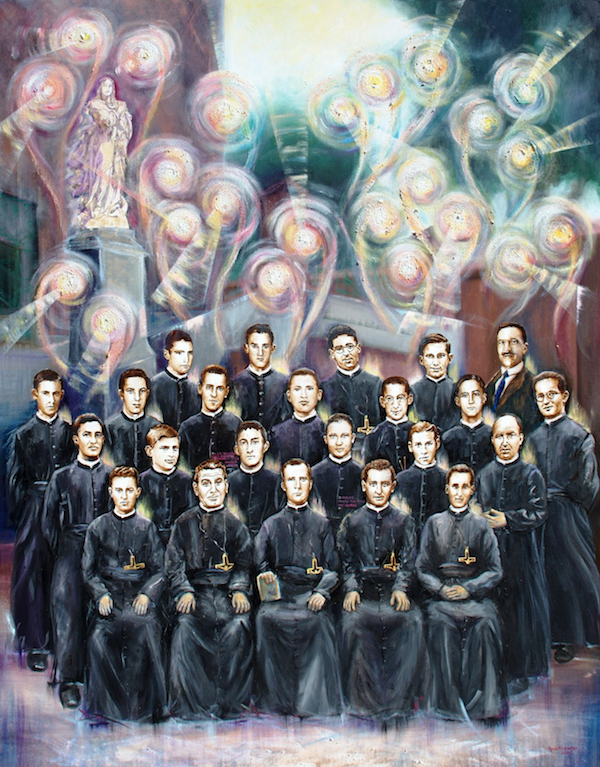 The three-year period from 1936 until 1939 was a time of bloody martyrdom for the Church in Spain. During this religious persecution, there were thousands of people who suffered violent death. Within this general climate of hatred and antireligious fanaticism, one may justly place the martyrdom of 22 Oblates: priests, brothers and scholastics from Pozuelo de Alarcón (Madrid). On July 22, 1936, a large contingent of armed militia attacked the Oblate house. The Oblates were made prisoners in their own house. On the 24th, at about three in the morning, the first seven were executed. On November 7, two more were and on November 28, the remaining thirteen.

No one has greater love than this, to lay down one’s life for one’s friends. You are my friends if you do what I command you.

Excerpt from the Deposition of Father Felipe Diez Rodriguez

From the first moment we were detained, in each one of us, there was a presentiment that we would be assassinated because of our status as religious.

Yet, within us, all that transcended was the spirit of forgiveness on the one hand, and on the other, the desire to offer our lives for the Church, for the peace of Spain, and those whom we thought were going to shoot us.

The only motive that guided us was supernatural, since humanly we were to lose everything. We knew that if we were killed, it would be because of hatred for the Christian faith…

As for the place of martyrdom, the first seven of Pozuelo, I have already stated that we do not know where they were killed; of the others, we know they were murdered in Paracuellos de Jarama. At the time of their death, I heard that there was someone, who by their description matched that of Father Esteban, who asked permission to give absolution to the companions. And whose last words were: “We know that we are murdered because we are priests and religious. We forgive you. Long live Christ the King!”

“Final perseverance, and even martyrdom or at least death while tending victims of the plague, or any other kind of death for God’s glory or the salvation of souls. “

(One of the intentions for which he offered his first Mass, E.O. XIV n.100)

For further reading, we recommend this material on the OMIWORLD website: https://www.omiworld.org/wp-content/uploads/09-The-Oblate-Spanish-Martyrs-1.pdf