“In the prolonged silent prayer we make each day, we let ourselves be molded by the Lord, and find in him the inspiration of our conduct” (OMI Rule of Life Constitution, 33).

This is a practice that Eugene wanted the members of his religious family to maintain. This is why you are invited to take part in this practice of Oraison on Sunday, December 15, 2019, as we remember the feast of the six Oblate Martyrs of Laos and the Oblate lay catechist on December 16th. 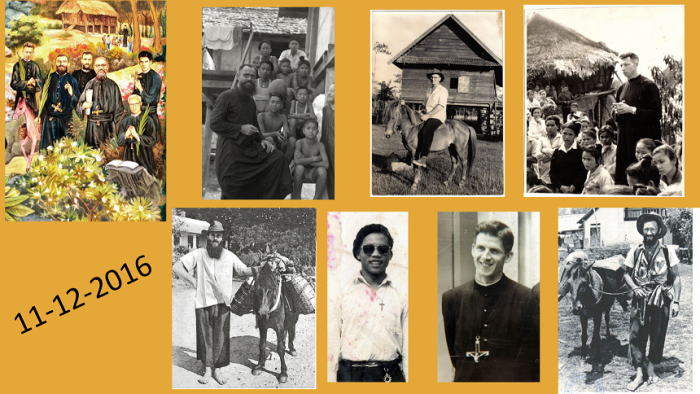 During the Indochina War, between the years 1954-1970, seventeen followers of Christ in Laos suffered martyrdom for the sake of His name. Among them were six Oblates of Mary Immaculate who offered their lives in sacrifice so that the Gospel could be heard: Fr. Mario Borzaga OMI, Fr. Louis Leroy OMI, Fr. Michel Coquelet OMI, Fr. Vincent L’Hénoret OMI, Fr. Jean Wauthier OMI, Fr. Joseph Boissel OMI, and one of their catechists, Paul Thoj Xyooj. The Church in Laos recognizes these blessed as their founding fathers.

On April 18, 1961 Fr. Louis Leroy was praying in his poor church. A detachment of guerrilla soldiers came to get him. According to the villagers, he knew this was his final departure: he asked permission to put on his cassock, put his cross on and with his breviary under his arm said goodbye. Without a hat and barefooted he followed the soldiers. In the forest, a few shots and it was over…. His childhood dream of witnessing to Christ, even in martyrdom, was granted.
He had written to the Superior General of the Oblates: “Before I knew the Oblates the missions in Asia attracted me, and I wanted to leave my work as a farmer for these missions…. The difficulties the Laos mission has had and perhaps will have again have only increased my desire for this country…. I would be very happy to receive my obedience for Laos if you feel it is good to send me there….”

“In my prayer, I do not ask Jesus for joy or strength; I ask only to love him more and more—to love him as the saints and martyrs loved him.”

How happy they are to be able to sacrifice themselves for their brothers whom they are sanctifying, saving, placing in glory, at the price of their lives, like our Divine Master who died for the salvation of people! How admirable they are! But also, how fortunate, these dear martyrs of love! What a beautiful page in the history of our Congregation! (Letter to Bruno Guigues, 1 August 1835, EO VIII n 529)

For further reading we recommend the following article on the OMIWORLD website: https://www.omiworld.org/our-charism/our-saints/oblate-causes/the-6-blessed-oblate-martyrs-of-laos/short-biographical-notes/