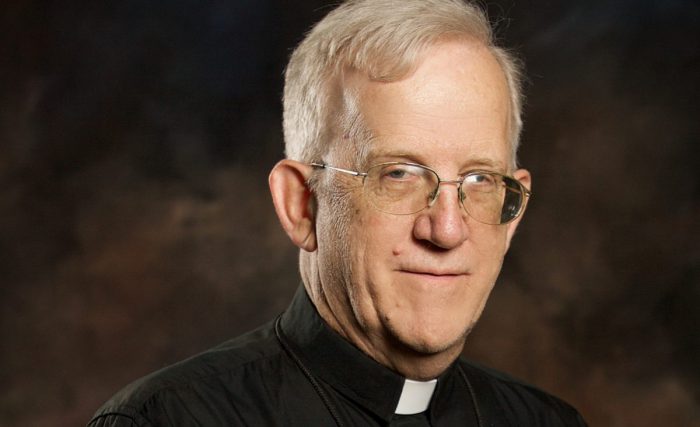 Father Bob Wright, OMI, who has taught at Oblate School of Theology since 1984, is a natural choice as the first holder of OST’s newest endowed chair, the Elena S. Kenedy Chair in Missiology.

Young Wright professed his first vows in 1967. During six years of philosophy and theological study in Rome, he learned about the Oblate mission, matured as a religious person, studied hard and experienced different cultures. He enjoyed philosophy and earned a license in theology before returning to Texas.

His familiarity with northern New Mexico from childhood planted the seeds for Fr. Wright’s lifelong interest in Hispanic ways of celebrating the liturgy and prayer. He was assigned to San Juan on the Texas-Mexico border.

“That was very good for me; it was almost 100 percent Mexican American,” the priest recalled. His six years of learning Italian helped him pick up Spanish since the two languages are similar. He learned to work with young Oblate priests, two Hispanic sisters and two very skilled laypeople.

“I learned about team ministry and base communities there. I helped teach Bible classes at Pan American University, visited the county jail and helped with liturgy. It was very educational in getting to know and appreciate the people and learning their culture.”

Ordained in December 1974, Fr. Wright stayed in that assignment for four more years. In 1979, he went to the Graduate Theological Union in Berkeley, Calif., earning a PhD in theology and culture several years later. “I wanted to study how people’s personal piety related to official theology and how they affected each other,” he explained. “That’s where I got my interest in studying Hispanic history and culture. I was with these people who were coming to church all the time. I was reading about Mexican Americans being only nominal Catholics, but that was not my experience at all. I wanted to study why this was happening and why they were seen that way,” Fr. Wright explained. He wrote his dissertation on Hispanic popular piety and theology in the Texas borderlands.

Fr. Wright has taught an introductory course for about 30 years on missiology and about the interaction of faith and culture in the past and present. He has also taught the history of Hispanic Christianity, first in the Southwest and more recently throughout the United States. He hopes to publish a textbook on Hispanic Christianity in the United States. He has written many essays on the missionary work of the Oblates in Texas and New Mexico, and has been invited to speak in Rome and the Philippines about the Church’s mission today. Fr. Wright has participated in mission gatherings in Guatemala and Mexico. He sees the new endowed chair as a welcome recognition of OST’s preparation of many people for the Church’s mission for more than a century and the work of many past professors, such as Bernard Doyon, OMI, and Fr. Ronald Young, OMI.