This is a practice that Eugene wanted the members of his religious family to maintain. This is why you are invited to take part in this practice of Oraison on Sunday, January 19, 2020, as we remember the anniversary of the founding of the Oblates (at that time known as the Missionaries of Provence) on January 25th.

The all-important first day of community life for the Missionaries was obviously a story often repeated in all its details. In his Memoires, Father Tempier, described it as: “This memorable day that I will never forget for as long as I live.” He narrates the story of the beginning of their religious family, and draws a conclusion linked with the vow of poverty and the call to simplicity. 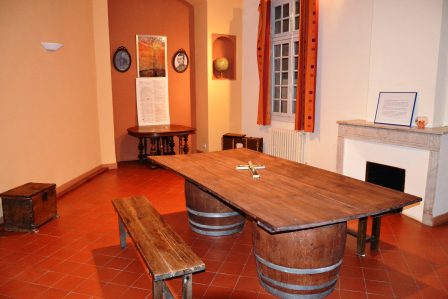 Tomorrow I celebrate the anniversary of the day, sixteen years ago, I left my mother’s house to go and set up house at the Mission. Father Tempier had taken possession of it some days before. Our lodging had none of the splendor of the mansion at Billens, and whatever deprivations you may be subject to, ours were greater still. My camp-bed was placed in the small passageway which leads to the library: it was then a large room used as a bedroom for Father Tempier and for one other whose name we no longer mention amongst us. It was also our community room. One lamp was all our lighting and, when it was time for bed, it was placed in the doorway to give light to all three of us.
The table that adorned our refectory was one plank laid alongside another, on top of two old barrels. We have never enjoyed the blessing of such poverty since the time we took the vow. Without question, it was a foreshadowing of the state of perfection that we now live so imperfectly. I highlight this wholly voluntary deprivation deliberately (it would have been easy to put a stop to it and to have everything that was needed brought from my mother’s house) so as to draw the lesson that God in his goodness was directing us even then, and really without us having yet given it a thought, towards the evangelical counsels which we were to profess later on. It is through experiencing them that we learnt their value.
I assure you we lost none of our merriment; on the contrary, as this new way of life was in quite striking contrast with that we had just left, we often found ourselves having a hearty laugh over it. I owed this tribute to the memory of our first day of common life. How happy I would be to live it now with you!

Some texts to aid us in our prayerful reflection:

Acts 4:32-33:
The community of believers was of one heart and mind, and no one claimed that any of his possessions was his own, but they had everything in common. With great power the apostles bore witness to the resurrection of the Lord Jesus, and great favor was accorded them all.

Matthew 28: 19-20:
Go, therefore, and make disciples of all nations, baptizing them in the name of the Father, and of the Son, and of the Holy Spirit, teaching them to observe all that I have commanded you. And behold, I am with you always, until the end of the age.

Article 3 of the OMI Constitutions and Rules applies to the whole Mazenodian Family:

The community of the Apostles with Jesus is the model of our life. Our Lord grouped the Twelve around him to be his companions and to be sent out as his messengers (cf.    Mk    3:14). The    call and the presence of the Lord among us today bind us together in charity and obedience to create anew in our own lives the Apostles’ unity with him and their common mission in his Spirit.