Parts of Australia, especially in the States of Victoria and New South Wales, are suffering a horrendous toll due to bushfires and drought with some small towns being wiped off the map.

The present fires we are experiencing are staggering for their duration, size and impact. 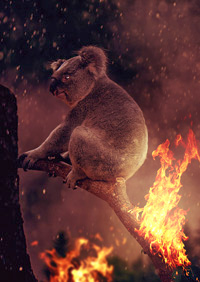 The Oblate parish of Eagle Vale on the edge of Sydney is around an hour’s drive from one ferocious fire that caused considerable loss of property to their south west, and yet another to their north west burnt thousands of hectares of the famed Blue Mountains.

The East Gippsland, Victoria, fires have been burning since mid-November with approximately 350 houses and businesses destroyed, close to a billion native animals and livestock killed and more than 1.4 million hectares burnt out in Victoria, whilst nationally the figure is close to 8 million hectares. The Gippsland fires are taking their toll on the local communities as they are summer holiday destinations. Like scenes from the Second World War Dunkirk evacuation holiday makers and local people were forced to take refuge on beaches and in the ocean to escape the fires and some were then evacuated by Australian Navy ships to Melbourne.

The bushfires are on top of a four-year drought with farming families and their cattle struggling to survive.

These present fires are approximately 4 hours east of the nearest Oblate parish which is our Parishes in Partnership of Moe/Newborough. Fr Harry Dyer OMI, Parish Priest and volunteer Police Chaplain, has visited the local emergency relief centre and hospital to be of assistance where needed. 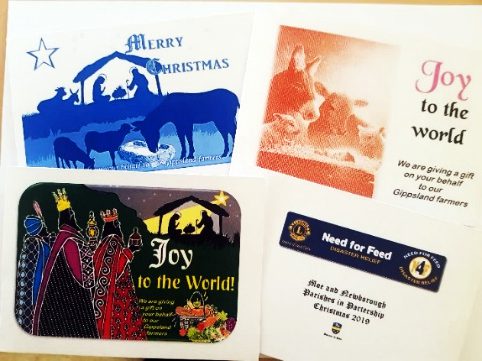 At the initiative of an Oblate parishioner, Christmas cards were produced of varying cash amounts ($40 for hay – $20 to supply drinking water – $10 for essential living items) to assist the drought relief. Parishioners were encouraged to buy a card and send it to their families and friends instead of Christmas presents. At short notice over $3,000.00 was raised through this effort. In response to this local parish initiative the Australian Oblate Province and MAMI are also generously contributing to these needs.

There has been an enormous outpouring of support in a variety of forms from Australians and from overseas.  The Australian Province would like to thank the Congregation for their prayers and messages of support that we have received.

We are desperately praying for good soaking rain to quench the fires, to bring life to our fields and fill our dams with fresh water.