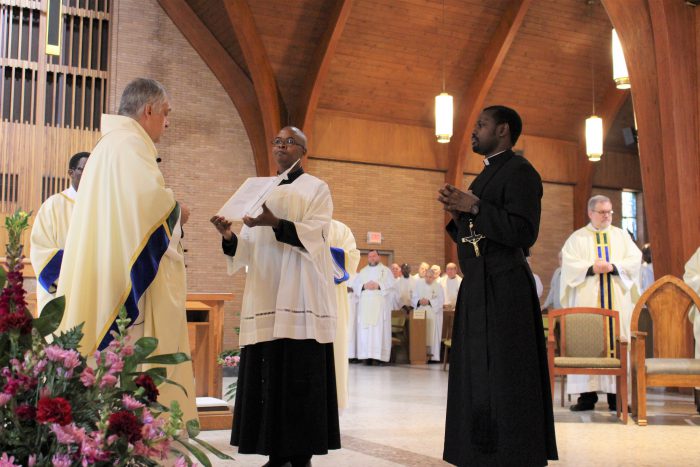 What does a young Oblate brother from Zambia and a legendary American scripture scholar have in common?  Everything. 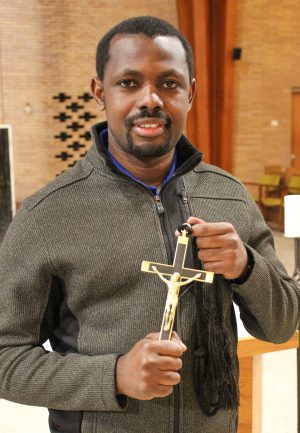 Bro. Eugene and the Cross which once belonged to Fr. Montalbano

In February Bro. Eugene Mwape Mule, O.M.I.  made his perpetual vows in San Antonio, Texas.  During the ceremony he received the Oblate Cross of Fr. Frank Montalbano, O.M.I., who spent more than 50 years teaching seminarians before passing away at the age of 97 in December.

“I met Fr. Frank after he moved into Madonna Residence where our elderly Oblates live in San Antonio,” said Bro. Eugene.  “Father Frank became my friends and an inspiration.  One day I would like to also become a teacher of Scripture, and that is why I chose to receive his Oblate Cross.”

Brother Eugene is scheduled to be ordained later this year.  He will carry his cross to a yet to be determined mission.  He is already use to being a missionary, having been away from his native Zambia for the past eight years.  As a seminarian, he has already studied and ministered in Cameroon, the United States and Canada.

Father Frank wasn’t quite the world traveler, but he helped to shape Oblate priests and brothers who have ministered in every corner of the world. 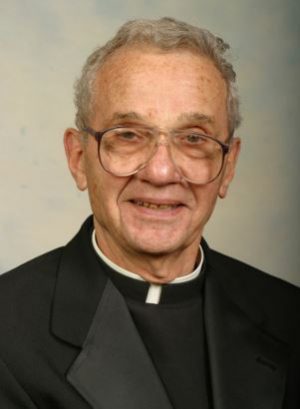 “It has been a special gift from God to enable me to bring His word to seminarians for so many years,” said Fr. Frank shortly before he retired in 2005.

After moving into the Madonna Residence, Fr. Frank continued to assist and give advice to seminarians studying next door at Oblate School of Theology.  That’s where he met Bro. Eugene, and now he will be forever linked with the Zambian Oblate.

Although Fr. Frank was an accomplished scholar, his life prayer was very simple.  It is a prayer that is now being passed on to the next Missionary Oblate priest.

“My prayer is that all priests be gentle, ardent and courageous ministers of the Sacred, men of joy in priestly service like Christ, the Eternal High Priest, and that we be men of joy when celebrating the Eucharist – not performers on stage – but serving God at two tables – the table of the word and sacrament.”

History of the Oblate Cross 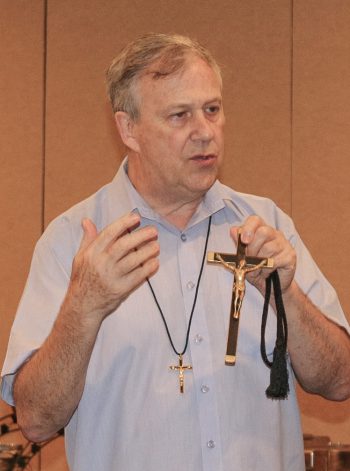 St. Eugene de Mazenod’s cross is passed down to each Superior General. Fr. Louis Lougen is the current keeper of the cross.

Saint Eugene De Mazenod, Founder of the Missionary Oblates, had a passion for the cross that he instilled in all of his Oblate brothers.  He felt that the cross was a sign of Jesus’ sacrifice which redeems sinners and re-establishes the covenant with God.  Furthermore, it was a sign of love and reconciliation.

The founder wished each of his missionary sons to wear a missionary cross as a distinctive sign of conversion.  He wanted the cross to be “a sacred sign of our apostolic mission” as well as “an essential part of our religious habit… given on the day of profession as a distinctive sign of our ministry.”   Oblates have since always carried their Oblate Crosses to their missions around the world as a sign of God’s mercy, and as a constant reminder of the virtues of humility, charity and modesty.

By 1830, the passing on of the missionary crosses from deceased Oblates to new Oblates was already part of the Oblate tradition.  Each new Oblate received the cross of one of his deceased brothers so that he could be inspired by and further the legacy of his predecessor.  This tradition of passing on the Oblate Cross is still an important part of Oblate perpetual vows ceremonies.  The passing on of the Oblate Cross is not just a continuance of the legacy of St. Eugene De Mazenod but it is also a symbol of Oblate brotherhood in Christ.