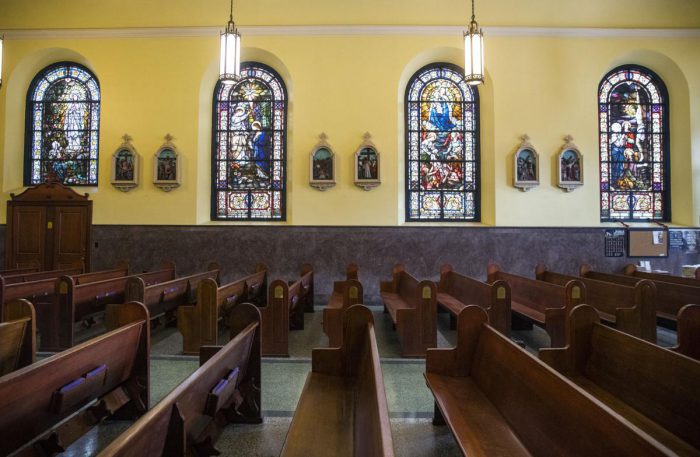 Our Lady of Guadalupe Church holds noon Mass to empty pews as they go live on Facebook Saturday April 11, 2020. The church, originally called the Mortuary Chapel was built in 1826 as a burial church during the Yellow Fever pandemic. (Staff photo by Sophia Germer)

They did know that people were dying, and that something was causing it.

Maybe it was bad air, or “miasma,” as it was known. Or maybe “exhalations of the dead” were to blame, some said.

To combat the former, cannons were periodically fired into the air to “break up” the miasma. To spare congregants of St. Louis Cathedral from those suspect exhalations, a mortuary chapel was built at the back of the French Quarter — right across Basin Street from St. Louis Cemetery No. 1 — to host funerals of yellow fever victims.

Those cannons, of course, have long since fallen silent. The old chapel, however, still stands at Rampart and Conti streets, recognized as the oldest church building in the city and — having gone through numerous incarnations over the decades — standing as a nearly 200-year-old reminder that there is, indeed, life after epidemics.

Today, it is known as Our Lady of Guadalupe Church, home of shrines to St. Jude, he of lost causes; St. Expedite, whose complicated but amusing backstory we’ll save for another day; and to the city’s fallen police officers and firefighters.