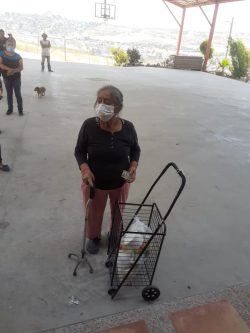 As we help the community with despensas (care packages), we are especially cognizant of the elderly. People over 60 have not been allowed to work at their jobs in the factories. And many elders make a little money bagging groceries for tips at local stores, which they also are not currently allowed to do. We often visit an elderly person and find they truly have little in the way of a support network.

We are being called in more often to assist with the death of a person in the family. Perhaps, in part, this is because we are getting out into the communities more, but also, we believe it has to do with the impacted healthcare system. Two of the major hospitals servicing the area have become
primarily focused on corona virus, making it difficult for people with other conditions to receive help. One such situation concerned our long-time friend, Fermin, a double amputee. He developed complications, and not able to get into one of the primary hospitals, was sent to a remote one. It turned out they did not have what was needed for his care, so he was sent back to the primary hospital. He seemed to recover a bit, but on day 3 passed away. A few days later, Eduardo, our resident psychologist, accompanied us to talk with the family who was really struggling.

In another situation, we visited an elderly man and his wife for the first time. The wife was 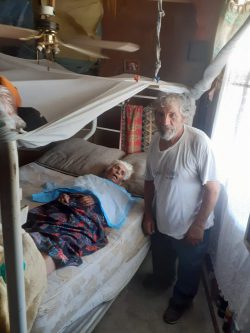 bedridden, and the man was genuinely concerned. After delivering some food and medical supplies, we got a call two hours later that she had died. We returned that afternoon at the request of the husband to help with funeral arrangements. We prayed with him and a neighbor and referred him to the Church office for further help. We were called into another home where the father had died, and the family was having difficulty. We were too late to offer financial assistance as the hospital had already disposed of the body in a common grave, because the family was unable to raise the money to recover the body.

Our resident psychologist, Eduardo, reports the following: The Covid-19 pandemic has changed the way we offer psychological services, which are now generally done via video conference or by telephone. The social distancing and stay-at-home quarantine have had several effects on people’s mental health. First, the economic stress on families, who have lost their primary sources of income, has engendered depression and stress. There is uncertainty about when they will be able to return to work plus, how to provide for their families on a day to day basis. This depression and stress sometimes leads to drug use. 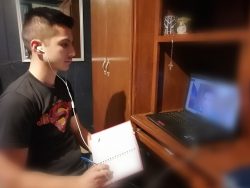 Those who become infected with Covid-19 try to isolate themselves in what can already be a small and cramped household. For some young people, this leads to fear, depression, and/or stress as they attempt to confine themselves to just a bedroom in order to minimize the risk of infecting others, especially their elders.

Then there are those families who have lost a loved one either directly or indirectly to Covid-19. One 49-year-old man who worked in a factory became infected. He had a history of hypertension and diabetes. After 5 days his health had deteriorated to the point of needing hospitalization. He died after three days in the hospital. His wife is currently receiving counseling.

The shutdown of the schools and university also can create stress in the home. Some of our youth going to college report that it is difficult to study and participate via online classes, in part because of all the homework that is being required. But also, they are immersed in a home environment that may be experiencing undo hardships. Eduardo reported receiving a call at 3:30 AM a few nights ago to counsel such a youth.

Here is the application for scholarship essay for Maria Guadalupe Morales Rodriguez, who is the recipient of a scholarship from Kevin Crane.

My name is Maria Guadalupe Morales Rodriguez, and I am 21 years old. I was born in Tijuana, Baja California. I am currently studying foreign trade and customs at university. I am specializing in global trade logistics. I was taught to go to church and to service. As I grew older this became my own decision, because I love to serve others and to be close to God. 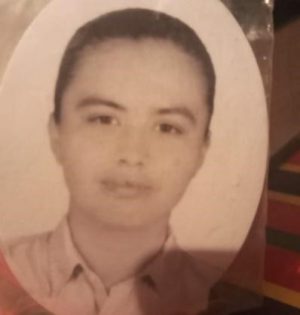 I like sports and used to play soccer. However, I do not have the time now. I also like video games, going to the beach, hanging with friends and family, and reading. My mother and father came to Tijuana more than 18 years ago. My father is an independent construction worker, and my mother is a housewife. There are seven children in my family: Rosa Maria, Eduardo, Jose Luis, Guadalupe, Alondra, Jose Miguel and Carolina. Currently two of my brothers and I are studying at university, and two of other siblings are in high school.

My biggest challenge with going to college is that my father believes that women’s role is to stay at home and not have a career. My mother is the one who figured out a way to get money so that I could go to school. Going to college has been a dream of mine since I was little. My ultimate goal is to have a career where I am a somebody and someone who excels in the workplace.

Once I finish my degree and am working, I will be able to support my church, including organizing events. I also will help other students with their studies, using the knowledge that I have gained.

Thank you in advance for reading my little story.