“In the prolonged silent prayer we make each day, we let ourselves be molded by the Lord, and find in him the inspiration of our conduct” (OMI Rule of Life, 33).

This is a practice that Eugene wanted the members of his religious family to maintain. This is why you are invited to take part in this practice of Oraison on Sunday, June 21, 2020, as we commemorate the feast of Blessed Józef Cebula, O.M.I. on June 12th. 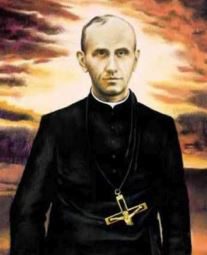 Jesus said to them: “Can you drink the cup that I am going to drink?” They said to him, “We can.” He replied, “My cup you will indeed drink, but to sit at my right and at my left, this is not mine to give but is for those for whom it has been prepared by my Father.”

“Father Cebula was in no way a worldly man He was not brilliant. He led a simple, ordinary life, but in a spirit of faith. … He lived his priestly and religious life in a profound way. He got along well with others even though he did not have a winning manner nor was he outgoing.” (Jan Geneja O.M.I., May 29, 1992)

His words were simple but penetrated to the very depths of one´s heart. They would lead us to reflect on the meaning of life. … Father Cebula was also much sought. Long lines would form up outside his confessional.” (Mrs. Franciszka Koloch, 1993)

In 1939, when the Germans occupied Poland, they declared loyalty to the Church illegal. On May 4, 1940, the Oblate novices at Markowice were arrested by the Nazis and sent to the concentration camp at Dachau, Germany. However, Father Cebula continued to minister as a priest in secret, despite the ban on it, until he was arrested on April 2, 1941.

“During the days of his house arrest, Father Cebula´s life was difficult. It became even more difficult after the deportation of the [novices]… During the day, he worked as a simple laborer; in the course of the night he celebrated Mass; in secrecy and disguised, be brought consolation to the dying… and baptized the newly born.” (Jan Nawrat O.M.I., December 29, 1948)

Sixteen days later, he was taken to a concentration camp at Mauthausen in Austria and was harassed and forced to work hard. Three weeks later, on May 9, Father Cebula suddenly summoned up his strength and said, “It is not you who are in charge. God will judge you.” The Nazis ordered him to run, with a rock on his back, towards the camp’s barbed wire fence, where a guard shot him to death with a submachine gun and declared that Father Cebula “was shot while trying to escape”. His body was taken to a crematorium and burned to ashes. He was beatified by Pope John Paul II on June 13, 1999 as one of the 108 Martyrs of World War II.