“I was hungry and you gave me to eat”

Being true to their charism to be close to the poor, many Missionary Oblates in all of the five OMI regions, took a number of initiatives to feed the hungry during the coronavirus lockdown period. 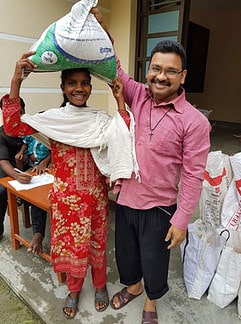 Oblates in Bangladesh reached out to those in dire poverty whose sustenance mostly depended on daily wages. With the imposing of the lockdown, they struggled financially, and as a result, found it difficult to feed their families. The Oblates regularly provided them dry rations and food parcels. “We are grateful especially to Centre Missionnaire Oblat (CMO) in Canada who financially supported our project”, Fr. Ajit COSTA, the Delegation Superior, said. Not only many Oblate Parishes but also the Scholasticate community organized programmes to feed the hungry on a regular basis during this critical period.

In Laayoune, in the OMI Mission to the Sahara, through a local Association, all of them Muslims, the Oblates cooperated in the distribution of food and hygiene products to the many sub-Saharan migrants who are the most deprived population. About 800 people benefited from these actions. Also for the migrants in Dakhla (540 km away) our volunteers managed to organize actions sponsored by the local authorities. Some 200 migrants received special follow-up, especially vulnerable women and children. In El Marsa too, through Muslim friends, the Oblates managed to attend to the most abandoned. “Every day in our daily outings we intentionally met the poor of the street whom we tried to help in a discreet way, apart from the people who came knocking at the door of the house”, Fr. Luis Ignacio ROIS (Chicho) said.

The small Oblate community in Luxembourg (Benelux Province) generously shared their food and other essentials with the poor and the abandoned who rang the doorbell of their house. After a community discernment, they also decided to support a monastery in Staniątki, Poland, where the nuns had been struggling without the necessary means of subsistence. The Holy Cross Parish in Rome, Italy, did not turn their back to those refugees and homeless who came seeking for food. With the help of the Caritas group that is active in the parish, the parish was able to help them. “I would like to emphasize that, if we manage to do this small service, it is mainly thanks to the generosity of many faithful of the parish,” Fr. Nino BUCCA acknowledged. Saint Blaise’s Oblate Parish in Asunción, Paraguay, organized two dining rooms to feed those who lost their jobs. They fed 570 people per day from Monday to Friday. The community in Santa Fe also doubled the lunch boxes provided for the poor during these difficult times. Our communities and parishes in Nigeria reached out to the poorest of the poor by providing them yam, beans, rice and condiments. In another innovative move, the Oblates in Indonesia reached out to the university students who were locked down in their boarding rooms. They were away from their homes and some of them found it difficult to sustain themselves. Oblates came to their aid.

The Oblate community in José E. Rodó parish in Uruguay, and the Oblate youth residing in our Casa Juvenil, distributed what they call “food baskets” among the less fortunate, with the help of the local authorities.

The Province of India reached out to the most deserving people (orphans / semi-orphans, widows, uncared elderly, gypsies, tribal families, Dalit Christians, refugees from Sri Lanka, etc.) through their collaborators and MAMI Members.  In response to the current situation, the Province created the Oblate Disaster Management Team (ODMT) to plan and to respond to this situation in an organized manner. In the first phase itself, they reached out to more than 2250 families, providing them with rations of food essentials.

In Pakistan, too, in almost all the parishes we serve, including the desert mission station in Derekabad, the Oblates were able to help the needy in many ways. At Holy Rosary Parish in Gujrat, the Oblates collaborated with Muslims of the area and distributed food rations to the needy. Anglo-Irish Province: The Oblate community at the Sacred Heart parish in Kilburn, London, ran a food bank from the parish house. On a daily basis, they distributed over 30 hampers of food. Not only parishioners but also the neighbouring Jewish Community and the Church of England Community helped them in this task. Fr. Ray WARREN, is involved with an inter-faith group called ‘Open Table,’ that reaches out to the homeless and rough sleepers in London. “Once a week we prepare wholesome home-cooked food and then, at 9 pm, we set up a table on the street outside the local rail station. Between 40 and 50 people come along, and we serve them the food in containers that they can take with them, along with tea and coffee. I am particularly inspired by the cooperation and support that has grown between all of us, Muslim, Christian, and other religious & non-religious,” Fr. Ray further stated. Oblates and lay associates of St. Albert’s Oblate parish in Canada (OMI Lacombe) invited the community to drop off food items to be distributed among the poor.  People responded generously, and the trucks of goods are gratefully received. An Oblate associate commented, “People came forward quickly as if they had been waiting for something like this.  I feel like this call to action was as beneficial for those that donated as for those that needed the food.  As we are isolated from each other, a time to see our friends in person, even from a distance, was an unexpected act of charity!” Colombo and Jaffna, our two Provinces in Sri Lanka, also fed the hungry in many ways.  The Fatima Church community in Colombo organized a project of distributing dry-rations to the poor and the affected. Irrespective of their religion, the Oblates provided essential items to 700 families who were in need of help. Among them were Buddhists, Hindus, Muslims, Christians and of course, Catholics. The “Rajabima” community in Anuradhapura also distributed parcels of dry-rations among the poor and needy. The Province of Jaffna economically helped various groups: poor families in the Oblate Parishes, patients at the hospitals, minor staff in Oblate houses, Oblate Lay Associates, and families of some of our seminarians whose livelihood has been affected due to COVID – 19. In South Africa, many OMI parish priests, with enthusiastic support from their parishioners, distributed food parcels and necessary supplies to the poor and those who were cut off from the rest. Unfortunately, established soup kitchens were discontinued in some parishes due to the restrictions on gathering, but alternative means were found to assist people.

After the beginning of the lockdown, OMI Youth in Hong Kong, together with the Oblates, increased the number of food boxes given to the poor on the street.  They are now supporting 250 people each day.

San Leandro Oblate parish in Madrid, Spain, has so far helped 80 families in the neighborhood to cover primary food needs. For this purpose, they launched a campaign to collect donations, and the response was very positive. In the meantime, the community of Pozuelo de Alarcón collaborated with the diocesan Caritas organization in a project for the storage and distribution of food among the needy. More than 1000 lunch packets were distributed daily for 45 days.

In one OMI parish in the Philippines, the Oblates handed over hundreds of seeds and seedlings to households, promoting a backyard garden for a more sustainable food source during the lockdown. In St. Michael’s Parish, Saphan Mai, Thailand, our missionaries organized a regular distribution of food packs every first Wednesday of the month, during these months of COVID-19. How can we also forget Bro. Sebastian JANKOWSKI (Ukraine) and Fr. Vincenzo BORDO (Korea) who have dedicated their life to the service of feeding the hungry long before the coronavirus? This website carried two separate articles on their work i