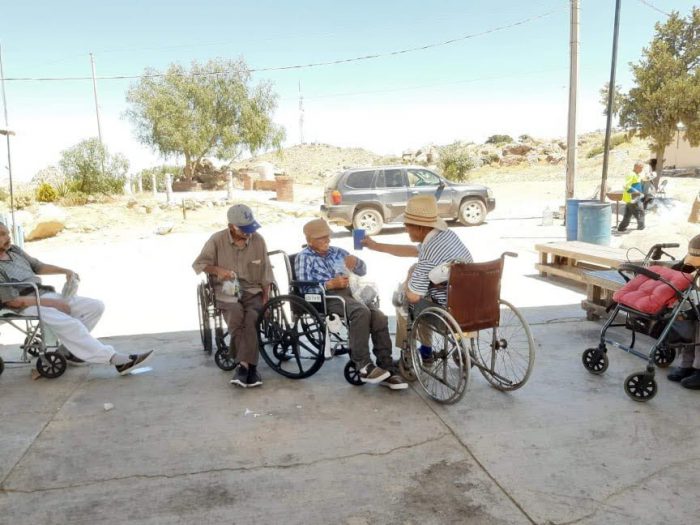 A small group celebrated Father’s Day by visiting a senior care facility where 40 men are housed.  After cleaning, the group presented some small gifts and toiletries, and then shared a meal with them.  The group included some adults from the SEARCH for parents program, which is an offshoot of our SEARCH program focused on youth.  The daughter of one couple listened as plans were made for the trip.  Realizing that there was a significant cost, she contacted her classmates, who had been planning and saving for a graduation party.  Since their graduation party was not going to happen due to the corona virus, they decided to donate the money to this trip.  Another group at the school heard what they were doing and were so moved that they decided to so the same thing.  Oh, how God blesses us. 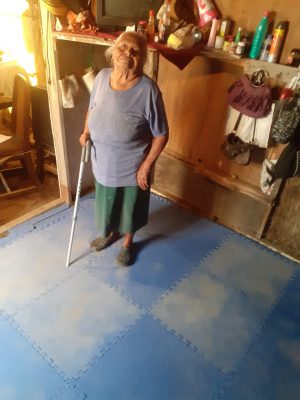 One group that helps here is Tijuana is known as Maximum Impact, so named because every dollar they receive goes toward direct aid. They are able to do this because everything done is voluntary.  One idea they had after visiting Tijuana was to use foam floor tiles to cover a dirt floor instead of concrete.  We tried that idea out this week when we installed a floor for an 89-year-old lady who lives in a makeshift dwelling with dirt floors.  Her house is down over a hillside with a treacherous path, making concrete a real challenge to use.  So, after leveling the floor, we puzzled together the tiles.  While she wanted the tiles all connected into one large square, it would be possible to just do the walking areas.  So maybe we will try that next.

Josefina’s new floor was a nice welcome home gift.  She has been in the hospital and at her son’s for a few months trying to quell a bleeding problem.

We received some wonderful responses to an article we wrote about a woman and her 10-year-old blind son, David.  They live in a cobbled together house made of scraps of plywood and metal with no bathroom and no floor.  We were able to purchase them a gas cook stove to replace their barrel. While we were busy purchasing and delivering a refrigerator, Eduardo, our resident psychologist, had his third session with David.  When the session was over, he and Eduardo played soccer. 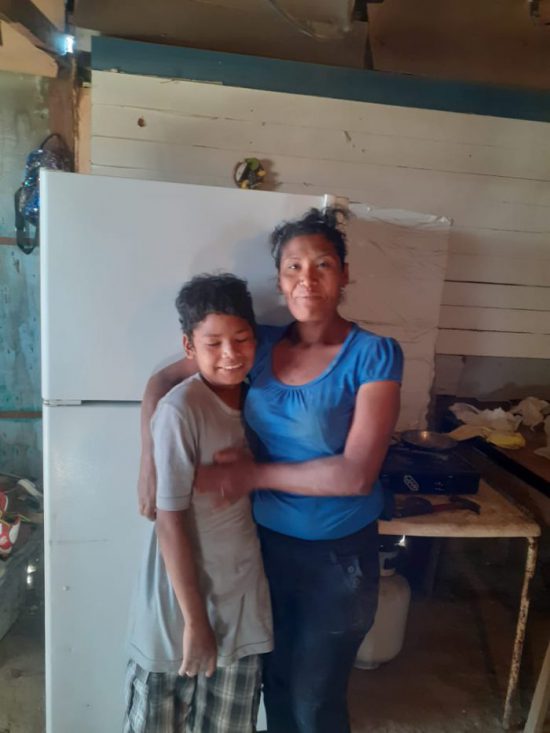 How fun it was to watch Eduardo guard the goal, and David kick the ball between his legs from 3 meters.  Then David would run down the ball, listening for the bouncing and rolling sounds.  The fridge arrived as a nice surprise, and after a bit of door remodeling, we squeaked it in.  The mother sells ice cream by pushing a cart through the streets.  It is possible that the freezer will allow her to make her own product eventually. 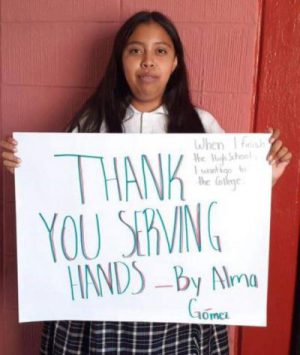 Here is Alma Elizabeth Gomez Bohorquez, who receives a scholarship from Servings Hands International to complete high school.  She is the student mentioned above in the story about donating their graduation party funds to the senior center trip.  Choosing among mathematics, which she is good at, history, which she loves, and psychology, which offers opportunity, she chose psychology to start college.  Inspired by her children attending college, her mother has decided to go back to school at night.  She had discontinued school to help support her family.  The father and mother both work and have sacrificed owning a home and car to help send their children to school.  Her brother is also studying psychology now.  Can you imagine having two children as psychologists?  Would they ever listen to you again?