The following article was published in Oblate World magazine in 2013, and is a reminder that the struggle for racial justice has a long history – and it continues today. 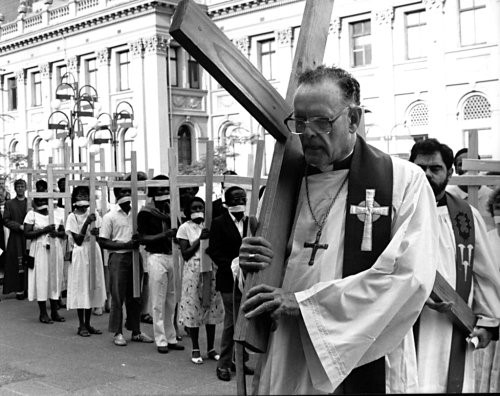 When Archbishop Denis Hurley, O.M.I. was a young boy, he lived for four years on an island off the coast of South Africa.  His dad was the lighthouse keeper.  It was a great place for a boy to spend his childhood.

That island was Robben Island, which would become infamous as the place where Nelson Mandela spent much of his time in prison.  Incredibly, the boy who grew up on Robben Island would play a leading role in freeing Mandel from prison, and freeing the people of South Africa from apartheid.

“I joked with President Mandela that we both had Robben Island experiences, though mine were certainly more pleasant,” said Archbishop Hurley.

The passion to fight against racial injustice didn’t burn in Archbishop Hurley right away.  He enjoyed a typical childhood for a white boy in South Africa where he had almost no interaction with black people.  He even thought Gandhi, a man whom he would later be compared to, was a troublemaker.

Those views however changed when the young seminarian left the country to study for the priesthood.  He took classes with people of different skin colors, and it changed his life.

“Segregation was just an accepted part of the culture in South Africa when I was growing up,” said Archbishop Hurley.  “When I went to Europe I saw how things could and should be.”

After returning to South Africa, Archbishop Hurley quickly rose through the Church hierarchy.  At age 31 he was named the Bishop of Natal, the youngest Catholic bishop in the world.  At age 35 he became the Archbishop of Durban.

As he rose through the Church’s ranks, Archbishop Hurley could not turn a blind eye towards the racial oppression in his country.  He criticized the Catholic Church for not opposing apartheid.  Soon the popular bishop was the most hated Catholic in South Africa. 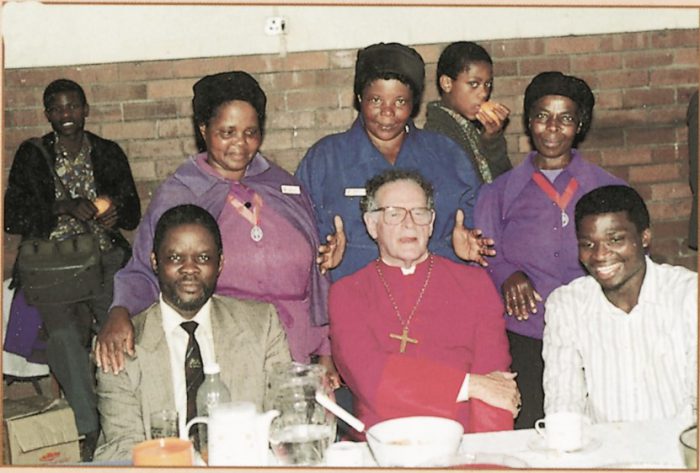 “There was one time people tried to burn my house down, but it was no big deal,” joked Archbishop Hurley.  “They did a real bad job and I put the fire out quickly.”

Repeated death threats and acts of violence against Archbishop Hurley did not cause him to waver in his opposition to apartheid.  He led efforts to desegregate Catholic schools, hospitals and other institutions throughout the country.

Archbishop Hurley didn’t hold back when speaking out against church-going people who wanted to keep a segregated society.  He once referred to Christians who favored apartheid as, “flabby and ineffectual windbags, if not downright supporters of an evil system.”

Those words didn’t sit well with many white South Africans.  But they were making Archbishop Hurley, along with Anglican Archbishop Desmond Tutu, the religious face of opposition to apartheid.  Human rights activists even began to joke: When you’re in a hurly-burly (uproar), there’s no one like the burly Hurley.

“It wasn’t easy to go preach an anti-apartheid message in the white parishes,” said Archbishop Hurley.  ‘But we knew the Church had to come out on the side of these wonderful young people who were showing us that apartheid was wrong.”

During his struggles against apartheid, Archbishop Hurley relied on the support of his brother Oblates who were also at the forefront of ending segregation in South Africa.  The Oblates’ Parish of Regina Mundi in Soweto was the main location for anti-apartheid meetings.  In 1976 police opened fire on protestors outside the church.  As protestors ran inside, the police followed, continuing to shoot at them.

In 1990 Nelson Mandela was released from prison after 27 years.  In 1994 he was elected president of South Africa.  Archbishop Hurley sat just a few feet away from President Mandela as he took the oath of office. 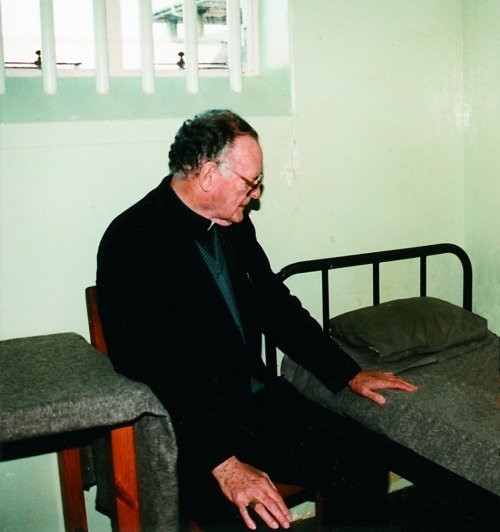 Archbishop Hurley retired in 1992.  Until his death in 2004, the iconic humanitarian spent most of his time working as a simple parish priest at an inner-city church, always remaining close to the poor.  Today, the Dennis Hurley Center in Durban is serving the homeless, drug users, the urban unemployed and refugees with the respect and honor that all deserve as children of one God.

The lighthouse on Robben Island is still standing, but it doesn’t work anymore.  There is no need for its light to shine, to warn people of danger.  Former Robben Island resident, Archbishop Hurley’s physical light has also been extinguished.  But he will always remain a beacon of hope to the poor and oppressed.

In the beginning God said, “Let there be light.”  In South Africa, that light was illuminated by Archbishop Hurley.  And God saw that it was good.