On Thursday, June 25 Oblates had a farewell dinner at Santa Rosa Hall with lay leadership, including Oblate Associates.. The number of people was limited to due Coronavirus restrictions. There were speeches, testimonies, anecdotes and bittersweet, tearful moments giving thanks for 95 years of OMIs at Santa Rosa. 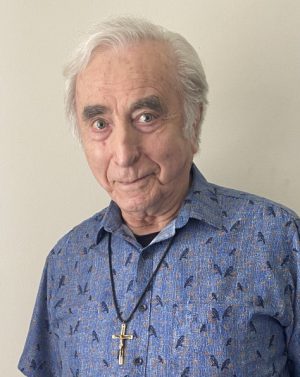 Over nearly a century, there were (and are) lots of Oblates who made a huge difference in the lives of those they served. Perhaps none have touched the lives of so many as Fr. Luis Valbuena, OMI.

A native of León, Spain, Fr. Luis arrived in the U.S. in 1956 and was assigned to Holy Family Parish Wilmington, CA. where he served for a year before being sent to Imperial Valley CA and St Margaret Mary parish. While there he was placed in charge of bracero  (agricultural workers) ministry serving some 7,000 men. After seven years, Fr. Luis asked to preach popular missions and did so, evangelizing from San Diego to Sacramento. 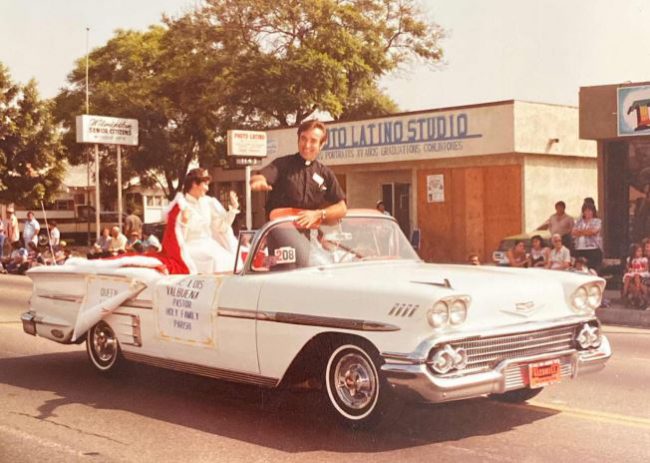 Fr. Luis in a parade when he was Pastor of Holy Family

In 1968, Fr. Luis came to the San Fernando Valley, assigned to Santa Rosa Parish where he quickly made his mark on the hearts of the people in the area. He founded the North Valley Occupational Center, the first such institution to offer bi-lingual adult education classes in the nation. Then-Governor Ronald Reagan came to speak to the first graduating class. He was followed in 1970 by James Lovell, commander of the Apollo 13 space capsule who honored Fr. Luis for his”Distinguished Leadership in Bi-lingual Education.” Since it’s inception, it’s estimated that the center has benefited the development one million individuals. 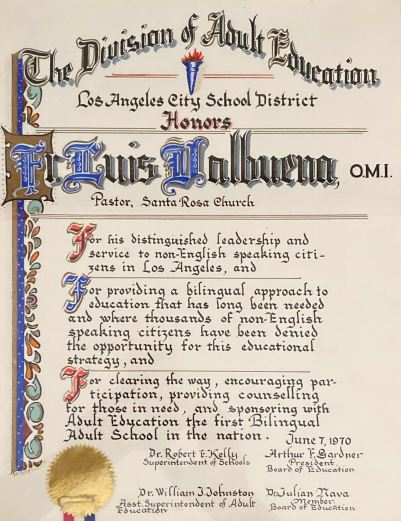 One of many recognitions for his work in Adult education

In addition, Fr. Luis began the Santa Rosa Scholarship Association, a credit union, and served as a hospital chaplain in addition to his duties at the parish. After an earthquake in 1972, Santa Rosa became the local Center for Rescue and Relief. Then-President Richard Nixon recognized the parish and Fr. Luis for their contributions during the emergency.

In 1974 the Oblate General Administration elected Fr Luis to be Councilor for Latin America. During that period he was based in Rome and traveled extensively throughout Latin America.

Also in the 1970s Cardinal Manning asked him to be chairman for Hispanic ministry in the Archdiocese and Fr Luis was able to convince of two policies: 1)  at least one Spanish Mass when 25% of the parish is Hispanic  2) Obligatory for seminarians to study  and become proficient in Spanish.

Fr. Valbuena returned to the San Fernando Valley in 1982 assigned to Mary Immaculate parish in Pacoima. It grew exponentially…from two Spanish masses on Sunday to seven!  He was also able to animate a Farmer’s Market (which continued for 6 years) held in the church parking lot.

In 1988 he was called back to his first U.S. parish: Holy Family in Wilmington, CA where he started another credit union, a scholarship association for the most needy, and Panes y Peces  food pantry for the poor. Padre Luis stayed there  until 1994 when the parish was turned over to the Archdiocese.

He came back to “The Valley” and Mary Immaculate parish in Pacoima. Just in time for the earthquake of 1994  (6.7 on Richter)….just as strong as the 1972 earthquake when he was at Santa Rosa (6.6 on Richter). 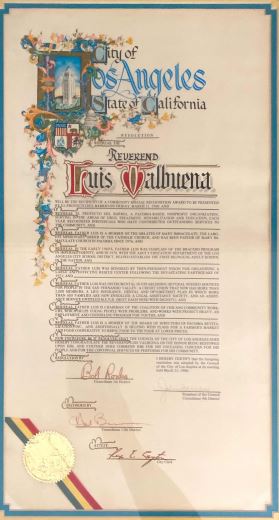 Fr. Valbuena was also honored by the City of L.A.

Later Fr Luis was assigned to Nordhoff where he began TV and Radio ministry. His long-running radio programs have been heard all over north, central and south America for many years. In fact, he will tell you that his media ministry, along with a little bird is responsible for saving his life in 1997.

One morning while working in his office at Mary Immaculate in Pacoima, Fr. Luis was amused to see a small brown sparrow come in through the small gap in an open window. Fr. Luis was especially surprised at the presence of the visitor because just outside his window noisy construction was going on to repair earthquake damage to the church and school. Just as Fr. Luis walked over to let the bird out, three huge steel beams being lifted by a crane broke loose and crashed through his office window, crushing his desk, the computer he was working at, and the chair in which he was sitting. Fr. Luis later told a reporter, “My desk looks like a tortilla. Had that bird not come through I would have been sitting there and I certainly would not be here today.”

The other providential element to the story concerns his radio program. Just before he noticed the bird, Fr. Luis had been on a telephone hook up with his local radio station to record a segment for his weekend radio program. As the engineer was not ready, they asked Fr. Valbuena to “…call back in 20 minutes.” “Had they been ready, I would have been sitting at me desk, on the phone when the beams came through,” says Fr. Luis. His friends say that the bird was “An angel from God.”

Fr. Luis has slowed very little since he dodged those beams, and though he has been battling cancer since 2016, he says, “since my cancer God has become my refuge more than ever.” In spite of health problems the charismatic Fr. Valbuena continues his media ministry in southern California where he is recognized and celebrated wherever he goes by the people he has served and championed for more than 60 years.