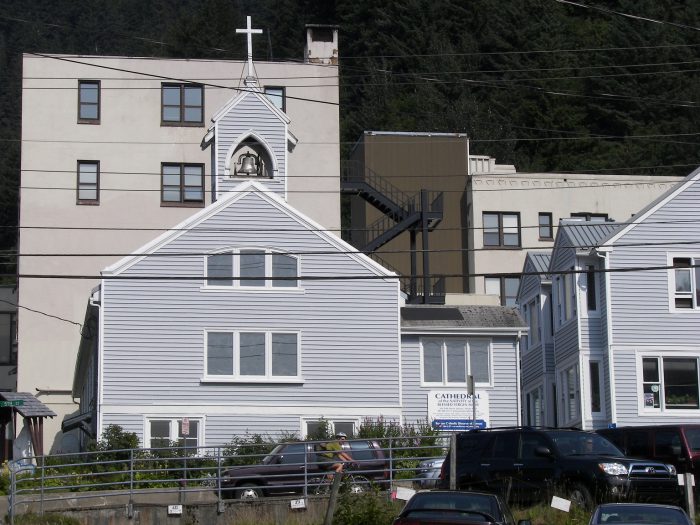 Cathedral of the Nativity of the BVM

Last week in a story about the Oblates leaving St. Gregory Nazianzen Church in Sitka, Alaska, I erroneously reported that this represented the exit of Missionary Oblates from Alaska altogether. That is not the case and I regret and apologize for the error.

In fact the Missionary Oblates continue to be represented in the 49th state by two long-time residents: Archbishop Roger Schweitz, retired Archbishop of the Archdiocese of Anchorage, now serving as Pastor of St. Andrew’s Parish in Eagle River, Alaska,  and Fr. Patrick  Casey, Rector of the Cathedral of the Nativity of the Blessed Virgin Mary in Juneau.

During a telephone interview with Fr. Casey, he pointed out that Missionary Oblates were, and continue to be an important part of the history of the Catholic Church in Alaska. Many Oblates have served in Alaska over the years, Fathers Tom Killeen, Andrew Sensenig, Dwight Hoeberechts, Roger Bergkamp, the late Tony Dummer, and Bro. Craig Bonham to name just a few.

Fr. Dummer spent many years in Alaska and according to Fr. Louis Studer, U.S. Provincial, he was especially beloved, “He loved Alaska and the people were so grateful for his gentle ways and compassionate ministry. Folks often remarked about his down to earth homilies that they could readily apply to living their lives in a better way in service to others.”

Roman Catholics are a minority in Alaska according to Fr. Patrick, nevertheless, many mission opportunities in the great state remain un-filled due to a lack of men in the archdiocese to fill them.

Given the history of Oblates in Alaska, Fr. Patrick feels a special responsibility as one of just two men still sharing the Oblate charism there and his ministry speaks to his vocation.

Writer Dan Branch profiled Fr. Patrick in an article that appeared in the Juneau Diocese’s newspaper, The Inside Passage a few years ago and it sounded like the profile of a Missionary Oblate:  “As he has during his 35 years as a priest, Father Casey quietly does what needs doing for the parish, including maintenance of the church buildings, saying Mass, and carrying the sacraments to the sick and dying at the hospital.”

Happily, the Oblates are still in Alaska and will be for the foreseeable future.