In the extremely poor community in eastern Tijuana, La Antorcha, there was a fire that consumed 6 houses.  The fire occurred in a make-shift neighborhood where approximately 30 migrant families banded together in the last year,

building their houses with shared walls.  The fire was in the morning, and we arrived later in the morning to find the government had already arrived with various services and water.  They had a doctor to check on people, which was good because one man passed out as he tried to reenter the burning buildings.  No one was hurt and he seemed okay.  The community of families had already started a pile of clothing and wood scraps to help the displaced families start over. 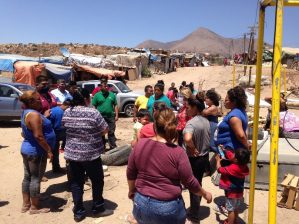 Coincidentally, the La Antorcha community had just this week lost their Oblate church, as the landowner’s son has told the Oblates to move their church.  However, that did not stop that chapel’s social minister from contacting us about the fire and meeting us there to distribute food and blankets.  Asking the families what else they need, they asked for wood to rebuild.  The government, the community, and the Church all coming together to assist rapidly and with different pieces to offer.

We paid a third visit to Vicki, a 62-year-old woman who suffers from morbid obesity.  We had helped with a food basket, some medications, and a visit with a nurse previously.  She told us her feet were so swollen because she had 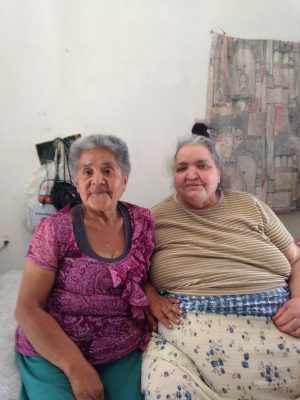 stopped taking her water pill.  She had stopped taking the water pill because it caused her to use too many diapers, and she would run out.  With the assistance of her roommate, Gloria, they had tried to make diapers from flour sacks and cloths.  She disclosed that she gets so distraught over this situation that she has terribly negative thoughts. Vicki has two children (35 and 29), but they do not visit, which adds to Vicki’s feelings of rejection and despair.

Gloria as a teenager had become a drug addict and her life had spun down to the point where she was living under a bridge.  Vicki, 30 years ago, stopped to help her.  She took her to her mother’s, but the mother refused her, saying that her daughter had caused her many troubles, and she wanted nothing to do with her.  Two days later the mother committed suicide.  Vicki took in Gloria, and Gloria has been clean ever since.  Now it is Gloria keeping Vicki alive, cleaning, cooking, changing diapers, etc.

Our new friend David, who is 10 years old and blind, will soon undergo an exploratory eye procedure.  The procedure requires David to be under anesthesia so that he is perfectly still while the doctors probe his eyes.  Maximum Impact, a US non-profit that among other things helps pay for surgeries, is funding the effort to find out if David’s eyesight can be at least partially restored.  Fr Jesse Esqueda, OMI, suggested we ask for your prayers as the procedure is nearing.  Please a take a moment now and pray for God’s intervention. 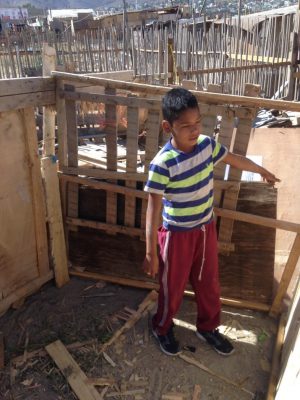 We have enjoyed getting to know David a little more as we make regular visits with our resident psychologist.  He has been blind two years and has had severe difficulties adjusting.  But over the last three visits we observed David building a small chicken house for his rooster.  It does not sound possible, but somehow, he manages to hammer boards together.  The house looks rooster-worthy and rivals others in the neighborhood.

We have done the ultra-sound eye exam, blood test, and corona virus test and finally are ready for the procedure.  Thank you from David and his father and mother for your prayers.