By Susan Klemond, Originally Published by The Catholic Spirit 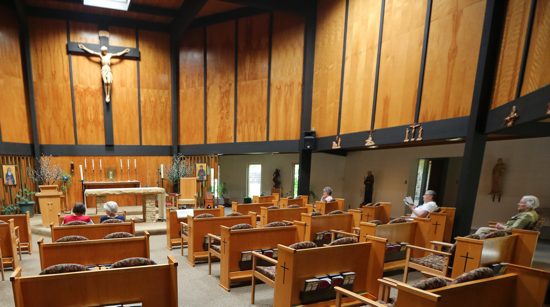 When it seemed likely Gov. Tim Walz would issue the first COVID-19 stay-at-home order in March, social distancing wasn’t a problem at Pacem in Terris retreat center near St. Francis because retreatants are mostly alone while staying in single-occupancy hermitages.

But the center still closed from March 20 to May 18, partly because it couldn’t get needed supplies. The staff took advantage of the time to focus on achieving its mission, said Tim Drake, executive director.

“It’s kind of simplified what we do because it really narrows the focus again on what it was that we did when we first started, which was simply offer a place where people can come and be alone with God,” said Drake, who attends parishes in the Diocese of St. Cloud, where Pacem in Terris is located.

For Pacem in Terris, and four retreat centers in the Archdiocese of St. Paul and Minneapolis, shutting down during what is usually a busy spring season involved some soul searching as they found ways to manage expenses, retain staff and stay in contact with past retreatants. Reopening this summer has brought more challenges in scheduling smaller retreats, rethinking practices, and sanitizing facilities for guest and staff safety.

From the time they closed in mid-March until reopening in June, Christ the King Retreat Center (also known as “King’s House”) in Buffalo and Franciscan Retreats and Spirituality Center in Prior Lake each lost 15 retreats and activities. The Demontreville Jesuit Retreat House in Lake Elmo closed for nine retreat weekends before late May, while Dunrovin Christian Brothers Retreat Center in Marine on St. Croix has lost 30 programs, but reopened in mid-July.