In Mexico, states were first given the right to set their own health policies, including abortion laws, after a 2008 Supreme Court ruling upholding Mexico City’s abortion legislation. In the years that followed, more than half of Mexico’s states enacted laws that banned abortion in either all or most circumstances, while two states allow abortion.

The state of Veracruz enacted a constitutional amendment in 2016 that said life begins at conception. Recently there was a court case regarding Veracruz’s pro-life stance that made its way to the Supreme Court. The Supreme Court just this week upheld the state’s right to hold a pro-life position.

There were a lot of prolife marches held throughout the country, which included people from our parish and also included prolife non-Catholics. Fr. Jesse OMI posted this on Facebook. “The Supreme Court voted against abortion in Veracruz, Mexico. We must continue the work for the wellbeing and dignity of every life, born and unborn. At our
youth center in Tijuana the Oblates provide scholarships for students, food baskets, roofs and housing for the less fortunate, psychological and spiritual assistance for youth and their families, food, clothing, legal aid for immigrants, school for children with special needs, and access to doctors and dentists for those who can’t afford to pay. “Every life is precious, and our commitment is to protect and love every human being from the moment of conception until death.” 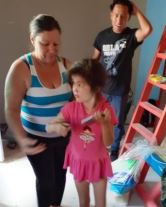 This week we visited two families with disabled children. The first is a 10-year-old girl, Esmeralda, who has severely limited movements and speech. She can say a few basic words like hungry, drink, and sleep. Through therapy she has learned to walk somewhat. She loves looking at activities on her mom’s cell phone, watching TV, and listening to music. Recently, the father was listening to some sad love songs, and she began to cry. Her parents were surprised to realize that she was able to understand enough to understand this was about a sad situation.

While visiting, she sat next to one of us and took his hand and placed it on her back. The mother and another one of us were having a long talk but were noticing this. He rubbed her back for a second then removed his hand. She quickly returned his hand, so he scratched her back a little. Each time he would remove his hand, she would return it for more. Her mother explained she loves hugs and kisses and attention.

The father has a 4-year degree and had a great job in a factory until corona virus shut it down. Since it has not reopened yet, he has had to work in another factory as a common laborer at night. 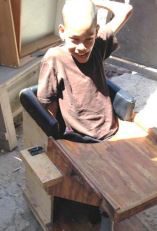 Gabriel in the chair his father made for him

The other family has a 12-year-old son, Gabriel, who has a disease that keeps him wheelchair bound. Having visited several times, bringing food, diapers, medicines, and blankets, we asked if he is always so happy. His parents said yes. When one addresses him, he lights up and becomes more animated, even though he cannot speak. For the first 6 years of his life he was virtually in a vegetable state, but the parents kept pursuing therapy. Then at age 6 he turned a corner and was able to use the bathroom and to feed himself. He can now manipulate a tablet, enjoying the sights and sounds. He can read a little and knows his numbers. His father, a carpenter, built him a special wooden wheelchair that has a work surface and gives him a place to rest his feet off the floor. The parents say he has been a blessing in that they have a closer relationship, united in their efforts to give their son the best life possible. They asked if we could help get him some sort of chair, like that of a walker for babies, where he could move himself.

Our featured student is Ana Maria Ibarra Avitia. She is a 26-yearold single mother of two, who has just been given

the opportunity to study nursing, having just completed high school. Since one child has Asperger Syndrome with attention deficit and hyperactivity disorder, she hopes that nursing will help her understand him better. She says that working since she was 13 was necessary to continue her education. Her son’s medical treatments are expensive so receiving a scholarship makes studying nursing a dream come true.

(David Rizo and Rich Reader are two of the leaders of the Tijuana Youth group affiliated with the Oblate Mission in Baja which is coordinated by Fr. Jesse Esqueda, OMI)