Corona Virus has made everything so abnormal that any return to normalcy is a blessing. Saturday, our parish celebrated its first semi-normal mass. The leaders from the different chapels were invited to participate forming the largest mass we have had since the pandemic. Fr. Lucio Castillo, OMI rang the bells long and strong signaling the welcome to this special mass. He announced that starting Sunday, we will have masses in almost all the chapels again for the first time in five months.

That same Saturday Fr. Jesse Esqueda, OMI celebrated a special mass for the 38 graduates of the San Eugenio Scholarship program. Since schools were shut down, all students have had to complete their assignments online to graduate; a further exercise in self-discipline. Many parents and friends were in attendance to recognize their achievement.
About half were graduating from a pre-college level and the other half were graduating from college. At the end of the mass each graduate was called forward and a special blessing was administered. Some of the students took the
opportunity to say a few words.

Dylan Gonzales: ¨I would love to have had a graduation party, but since we couldn’t, I am really happy and thankful for this mass. I want to take this opportunity to publicly tell my family how appreciative I am for everything you have done for me while I was studying to be an engineer. I finally did it. Thank you so much.¨

(Dylan graduated in nanotechnology, which deals with the manipulation of atoms at less than 100 nanometers. This science is how we have managed to miniaturize things to the point of having billions of bits of data in a small chip. Dylan has been in SEARCH many years and finally worked his way up to where he led one of the last retreats before the pandemic.)

Mildred Juarez: ¨I just want to thank everyone that is been part of my life for these four years. Thanks to your support and help, today I am a psychologist. Thanks to the scholarship program and the donors that the Oblates have, we have gotten to see our dream to become professionals come true¨.

(Mildred has long served the church teaching catechism, focusing on the young teens. She already is applying her accomplished psychologist skills in the church program.)

After mass Jose, one of our youth, set up a cap and gown photo opportunity that looked very professional. It was a nice touch as just two cap and gown outfits were rotated to create these lifetime memories. Alejandra (shown left), who with Adriana, administrates the scholarship program was also one of the graduates. She completed her degree to be a math teacher. 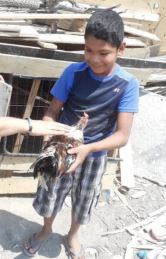 We took our little friend, David, for exploratory eye surgery 2 weeks ago. After a lot of work looking for funds, taking him to pre-op medical appointments, a blood test, a corona virus test, the doctors said, unfortunately, there is nothing they can do for him. We were greatly saddened to hear that, since this is the best eye clinic in Tijuana. The doctor said that the problem was exasperated a few years ago, when the mom had a drug problem. David was malnourished and contracted tuberculosis. The doctor knew the story of the family and asked us to keep helping
David, because while he does not believe in God, he believes it is the best way to help David endure this.

At the youth center we are already working on how to help, and everyone is doing their part. Adriana, who oversees the migrant program, is looking for someone to teach him to play an instrument, since he really wants to learn and loves music. Alejandra, our friend that works in the scholarship program, is arranging for a university student, who is also blind, to teach him braille. The hardest part was for our resident psychologist, Eduardo, to give David the sad news. When David heard the news, he was strong and understood the situation. He did not want to talk about it a lot,
but Eduardo said that we must give him time to process all the information.

After the session with Eduardo, we were playing with David and his rooster and hen. He said that is what makes him happier than anything.