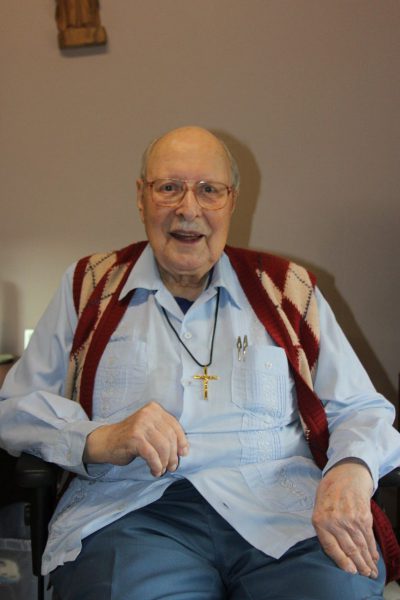 For Bro. Gus Cote, O.M.I. life as a Missionary Oblate has been magical.

Brother Gus is an amateur magician who spent years using slight of hands to explain the Catholic faith to thousands of children.

“I still run in to people who say they remember attending one of my magic shows when they were a kid,” said Bro. Gus, age 89.  “But more importantly they remember the message behind the magic.”

Brother Gus admits that he has been a trickster ever since he was a boy growing up in Lowell, Massachusetts.  He was practically born into the Oblate parish of St. Jean Baptiste where in grade school he began serving Mass and even answered the door as an unofficial receptionist at the parish office.

“I have been working for the Oblates my entire life and I’m still waiting for my first paycheck,” jokes Bro. Gus.

The Cote family was very active in the parish.  Dad was President of the Holy Name Society and mom was a member of the Ladies of St. Anne Sodality.  The family faced financial hardships and for two years Bro. Gus lived in an orphanage.  In the eighth grade, he entered the Oblates’ minor seminary and took his vows as an Oblate brother in 1956.

Brother Gus spent most of his ministries working in Oblate retreat houses, taking care of maintenance issues as well as helping out with a variety of retreats and spiritual programs.  It was at the retreat houses that Bro. Gus started doing magic shows for young people.

At first the magic shows were pretty simple, a couple of card tricks and illusions.  Over time it grew into a more professional act with props and even a disappearing rabbit.  As word of Bro. Gus’ magic shows spread, pastors at parishes began to call him to perform at their churches.

“God is full of surprises and that was the overall message that I wanted the kids to learn through my magic shows,” said Bro. Gus.

When Bro. Gus got older, physical limitations made it harder for him to perform his tricks.  He retired his magic act and began making magic in the lives of the very poor in Haiti and other Latin American countries.  For about 15 years, Bro. Gus coordinated the Oblates’ Mission Office in Lowell where he corresponded with Oblates in the mission fields and helped them with raising money and obtaining goods that were then shipped overseas to help the poorest of the poor.

Today Bro. Gus lives at the Oblate Residence in Tewksbury, Massachusetts for elder and infirmed Oblates.  His mobility is limited, but he still is able to minister primarily through the power of prayer. 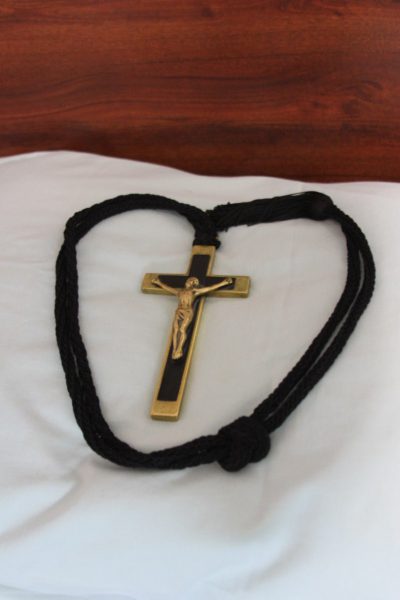 Every morning when Bro. Gus makes his bed, he places his Oblate Cross on his pillow, a ritual that he began more than 60 years ago.  To some people Bro. Gus’ cross might appear to be less impressive, but not to him.

When Bro. Gus received his cross, brothers received smaller crosses than priests.  When that practice ended, Bro. Gus was offered a full-size Oblate Cross.  But he declined the offer, having grown too attached to his smaller cross.

Brother Gus places his cross in the middle of his pillow and then uses the cord to form a heart around the crucifix.  It’s a simple way for him to display his faith and his Oblate brotherhood, and there is nothing tricky about it.