By Seamús Finn, OMI originally Published in the September 2020 Newsletter of the U.S. Catholic Mission Association

In instituting the Dicastery for Promoting Integral Human Development in 2016, Pope Francis stated that in all her being and actions, the Church is called to promote the integral development of the human person in the light of the Gospel.

“in all her being and actions, the Church is called to promote the integral development of the human person in the light of the Gospel.”

In the encyclical Laudato Sí he would recognize that the “care of our common home” is an essential component of that mission. The creation of this dicastery under a new banner reflected the message of the Gospels, the practice of the tradition and Catholic Social Teaching, both of which are all deeply rooted in the two great commandments proclaimed by Christ himself. As the missionary works to bring the light of the Gospel to bear on the multifaceted challenges and issues that emerge in each missionary situation, the resources of this dicastery are invaluable.

In 1986, the United States Conference of Catholic Bishops issued “Economic Justice for All: Pastoral Letter on Catholic Social Teaching and the U.S. Economy.” In it, they proposed three questions that can still be used to guide any reflection on mission, economic justice, and the economy whether domestically or globally. What does the economy do for people? What does it do to people? And how do people participate in it? In the 21st century, it has become essential to add a fourth question, one that addresses the impact of the economy and economic activity on the planet.

Economies are human constructs that enable people to cooperate for the benefit of their own survival and for the development of and care for all of God’s creation. Each local and sovereign economy operates within a global financial system that exerts tremendous influence on the material well-being of people across communities everywhere and on the health and sustainability of the planet. Reflection and analysis of the structure and operating rules of each economic system, at all levels – if they are truly to serve the common good and the needs of all humanity – must be an integral part of any missionary analysis and planning that seeks to promote and sustain integral development.

mandates on love of neighbor and how well they emulate the justice and compassion of God. This work of evaluation and recommendation will remain essential as the global interconnectedness of financial markets continues to deepen and exert its influence on the price, supply and demand of goods and services, down to the local and regional marketplaces.

Since the Second Vatican Council when the Church’s appreciation of research and analysis of the developing social sciences increased, there has been a consistent call for a greater integration of the social and religious missionary activities of the Church in a way that strengthens both the spiritual and material wellbeing of believers. This is exemplified in the improved coordination between the work of relief and development projects and local religious leaders, such as in fields of education, health care and agriculture, to equip members and students with the skills and training required to promote integral sustainable development and to function and prosper in today’s world.

Finally, the publication of the encyclical, Laudato Sí, in 2015, has awakened a new consciousness around the world about the interdependence of human survival and the health of the planet. This has expanded the horizon of reflection for today’s missionaries and introduced a new set of questions about the relationship between mission and economy. These range from the macro questions about cosmology and the origin stories reflected in religious traditions and in different cultures and narratives, to more basic questions about the real values of land and forests, waterways and air quality, as well as revisiting accepted customs and practices on agriculture, foods, nutrition, and biodiversity.

Pope Francis refers to the Earth as “our common home” that we share with all other species of plants and animals and upon which we depend for our survival as a species. How we integrate that perspective into the creation stories that we proclaim will eventually inform how these elements re values in planning for land or agriculture or infrastructure or building and will have long-term impacts on health, well-being and prosperity of communities.

Throughout his pontificate Pope Francis has also raised the broader question about the adequacy of the practices and principles of the dominant economic system for a sustainable future and whether it is fit for the purpose extending the goal of inclusive integral development across all regions. 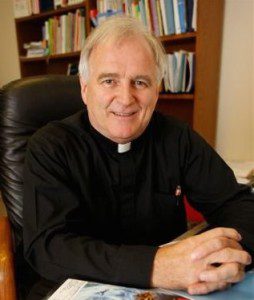 The scope and scale of the issues raised in Laudato Sí and in this blog call for a multidisciplinary approach that
the New Dicastery must equipped to embrace, whether in debating policy at the global and multilateral level or in searching with missionaries and leaders of all faiths for innovative answers at the regional level or in supportive planning for projects in local communities.

Rev. Séamus Finn, OMI has directed the US Oblate JPIC Office since its inception and has been active in JPIC ministry at various levels for over 25 years. He represents the Missionary Oblates on the boards of directors of a number of organizations supported by the Oblates both in the U.S. and internationally. He is a leader in faith-based socially responsible investing, and is active with the Interfaith Center on Corporate Responsibility. Séamus served in parish ministry in Brattleboro VT, Puerto Rico, Miami Fl and Lowell MA.