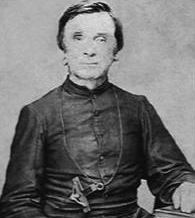 An important early missionary in the history of the Church of Texas is Fr. Pierre Yves Kéralum of the Missionary Oblates of Mary Immaculate.  Born in France on March 2, 1817, he entered the seminary at the age of 30 and was sent to Texas, along with 6 other young Oblate missionaries, immediately after being ordained a priest in 1852 by the founder of the Oblates, St. Eugene de Mazenod, OMI. The first Bishop of Texas, Msgr. Jean Odin, remarked to the Oblate superior: “The first time I met your Fr. Kéralum, I took a liking to him:  he is so good, so candid and above all so respectful, that one cannot help but love him with a singular affection.” Everyone who met him had the same response. His fellow priests and visiting bishops spoke of him with reverence, while the Mexican people he served called him “el Santo Padre Pedrito.” His skills acquired as a carpenter before he became a priest were put to use in the construction of what today is the cathedral church and other church buildings in Brownsville and Roma. He was called upon to assist with building what is now the cathedral church in Laredo. But in his own lifetime he was most renowned for his religious life of humble faith and exemplary charity especially to the poor and most abandoned in the missions of the Rio Grande Valley in South Texas which today is in the Diocese of Brownsville.

Assigned the most difficult territory of the brush country farthest from the Rio Grande, Father Kéralum spent most of his life on horseback visiting the scattered ranches.  He lived a life of great trust in divine providence and religious poverty which was outstanding in its simplicity in his wearing old worn-out cassocks and he would often spend the night sleeping under the stars. He would spend weeks at a time celebrating Mass and other sacraments, catechizing, praying with the sick, burying the dead and bringing consolation to poor families.

His mysterious disappearance and death in 1872 caused great sorrow in the community.  The trails in the brush country were often narrow, and Fr. Kéralum’s eyesight had worsened over the last few years. He began to become lost for days until finally finding a settlement. His superior. was all too aware of this, but had no one to take his place. Ever devoted to the people, Fr. Kéralum was last seen on November 12th as he left the ranch of “Tampacuas” near present-day Mercedes, Texas. Searches were made for him without any success.  It was not until ten years later, in November 1882, that some cowboys looking for lost cattle came upon a saddle hanging in a tree in the thick brush. The remains of Fr. Kéralum, known as the “Lost Missionary,” were found below the tree, 8 teeth, some bones, a chalice, paten, a box for altar bread, an altar stone, Oblate cross, a water bottle, pieces of a rosary, an altar bell, a watch and 18 dollars in silver. It was at this precise time that the final decision was being made whether to continue the Oblates’ mission in South Texas that for several years had been slated for termination. The discovery of these relics was immediately taken as a divine confirmation of the decision to remain. Fr. Kéralum lived to the maximum the prayerful wish of St. Eugene for his Oblates, “They must wholly renounce themselves, striving solely for the glory of God, the good of the church and the growth and salvation of souls.” 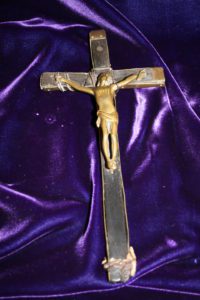 Fr. “Pedrito” Kéralum continues to be revered as a model of saintly, indeed heroic virtue, and of selfless dedication to those seeking the blessing of God in their lives. The Oblates of Mary Immaculate, supported by Bishop Daniel Flores of the Diocese of Brownsville, are prayerfully promoting his causes to be declared a saint by our catholic church. The faithful are encouraged to pray to our Heavenly Father through the intercession of Padre Pedrito to grant the special favors of strength, healing, and consolation that they seek. It will be most appreciated if those receiving special miraculous favors would make them known to Fr. Roy Snipes, OMI,  Our Lady of Guadalupe Parish, Mission, Texas olgparish@sbcglobal.net or (956) 585-2623.

(Thanks to Fr. Louis Studer, OMI for sending this article)