By Fr. Ali Nnaemeka, OMI, originally published on the website of OMIUSA JPIC

“The oblates are not left behind in this battle for social justice in Nigeria. Many of our brothers who are on social media have been seriously engaged in this protest on their Twitter, LinkedIn, Instagram, Blogs, Facebook, etc., handle.” 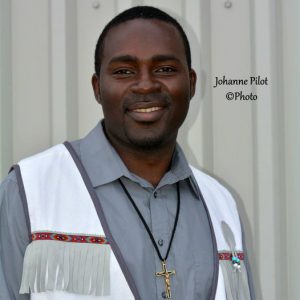 The movement started in 2017. It was when Amnesty International accused the SARS of regularly detaining young Nigerians, brutalizing them, extracting money from their relatives, and even of committing extrajudicial killings. In the same year, a petition signed by 10,195 people was submitted to Nigerian National Assembly demanding a total disbanding of the squad. The motion was swept under the carpet by the house of Assembly. Then some cities organized random protestations, but it was suppressed as it could not rally many partisans. It then went online giving birth to the acronym #EndSARS.
And in 2019, a committee, commissioned by the presidency to verify the accusations leveled against SARS came up with some recommendations that never had a follow-up. It was added to the myriads of commission reports sleeping in Nigerian government’s cupboard.
However, on the 3rd of October 2020, a video of the infamous SARS killing a young Nigerian, and taking his car went viral. It was the straw that broke the camel’s back. Then, infuriated young Nigerians took to the street to urge the government to dismantle, for real, the SARS corps. In the few days that followed, testimonies of police brutality and extrajudicial killings started pouring in from all the nooks and crannies of the federation. Different cities started organizing their protest, demanding an end to SARS and all forms of police brutalities.
Forced by the protesters, the government dismantled SARS, but a few days later, they changed its name and came up with another group called SWAT (Special Weapon and Tactical team). And within these times that the protest was going on in the streets of Nigeria, Europe and North America, millions of other Nigerians engaged the government online. In a few days, Twitter created a logo for the online protest that is being championed by some Nigerian women online. The particularity of this protest and maybe the reason why it is bearing some fruits is that it is being steered by women both online and in the streets.
The oblates are not left behind in this battle for social justice in Nigeria. Many of our brothers who are on social media have been seriously engaged in this protest on their Twitter, LinkedIn, Instagram, Blogs, Facebook, etc., handle. Even the Catholic Bishop Conference of Nigeria, a few days back, issued a statement supporting the youths in their quest for a better Nigeria.
Unfortunately, the situation seems to be degenerating with some politicians sponsoring mobsters to create panic and destroy properties. The oblates in Jos are now fearing as the manifestation has taken a new phase with some sponsored youth claiming that the protest is a Christian initiative to overthrow the President who is a Muslim. In a message we just received from one of our oblate priests, Fr Tebéné Patizéré Jacques, we can read: “at Jos, the #EndSARS protest is slowly turning into an interreligious conflict. Some Muslim youths are claiming that the Christians are plotting to overthrow the President. The city is now in turmoil.”
Please, keep Nigeria, Nigerians, and the Oblates in Nigeria in your prayers.
Nnaemeka Ali Omi
Africa Faith & Justice Network
Read more about the #EndSARS protests:
New York Times: https://www.nytimes.com/…/nigeria-protests-police-sars…
BBC World News: https://www.bbc.com/news/world-africa-54633337
Wikipedia: https://en.m.wikipedia.org/wiki/End_SARS
Tweet