Thanks to Fr. Kevin Collins, OMI for making us aware of this article 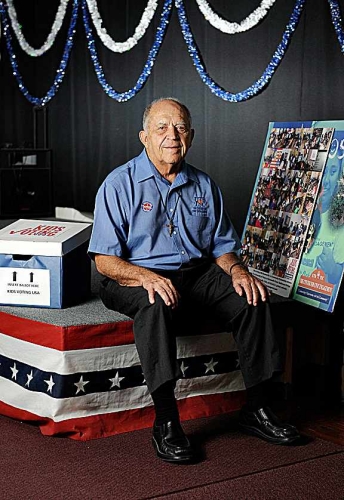 Father Armand Matthew sits for a portrait on Monday, October 19, 2010 in Brownsville, TX. Having helped start the Center for Civic Engagement at the University of Texas at Brownsville and Texas Southmost College, Matthew also worked to encourage civic participation through the Kids Voting non-profit since 2004. He passed away at age 90.
Paul Chouy / The Brownsville Herald

Even though the COVID-19 pandemic forced everything online, voting continues through Friday in the 2020 Kids Voting Brownsville Mock Election that is part of a civic engagement partnership among Brownsville ISDschools,theUniversity of Texas Rio Grande Valley and the city of Brownsville.

The election is taking place alongside the Nov. 3 general election just like it has for years, with the aim of encouraging discussion of candidates and issues in the runup to Election Day among students, their friends and families. The overriding goal is to create an informed electorate and instill lifelong voting habits among Brownsville citizens.

That was the vision of the late Father Armand Matthew of the Oblates of Mary Immaculate, who led numerous initiatives to heighten people’s awareness of the importance of voting and founded the Center for Civic Engagement at the University of Texas at Brownsville, one of UTRGV’s legacy institutions.

Cindy Valdez, UTRGV associate vice president for college access and K-12 partnerships, said despite the pandemic and its problems there was never any thought of not having Kid Voting during what is generally agreed to be the most consequential election in generations.

“Just the fact the students are voting at school connects them to what’s going on and they see themselves as part of that process. They know the candidates and show up to vote,” she said.