Thanks to Fr. James Allen, OMI and Mike Viola for this article 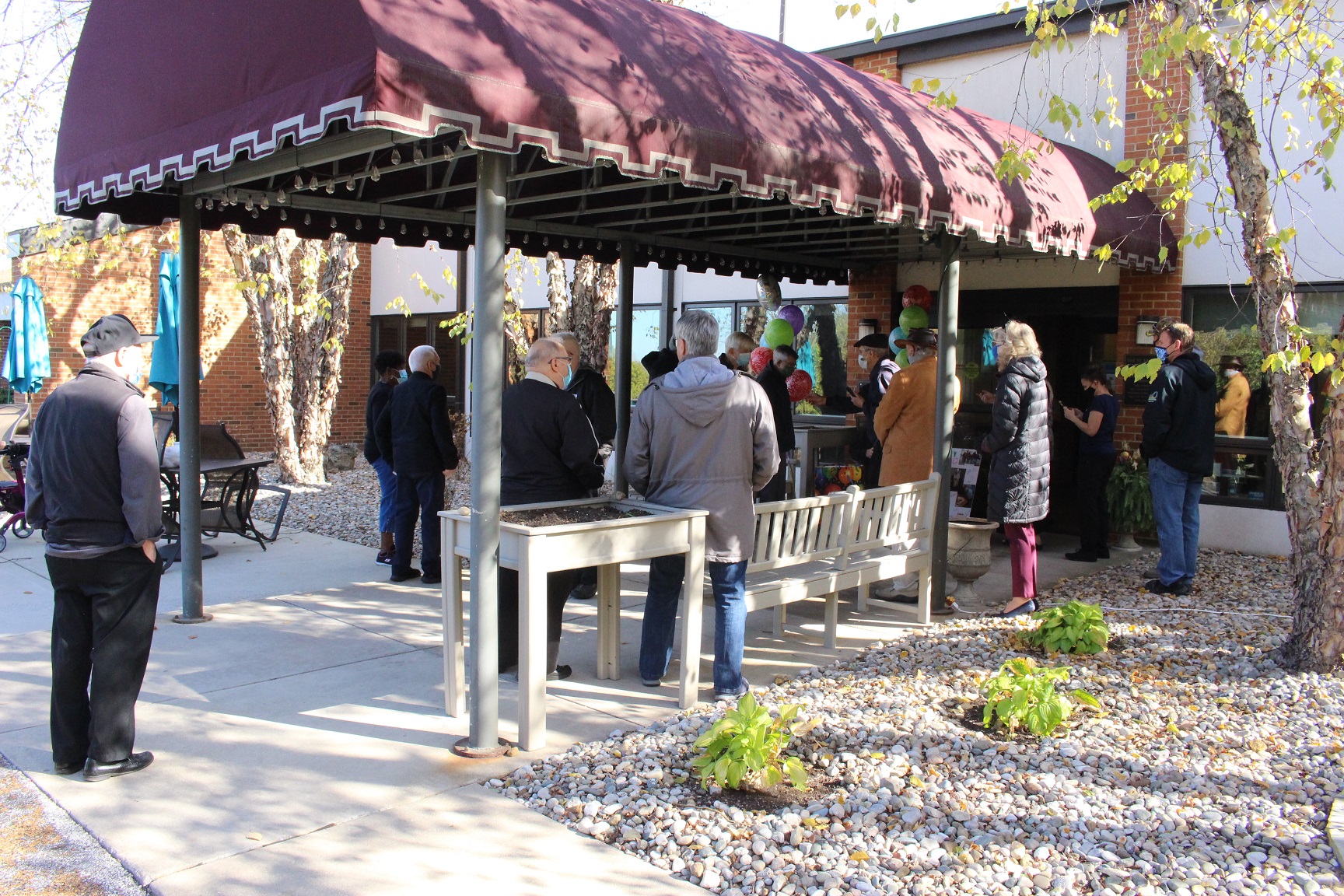 It’s a once-in-a-century celebration at the entrance to the St. Francis Center in honor of Fr. Clarence Zachman, OMI

On November 2, 2020, Fr. Clarence Zachman, OMI, celebrated his 100th birthday. The senior Oblate in the US Province also became the youngest member of the 6-member club of centenarians among the worldwide Oblates of Mary Immaculate. The oldest is 103-year-old Canadian, Fr. Philippe Mongrain.

Born on a snowy day to devout Catholic parents in a rural community of Rogers, Minnesota, he shared family life with 3 brothers and 3 sisters. One of his younger brothers, Francis, also became an Oblate while 3 of his sisters joined the School Sisters of St. Francis in Milwaukee. Two of them are still living, Sister Cecilia and Sister Rosalia.

He attributes his own religious vocation to an encounter he had with Jesus at the time of his First Communion. Told by the nuns that Jesus would grant anything they asked for on the occasion of their First Communion, young Clarence simply asked Jesus “What do you want of me when I get big?” And Clarence is certain that there and then Jesus told him to become a priest. With the help of Jesus, he did exactly that. After high school, he entered the Oblates’ minor seminary in Belleville, IL. After his novitiate and first vows (1943), he was sent to Ottawa, Canada, for his philosophy and theology studies. He was ordained to the priesthood in 1948.

His first assignment was at the recently opened Oblate minor seminary, Our Lady of the Ozarks, in Carthage, MO, where he taught typing and religion and served as treasurer until 1961. In those years, besides keeping the books and keeping the seminarians and staff well fed, he often had to serve as chief maintenance person, picking up skills as plumber, electrician, groundskeeper, and general handyman. 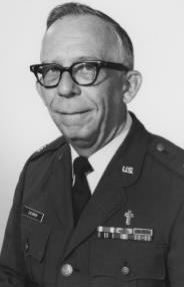 Fr. Zachman in the Air Force

His life took a totally different turn in 1961 when he joined the United States Air Force as a military chaplain, and for the next 20 years was stationed in countries all over the world. “As Oblates we are called to serve the poorest of the poor,” said Fr. Clarence. “As an Air Force chaplain, I met many people who needed help, especially during wartime. I was honored to serve people serving our country.”

After his retirement from the Air Force in 1981, he had a couple of brief stints in parish work in South Dakota and Minnesota before coming to the National Shrine of Our Lady of the Snows in Belleville, IL, where he served as chaplain at the Apartment Community retirement center. When he moved on from that ministry, he spent many years with the pilgrimage staff at the Shrine, commuting there daily from St. Henry’s Oblate Residence a few miles away.

“I helped out wherever I was needed. I would tell the pilgrims that God wants me to give them a message – that God loves you. That is the Good News. Eventually I developed the habit of telling people a simple message, ‘God loves you and so do I.’ I’m sure I’ve repeated this phrase tens of thousands of times. It’s such a simple but vitally important message to be reminded of.”

In January 2020, Fr. Clarence moved back to the Shrine where he now resides at the St. Francis Assisted Living Center, a section of the Esquiline Retirement Community.

Unfortunately, the restrictions imposed by the Covid-19 pandemic upset any plans for a big birthday celebration for the centenarian. Some of his friends and relatives had hoped to travel to Belleville for the day, but they would not have been able to greet him face to face.

Nevertheless, the local Oblates and Esquiline Activities Coordinator Kim Parker were not going to let this momentous occasion go without some kind of celebration. So, on the morning of November 2nd, local Oblates and some employees gathered around the entrance to the St. Francis Center with gifts and a large home-made card signed by all the Oblates. Ms. Parker brought the guest of honor out to greet the well-wishers and a “mini-party” took place in a safe, socially-distanced outdoor environment!

The delighted Fr. Clarence held court with his brother Oblates and other well-wishers thanking them for the gifts and their presence on his special day.

Two years ago, on the occasion of his 70th anniversary of priesthood, he stated: “What keeps me young is that I am always looking to improve my personal relationship with God. God has always had a plan for me. And I know that He will continue to have a plan for me for as long as I live. Its simple, just let God be God, because God is love. I am always being reminded of His love. God has taken care of me every single day, and He will do so for every day to come.” 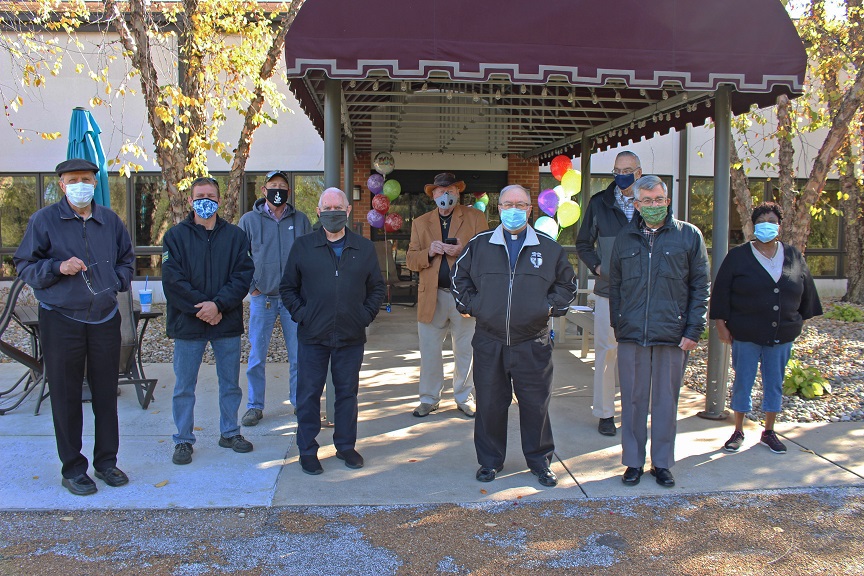 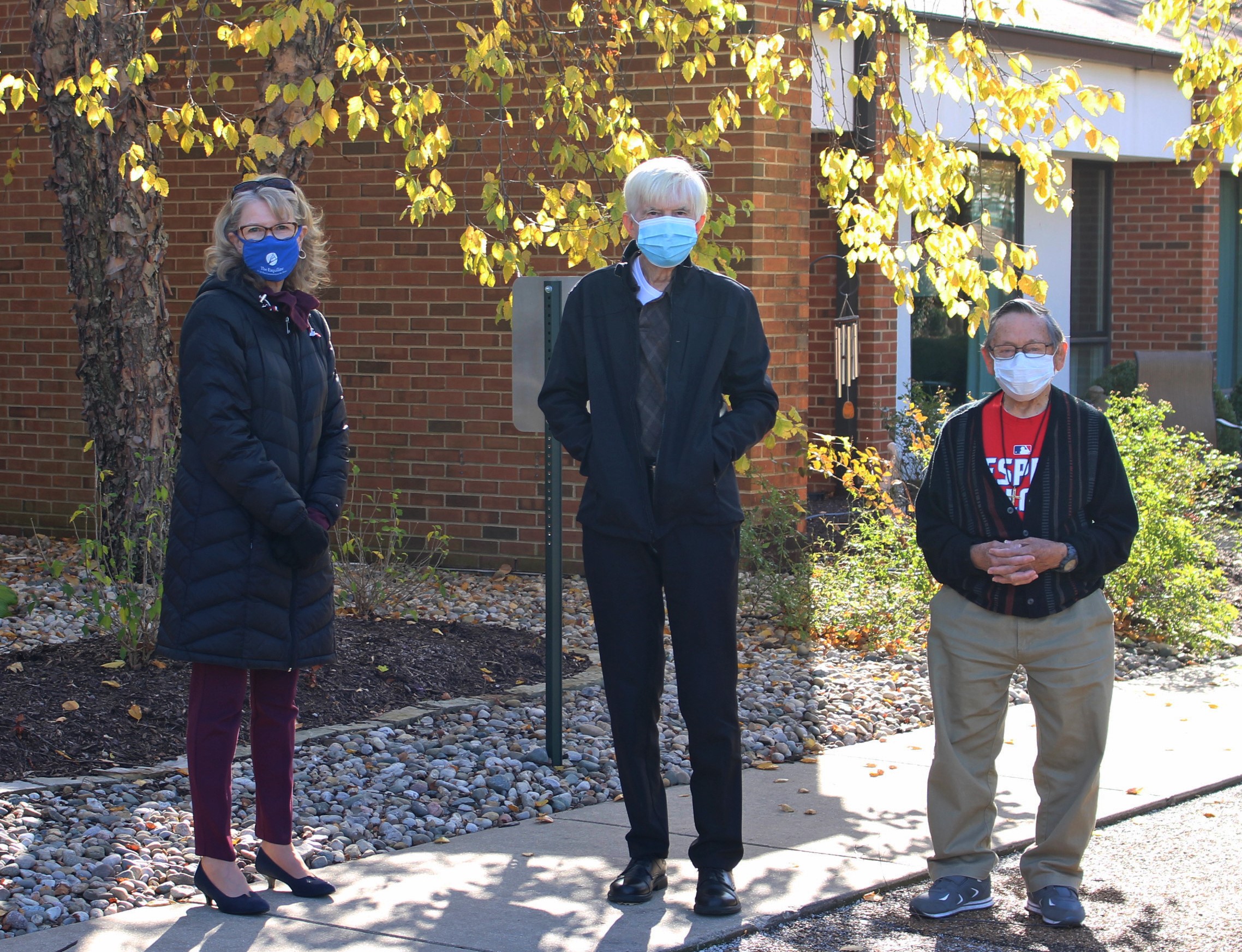 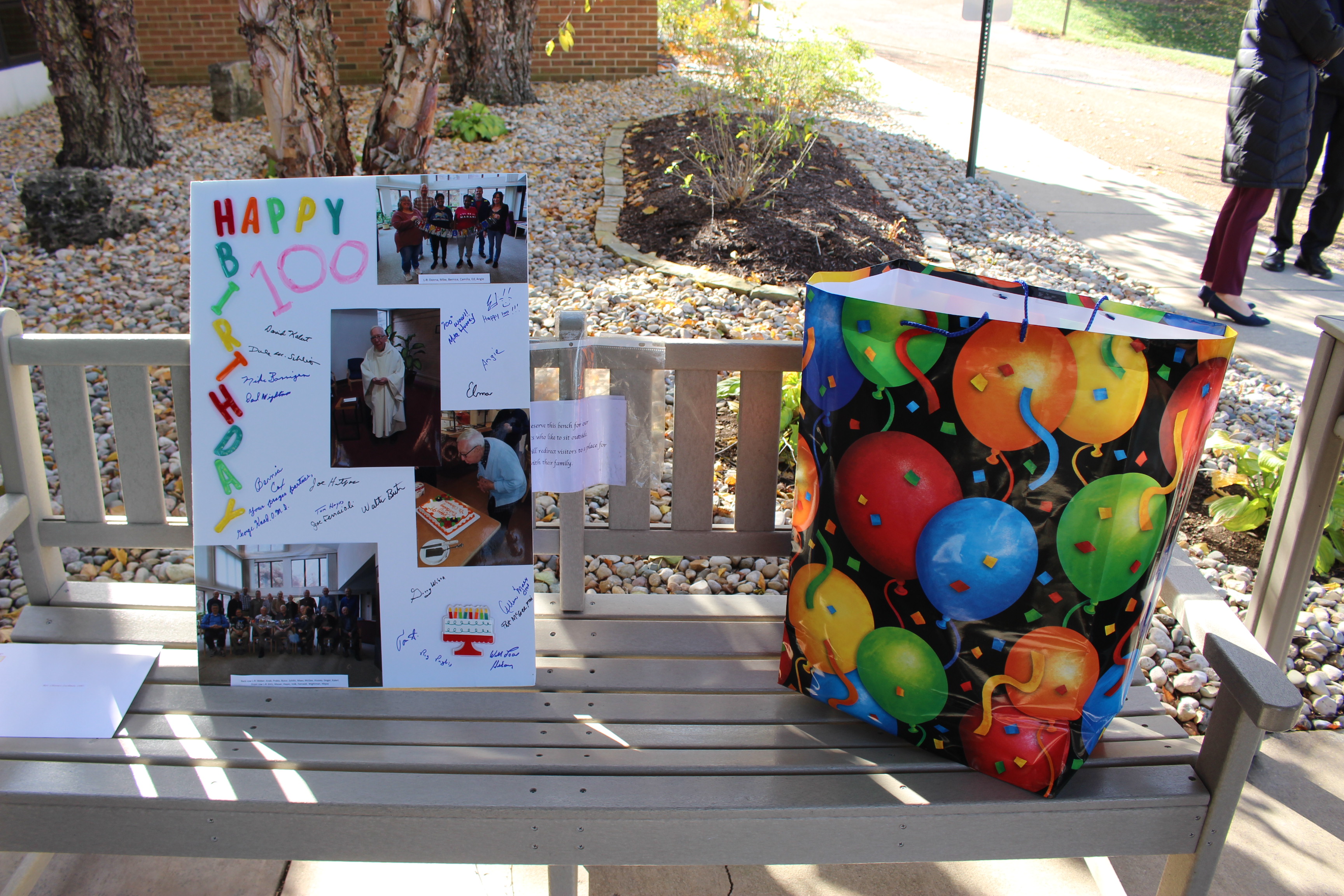 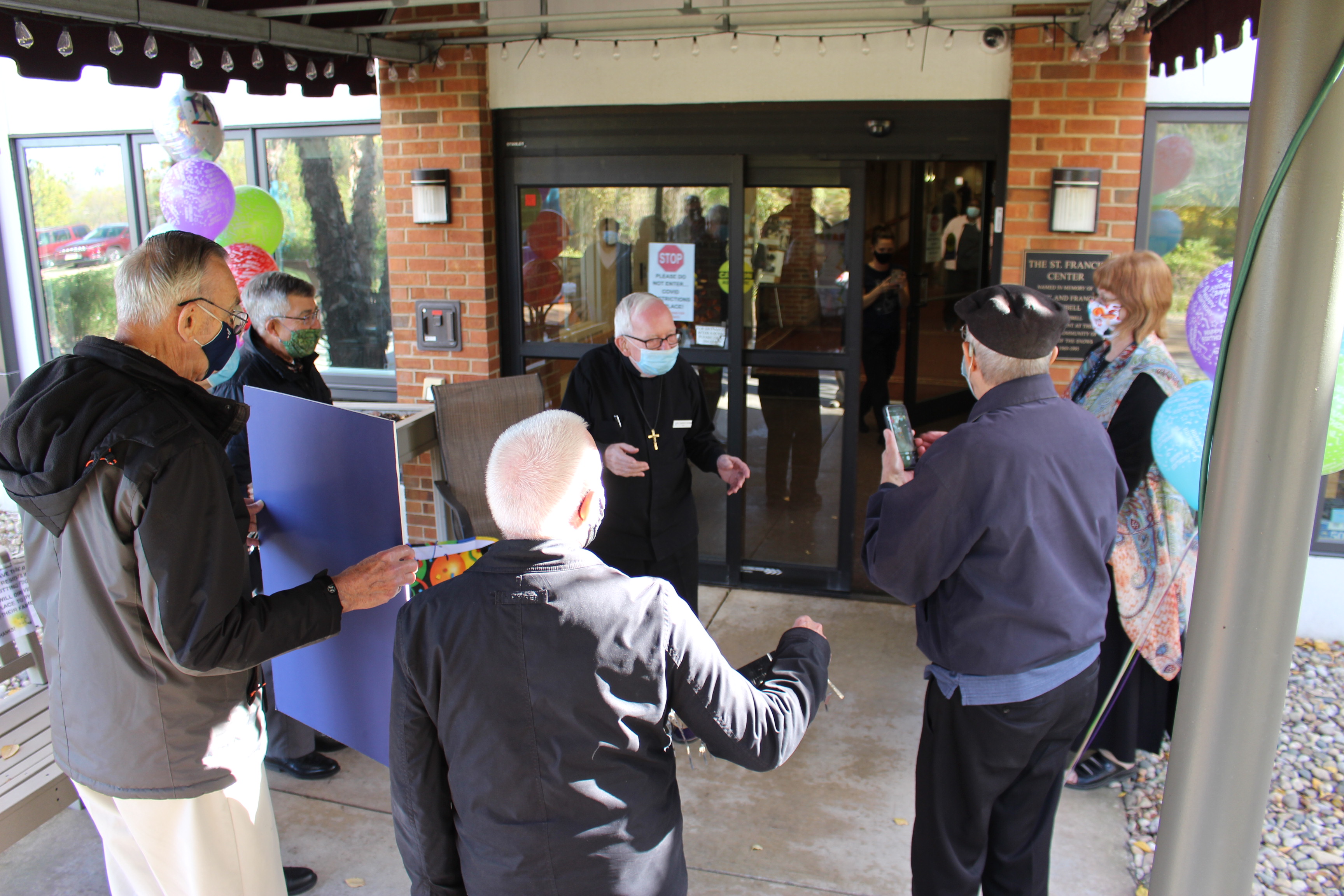 Fr Zachman was clearly surprised by the crowd awaiting him 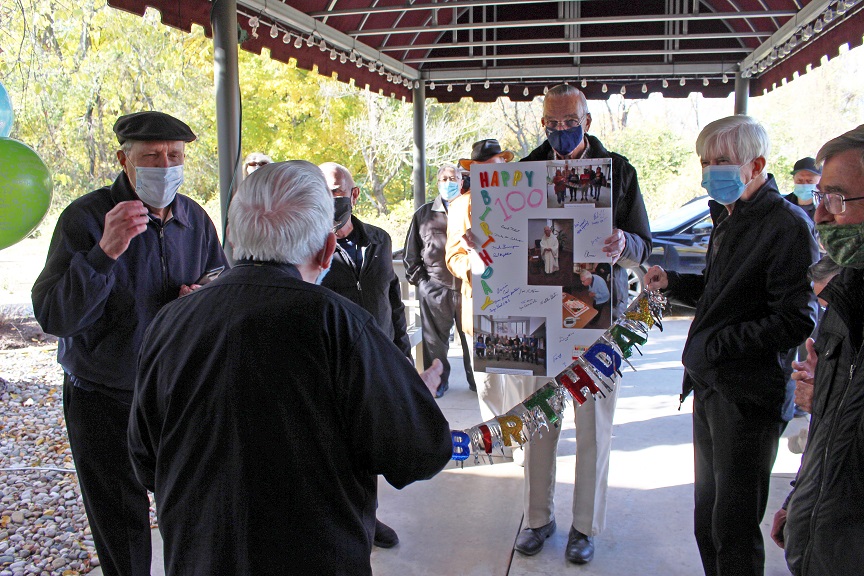 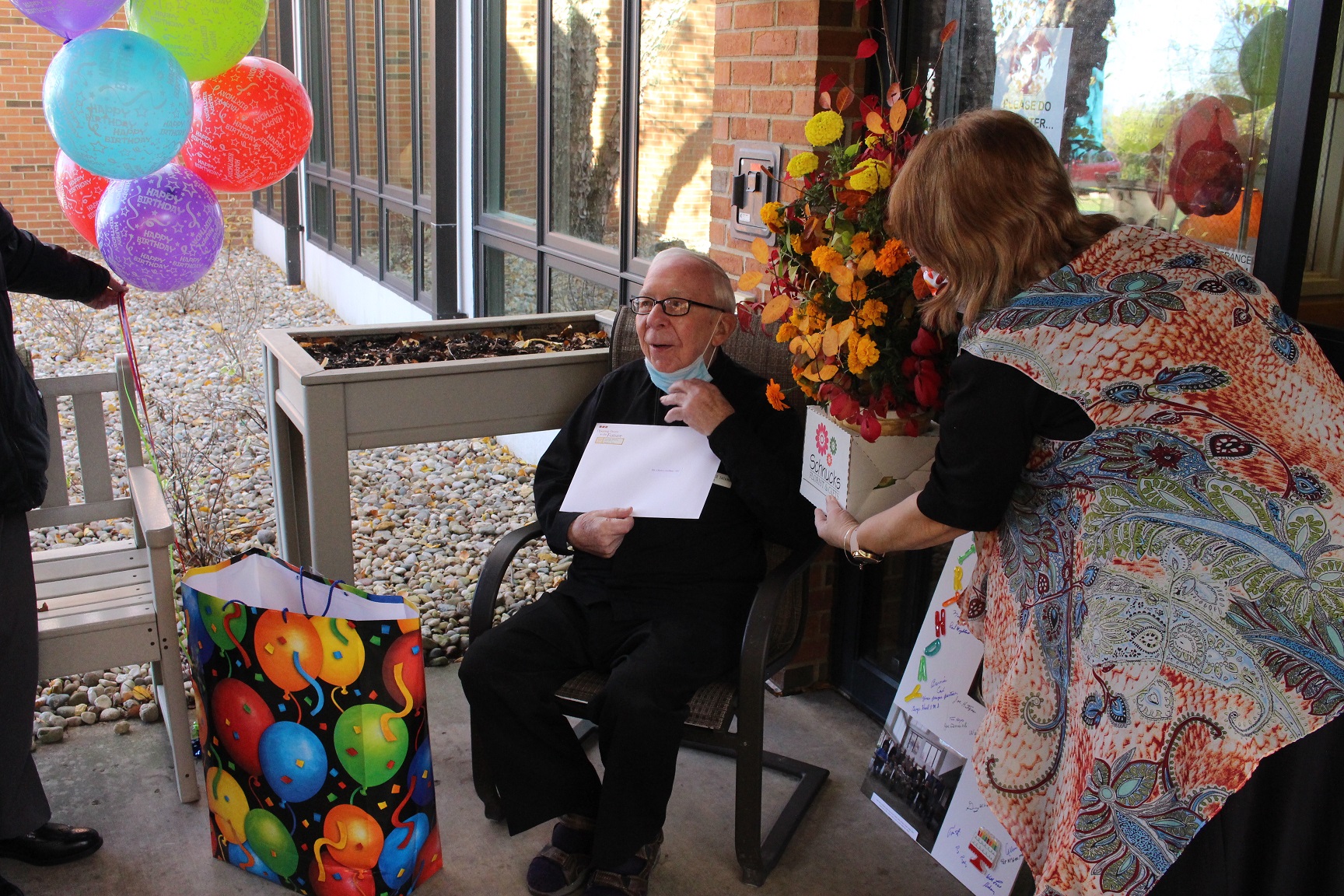 Flowers arrived to go with all the rest 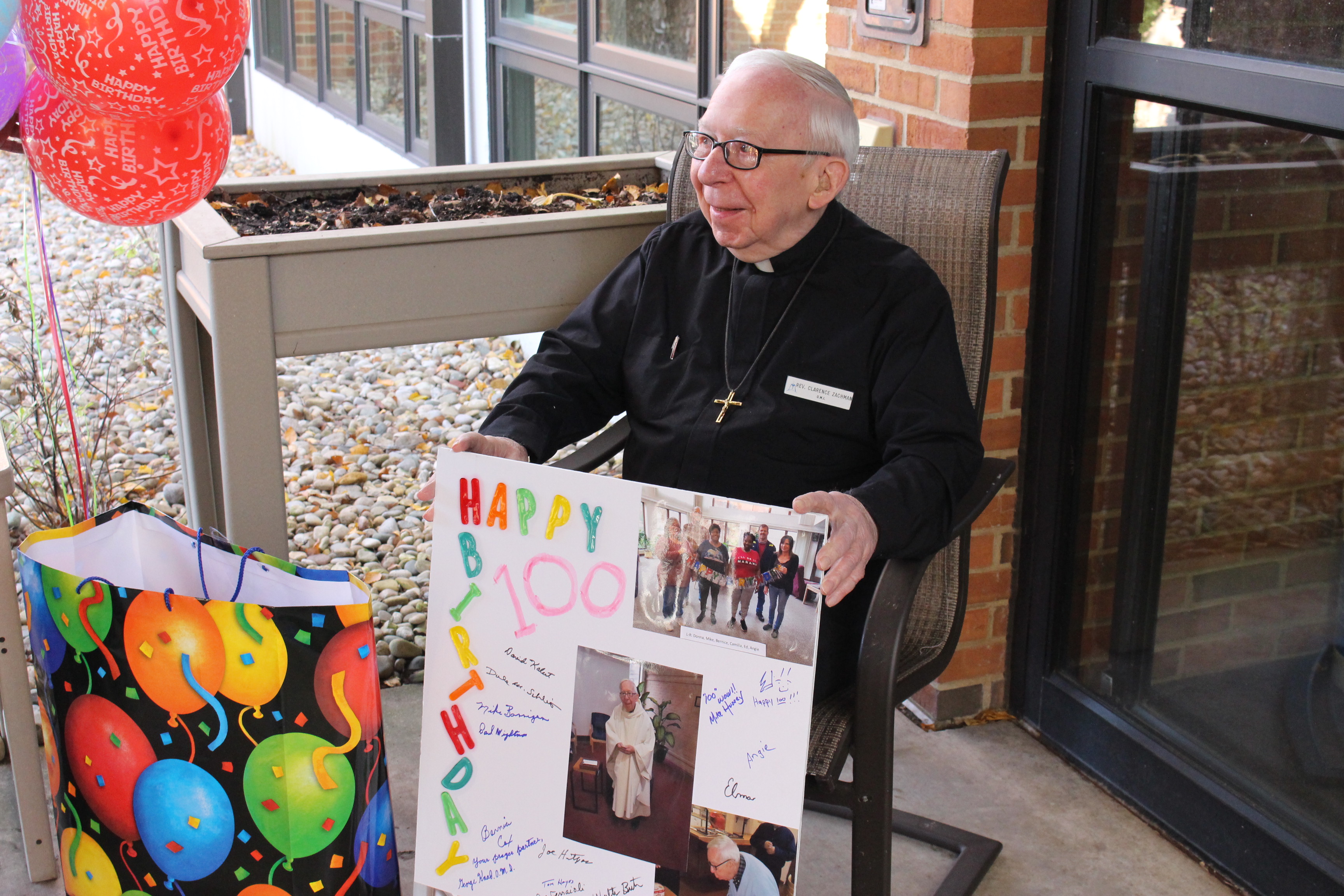 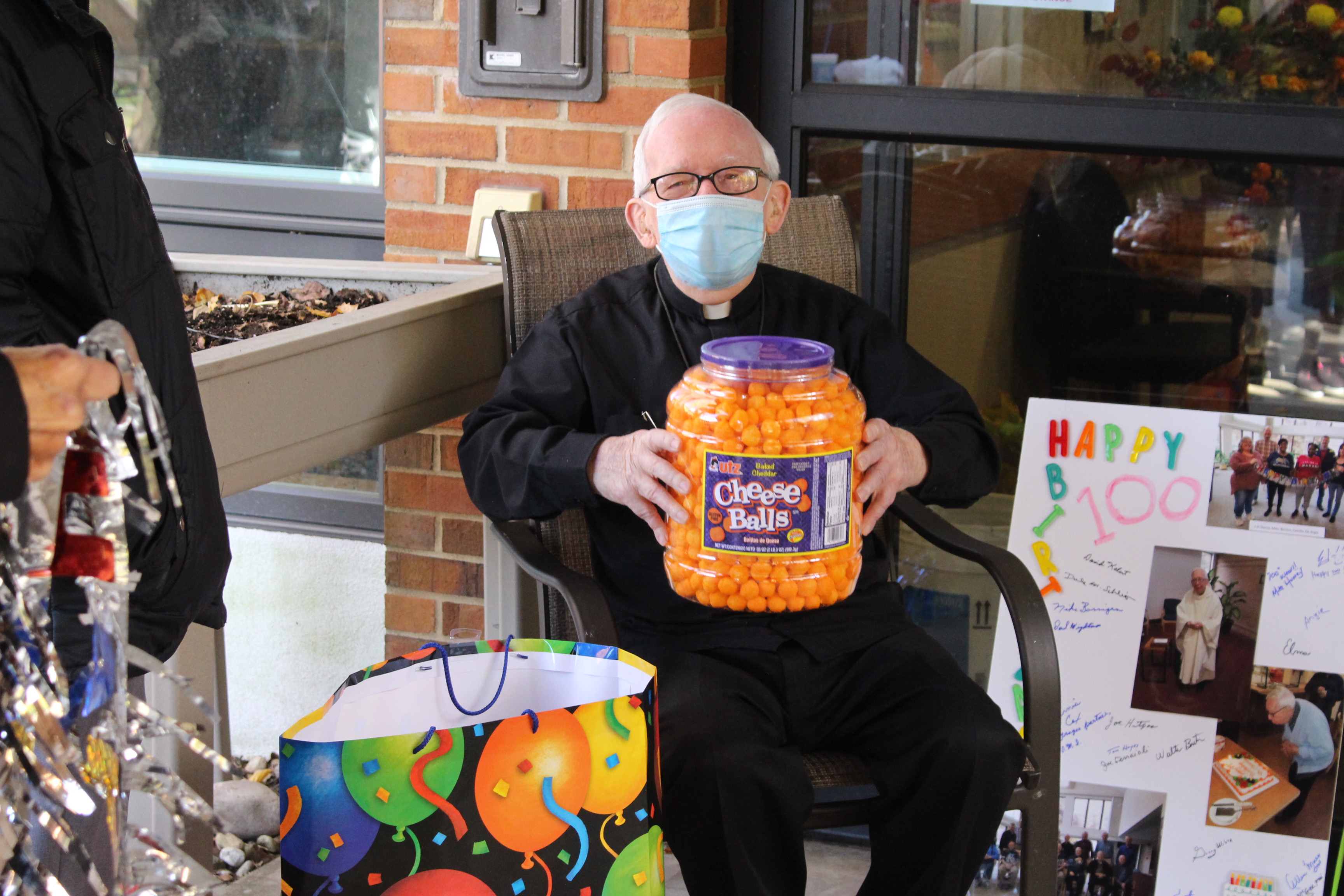 This “bucket” of his favorite snacks should last quite a while! 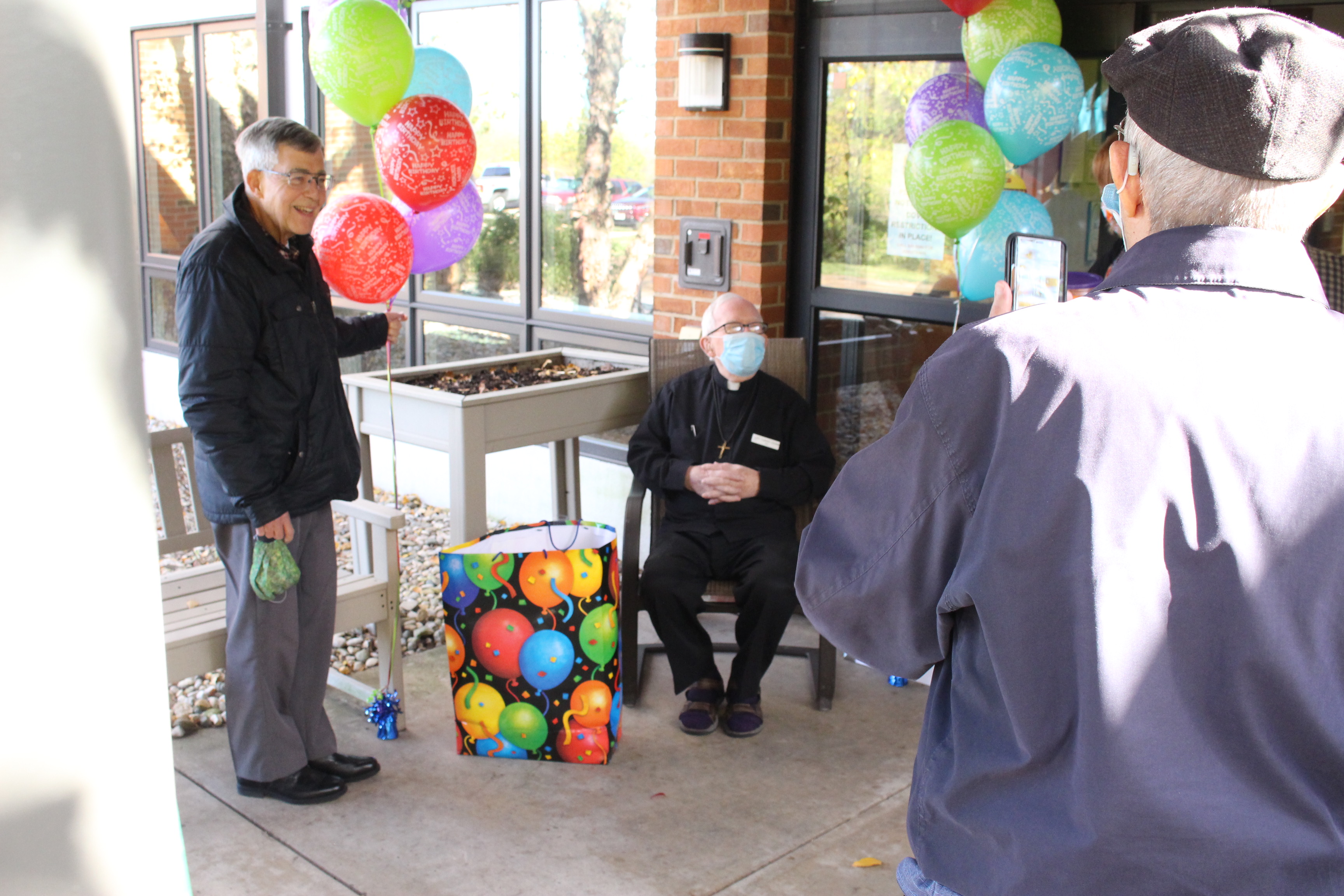 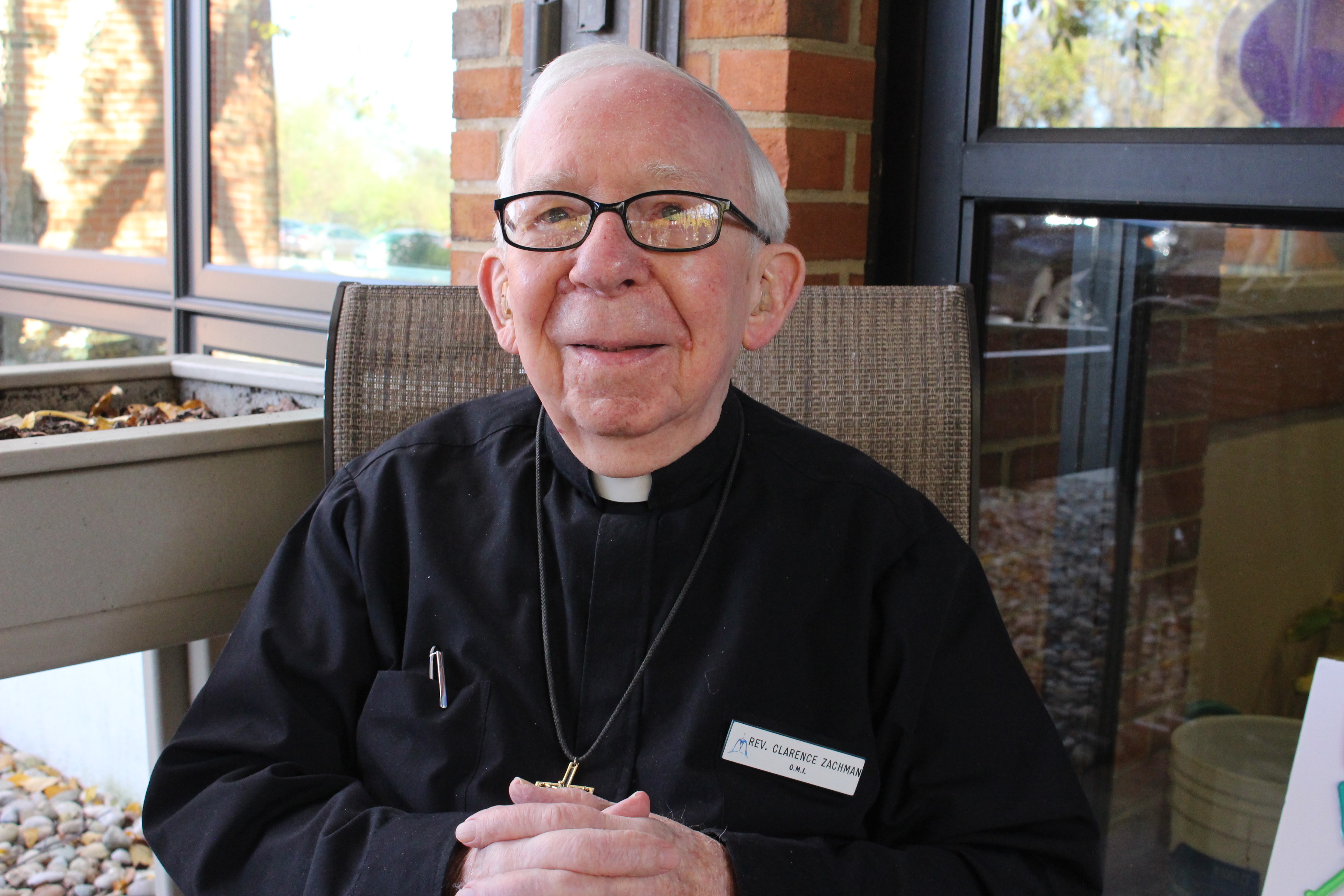 Looking much younger than his age and as cheerful as ever, Fr. Clarence is ready to begin another year of spreading the good news!