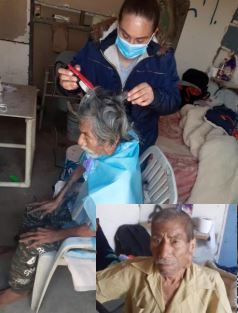 Alma is a 36-year-old woman with 2 children, who was a beneficiary of our scholarship program a year ago, thanks to her donor Mary Frances Tapscott. She is very grateful, because thanks to that program, she is a lawyer. She currently works half time as a lawyer and half time in a beauty salon. She worked as a hairdresser while she was going to the university.

This week we asked her if she could cut the hair of our bed-ridden friend Luis. Luis is very frail, and it hurts him to move. Alma immediately said yes. Since he did not have any wall sockets in his small room, we had to make an extension cord with 2 old wires, but we got her going. She did a great job. After she finished, we took a picture and showed to him, and he laughed and said “I look like I am 15 again”.

Alma’s daughter who is 15 often works with us helping make food baskets and works with the migrant program. She plans to attend our next SEARCH retreat. Alma’s 13-year-old son has Asperger Syndrome and is in a special school that is very expensive. Alma told us that a few years ago she attended mass at the parish and was really feeling sad and mad because she was about to give up her schooling. She did not have the money to pay for her son’s school and her school. But in the announcements at the end of mass she learned of the scholarship program. So, she said that joining us to cut Luis’ hair was just giving back a small part of what she has received.

This week we had the occasion to give baths to of two our friends that are bed-ridden. You really enter a new level of 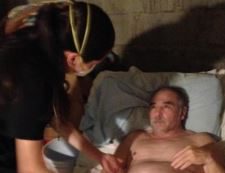 being trusted, a new level of overcoming your personal space limits, and a new level of treating others as if you were ministering to Christ. In the first case we gave a bath to Nico, a stroke victim. It was the first in a long time, at least to the extent evidenced by how much dead skin we removed. He had places that were thought to be just normal discolorations, that gave way to fresh beautiful skin. As we worked on his feet, using an exfoliant sponge, he would cringe and jump. At first, we thought we were hurting him, but soon the cringes turned into reactive uncontrolled laughs.

Karla, one our accompanying medical students, was trying to attend her online class via cellphone, but managed to multitask and took 40 minutes clipping his nails, carefully revealing a fifty-year old’s feet under those 80-year-old looking feet. We got another laugh from Nico when we asked what color nail polish he wanted.

In the second case, we had spent all night getting Luis treated at the hospital in Tecate, some 25 miles away. Karla, said he had fluid accumulating in the belly that needed to be removed (caused by a failing liver). We had to go to Tecate because the hospitals in Tijuana are so crowded with COVID-19 patients. Karla asked the doctor if she could
accompany him during the procedure; her medical interests usurping the COVID-19 risks. She not only assisted with Luis but was elated to video a suturing job. 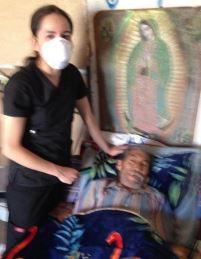 The next day we returned to check Luis’ condition and give him a bath. Perhaps because he was feeling so much better, or perhaps because we had earned a new level of trust, he submitted to receiving a bath. Luis is so frail and skinny, except when his belly is bloated, just trying to stand is suffering on the cross for him. To submit to a bath was to submit to torture. While sitting in a plastic chair out back, we went to work, again revealing fresh skin under layers of … something else. We discovered the start of a bedsore. We combed his hair revealing a smile. Laying him back in his fresh bed, we reviewed with him again his new medication regiment from the night before. For the first time, we prayed with him. He had never expressed an interest in prayer, but now his hands folded, and his eyes closed.

This wonderful experience revealed to us how beautiful those are who care for the elderly, the disabled, and the forgotten.

Isabel is a third year medical student, whose donors are Jim & Elizabeth Hanink. She joined us for her first experience treating an actual patient. It was to treat the toe of Leo, who stepped on a nail 2 years ago, and the wound will not heal because he has diabetes. She cut away the calloused skin around the wound and cleaned it out. We showed the pictures to her mother,