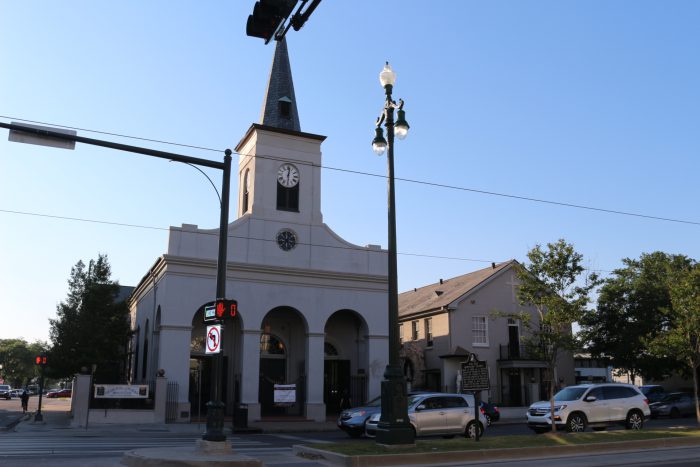 Ministering to people during a pandemic is nothing new at an Oblate church in New Orleans.

(Editor’s note: In late 2020, Fr. Tony Rigoli, OMI, Pastor of Our Lady of Guadalupe contracted the Covid Virus, he is currently recovering)

In recent months, the Oblates at Our Lady of Guadalupe Church have been reaching out to people impacted by the Covid-19 pandemic.  The church sits on the edge of the French Quarter, an area that has been hit hard by the virus. 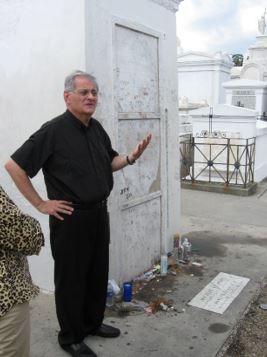 “During this crisis we have been blessed with so many wonderful acts of kindness,” said Fr. Tony Rigoli, O.M.I. Pastor at the church.  “Since the pandemic, our St. Jude Community Center, which feeds the homeless breakfast and lunch, is preparing about 250 meals a day thanks to the generosity of our benefactors.”

Helping people during a pandemic has been a tradition at Our Lady of Guadalupe Church.  The church, which also includes the International Shrine of St. Jude, is the oldest church building in New Orleans and dates back to 1826.  It was built as a mortuary chapel for victims of the Yellow Fever.

In the era predating modern science, medical practitioners believed Yellow Fever could be spread by exposure to the dead or by transporting the dead through the city’s street for burial.  Therefore, a Mortuary Chapel was established close to St. Louis Cemetery, the main burial location for most of New Orleans Catholic families.

An eyewitness account of a funeral service in the Mortuary Chapel was written by Joseph Holt Ingraham in 1835:

On approaching the Catholic Chapel I discovered many carriages extended in a long line up the street, and a hearse with tall black plumes, before the door of the building.  Passing through the crowd around the entrance, I had a full view of the interior.

There was neither pew nor seat; elevated upon a high frame or altar was thrown a black velvet blanket, was placed a coffin, covered also with black velvet.  A dozen huge candles, nearly as long and as large as a ship’s royalmast, standing in candlesticks five feet high, burned around the corpse mingle with innumerable candles of the ordinary size, which were thickly sprinkled among them like lesser stars, amid the twilight gloom of the chapel.

The mourners formed a lane from the altar to the door, each holding a long, unlighted wax taper, tipped at the larger end with red, and ornamented with fanciful paper cuttings.  Around the door, and along the sides of the chapel stood casual spectators and strangers.  As I entered, several priests and singing boys in the black and white robes of their order, were chanting the service of the dead.  The effect was solemn and impressive.

In 1853 Yellow Fever returned to New Orleans with disastrous impact.  During the month of August, more than 1,000 people were dying every week in the city.  The lines of carriages carrying the dead stretched sometimes for more than two miles leading to the Mortuary Chapel and nearby cemetery.  Funeral services took place continuously throughout the day and well into the night.

During the Civil War, the church was used for funerals of soldiers and was also used for church services for members of the Confederate army.  After the war, the church was abandoned several times but eventually began to be used by a growing Italian immigrant community.

In 1918 the Missionary Oblates arrived in New Orleans and took responsibility for several churches including the Mortuary Church.  The name was changed to Our Lady of Guadalupe to provide a place of worship for Spanish-speaking Catholics. 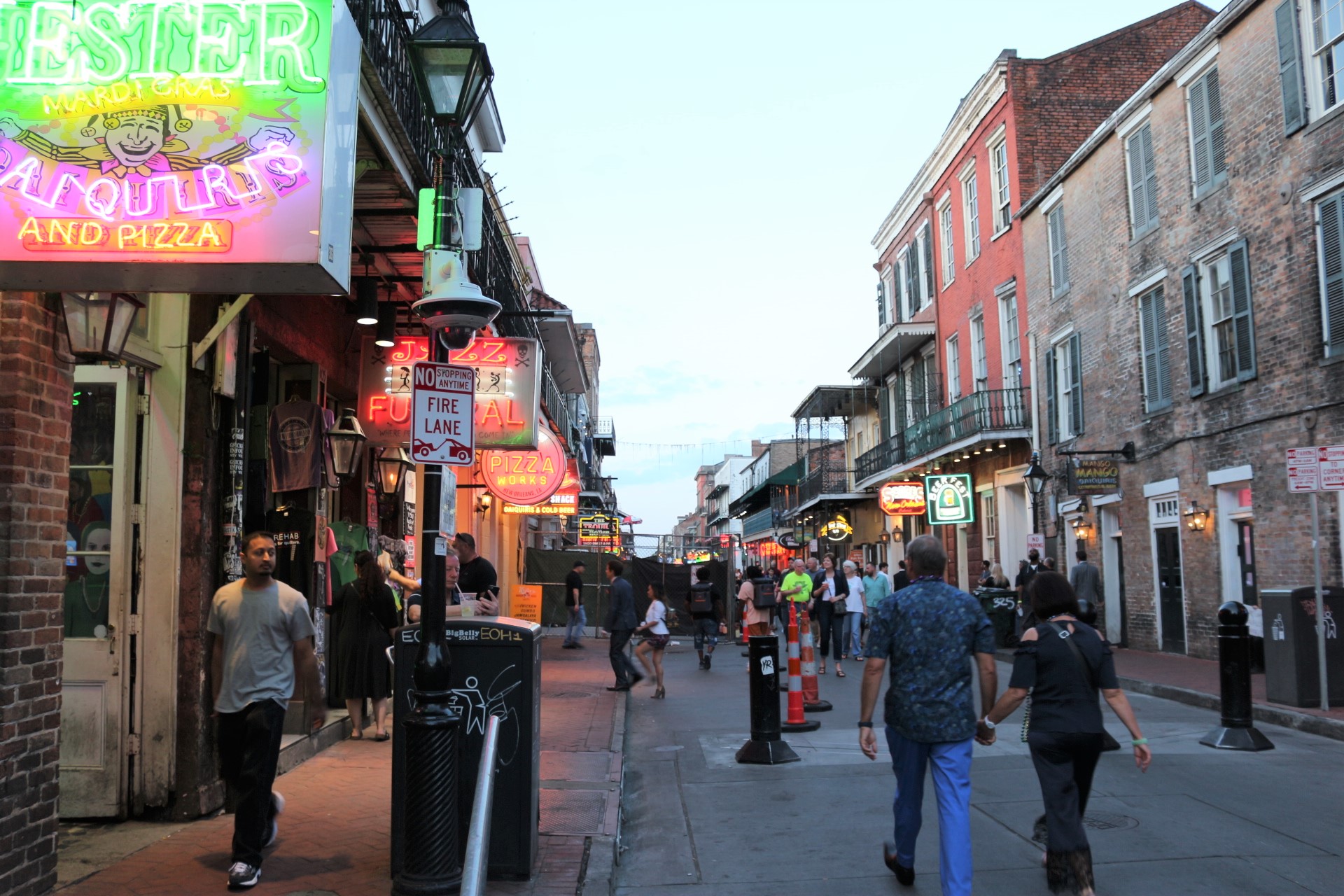 Entrance to the French Quarter just across the street from St. Jude’s

Over the years, the French Quarter began to grow as a major tourist attraction.  The Oblates at Our Lady of Guadalupe chose to focus not on the tourists but the people living on the outskirts of the French Quarter, some of the poorest people in New Orleans.  The St. Jude Community Center, located across the street, became a beacon of hope in the neighborhood, providing food, shelter and other services to the neediest residents of New Orleans.

In 2005 the church and shrine survived another disaster – Hurricane Katrina.  For years the Oblates and parishioners helped to care for the victims of the hurricane and helped them to rebuild their lives and city.

“That was truly Oblate work,” said Fr. Tony who had just arrived in New Orleans a few months before the hurricane hit.  “We were caring for the most abandoned.  These people had lost everything.  More than just their houses, they had lost their communities, their parishes, their friend and neighborhoods.”

This year that sense of community and reaching out to the less fortunate has been in abundance at the parish during the Covid-19 pandemic.  Many volunteers have come to share in the Oblates’ outreach ministries.  Some of those volunteers are members of the Orleans Parish Sheriff’s Office who come every other week to sanitize the buildings.  They feel connected to Our Lady of Guadalupe Church because it is the official chapel of the New Orleans police and fire departments. 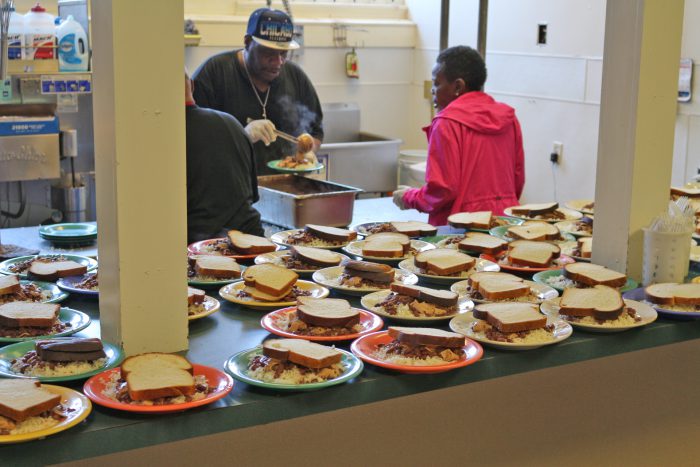 Workers prepare the noon meal for the homeless at St. Jude’s soup kitchen

In times of crisis, Our Lady of Guadalupe Church has been there for nearly 200 years to help the needy.  But the Oblates don’t need an epidemic or disaster to minster to people who need help.  Every day they welcome friends who just need a helping hand.  Spouses struggling with failing relationships, addicts seeking freedom from drugs and alcohol, the despondent on the verge of suicide, the unemployed in search of a job and the homeless just wanting a safe place to spend the night, they all come Our Lady of Guadalupe Church to find comfort.

The Oblates see the poor with their many faces every day in New Orleans.  And every day they show them preference.