Father Ray Cook, O.M.I. is living proof that good things come to those who wait. 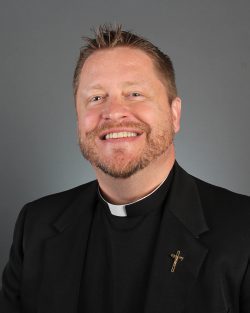 To say that Fr. Ray was a late bloomer to a religious vocation would be an understatement.  He was 35 years old when he decided to join the Missionary Oblates’ formation program.

“It was a slow process for me, it took years to decide on religious life,” said Fr. Ray.  “I never had a big conversion moment, it came gradually.”

Born in Connecticut, Fr. Ray grew up interested in religious life but didn’t discern his calling at the time.  His interest was in technology and he found work as a Network Administrator for the Shubert Theatre in New Haven, Connecticut.  Later he worked for Yale New Haven Hospital where he had several software and database responsibilities.

For five years Fr. Ray also traveled the United States teaching as a Microsoft Authorized Instructor.  During a stay in St. Louis, he happened to visit the National Shrine of Our Lady of the Snows across the river in Belleville, Illinois.  He felt at home, and the idea of religious life returned.

Father Ray applied to join the Oblates in 2003.  His formation journey took nine years, during which time he was struck by the Oblates’ desire to serve the poor and most in need.  He also found the Oblates to be very down to earth, and he identified with their strong devotion to Mary.  In 2012 Fr. Ray was ordained a Missionary Oblate priest.

Father Ray’s first assignment brought him back to Belleville where his Oblate journey had begun.  He was a member of the staff at King’s House Retreat and Renewal Center and also helped out at area parishes.  Father Ray’s ministry also took him to the impoverished East St. Louis community where he started a youth group at the Family Center run by the Sparkill Dominican Sisters. 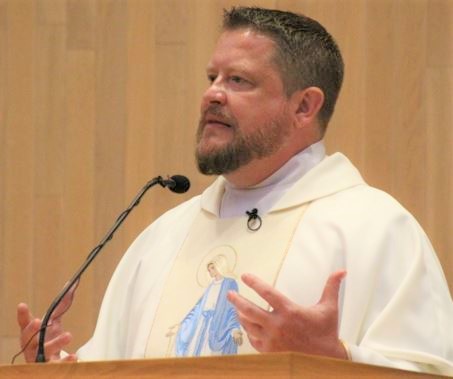 Fr. Ray preaching at the Annual Novena to Our Lady of the Snows

In 2014 Fr. Ray’s Oblate journey took him to a vastly different mission field, at one of the most prestigious universities in the country.  He became Director of the Newman Center and the Chaplain and Administrator of St. Mary’s Chapel at Rice University in Houston, Texas.

Ministering to students at an acclaimed university may not seem to be missionary work.  But Fr. Ray soon discovered that the students have many of the same struggles as other young people, and sometimes even additional difficulties.

“All of the students here were at the top of their class in high school,” said Fr. Ray.  “But when they get here they are in a competitive environment with others who are just as academically included, and that can be alarming for them when they are suddenly ‘not the best’ in their class.”

Father’s Ray work is diverse.  Along with the pastoral and administration work that goes along with 600 community and student members, his ministry includes everything from baptisms to funerals.  He is also a Certified Disaster Care Specialist with the diocesan response team for the Red Cross, chaplain of the Serra Club of Houston, and last year earned a Doctor of Ministry in the field of Preaching while working full time.

In addition to serving the needs of the students, Fr. Ray is also available to the faculty and staff at Rice as well as people in the community who come to the university chapel for prayer and guidance.

When Fr. Ray works with students, he makes sure to teach them Oblate values.  One of those values is perseverance.

As an Oblate, Fr. Ray took four vows at his ordination, the traditional vows of poverty, chasity and obedience, along with a unique Oblate vow of perseverance.  Father Ray knows all about perseverance.  He was 44-years-olds when he finally became a priest and found his ultimate joy.  Today, he is helping young people persevere through their trials and difficulties so that they too can find their ultimate joy. 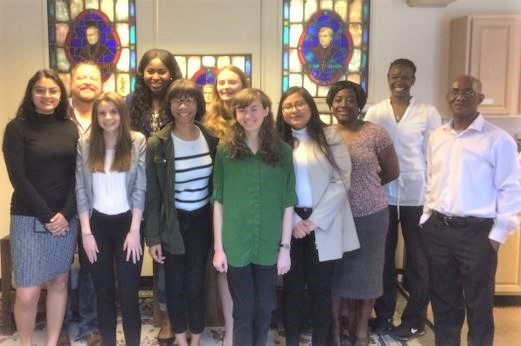 Fr Ray (back row , left) poses with visitors to the OMIUSA JPIC Office in Washington, DC

“Last May a Rice alumnus, who works for the Texas Drug and Development Center, put out a call for volunteers for the new Covid-19 vaccine from Pfizer.  Because it was hitting so close to home, and my call as an Oblate compels me, I decided to sign up as a volunteer to participate in the study.  I discussed it with my friends and family and most advised against it because I am asthmatic.  But after much time in prayer and guidance from Our Lord Jesus, I decided to proceed.”

“In August I arrived at the appointment that lasted four hours as they went through my complete medical history.  They had to make sure that if I reacted to the vaccine it was clear what might have caused the reaction.  I received the first of two doses.  I sat there to wait for any severe reactions.”

“Everything seemed fine so they sent me home with emergency contact cards, a Covid-19 test kit (that they could retrieve at any hour of the day or night should I come down with symptoms), a thermometer, a gauge to measure the injection site and an app to record daily updates.”

“The next day I was scheduled to give blood and was informed that I would be unable to give blood for two years so they could determine how this vaccine affected the bloodstream.  Needless to say, this was a bit nerve-racking as I entered into an unknown study that will continue until August of 2022.”

“A few weeks later I received the second injection.  A couple of days later I could hardly move as I was so exhausted.  Fortunately the next day I felt fine.”

“The trial was a double-blind study, which means that the participant nor the doctors know if you are receiving the vaccine or the placebo.  Turns out I received the placebo because I eventually contract Covid.  I then received the vaccine as part of a study for vaccine efficacy.”

“Of course, I will continue to pray that the poor in our world will have access to the new vaccines.  I also give thanks to God for creating minds that are able to protect the world through science.”