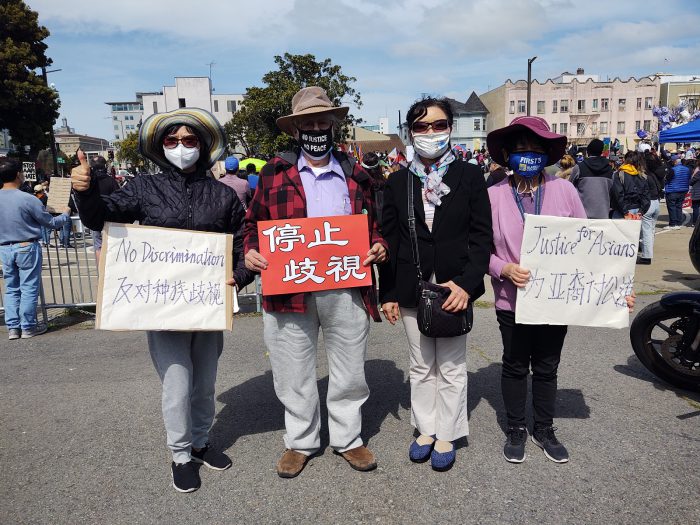 Fr. Scott Hill, OMI is second from left in this photo with three unidentified protestors

As in other parts of the country, Oakland, California’s Chinatown has experienced a recent rise in attacks on Asian women and men, as well as shops. With these brazen attacks, the Asian and Black Community have come together, protecting the vulnerable elders of the Community. Easter weekend brought the larger Oakland Community together for a rally demanding an end to racism, ageism, and hate. Fr. Scott Hill, OMI, of Sacred Heart Parish in Oakland joined the crowd and is seen in the photo above holding a sign which translated reads, “Stop racism.”

The event was organized by “Asians with Attitude” (AWA). Primarily Asian youth from the neighborhood who spoke of protecting elders, building up the Asian Community and strengthening the visibility of the Asian/Pacific Islander presence in Oakland. There were no politicians invited. According to Fr. Hill, “The mood of the crowd was angry but respectful. I sensed a great feeling of Pride that thread the AAPI Community together. They were loud and proud. Many national flags representing the variety of Asian and Pacific Islanders waved their presence during the rally. The flags, as well as “ol Glory led that march down 8th Street, through Chinatown and up the main, downtown, thoroughfare of Broadway Street, a march of 3/4 of a mile.”

Fr. Hill described the scene and the photo, “In the picture I joined with these women as the crowd took over the streets of downtown Oakland in an act of peaceful/civil disobedience. As  the march begins, I find myself in the front of the crowd, by the time we have walked 6 blocks, I find myself trailing the parade until I needed to move to the sidewalk, opening the road to vehicle traffic. These women were long gone!”

“In the end I am reminded of something Pope Francis said in the documentary, “Francesco.” “Looking to the common good is much more than the sum of what is good for individuals. It means having a regard for all citizens and seeking to respond effectively to the needs of the least fortunate.” This Triduum Weekend was such a reminder.”