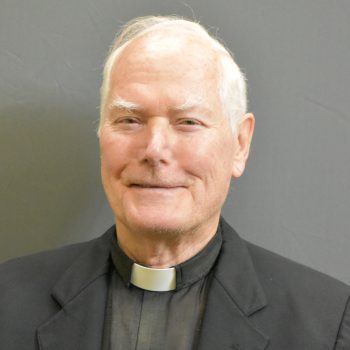 Father Jim Foelker, O.M.I. spent a lot of time on the road, so that pilots could let their spirits soar.

Father Jim was the Catholic Chaplain at Kingsville Naval Air Station in Texas. The military base is one of the U.S. Navy’s premier locations for jet aviation training.

The base is a six-hour roundtrip from Fr. Jim’s home in San Antonio.  But that didn’t stop Fr. Jim from making the trip at least once a week during his “retirement.”  As a proud American and priest, he felt it was his duty to minister at the base.

“If I didn’t go to Kingsville there would have been no Mass held on the base,” said Fr. Jim.  “It really was an ideal job for someone who is in reduced ministry, even with the long drive.” 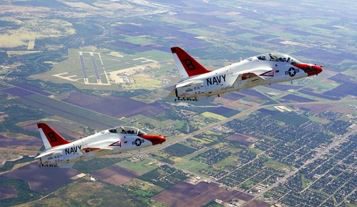 Father Jim, age 90, recently had to give up his position as Chaplain at the base because of declining health.  But he still remains connected to the men and women at Kingsville through the power of prayer.

Kingsville Naval Air Station is home to about 1,500 military and civilian employees.  About 50 percent of the Navy and Marine tactical jet pilots are trained there every year.

In addition to presiding at weekly Masses on the base, Fr. Jim also took part in events such as the “Blessings of the Wings.”  During the ceremony, newly-graduated pilots have their wing pins blessed and then pinned to a tapestry.  They are then prayed for at Mass and other services for their safe return from their missions.

Father Jim will not be earning any pilot wings, but he has been earning his angel wings throughout a life that has always been connected to the Missionary Oblates. Father Jim was born in the Rio Grande Valley in 1930, about 20 miles from the Mexican border.  The Oblates ministered in the area and made a lasting impression on the youngster who began serving Mass every Monday morning at the age of six. 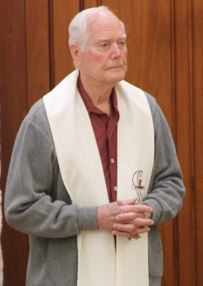 “I actually didn’t know that there were priests that weren’t Oblates,” said Fr. Jim.  “It wasn’t until I got to the seminary that I learned there were diocesan priests and other orders.  But it never entered my mind that I would want to join them.  I always wanted to be an Oblate.”

Father Jim was ordained an Oblate priest in 1955.  His first assignment, as assistant pastor at a parish in Austin, Texas, was not easy.  His pastor was strict, and the rookie priest got only one day off a month and had to preside at the 6:00 a.m. Mass every day.

Life eventually got less rigid as Fr. Jim ministered at parishes throughout Texas.  He also spent a few years ministering in New Orleans and also as a Hospital Chaplain.

When he ministered along the Mexican border, Fr. Jim reached out to the poor with their many faces.  He distributed food and clothing to anyone in need, regardless of how they arrived at his doorstep.

“I felt so sorry for them.  All they wanted to do was feed their families,” said Fr. Jim.

One day Fr. Jim received a phone call from a man he had helped many years earlier.  The man had made his way to Louisiana and found work as a dishwasher.  He saved his money and eventually returned to Guatemala where he started a family business.

During his 65 years as a priest, gentleness has been a hallmark of Fr. Jim’s ministry.  He didn’t make any headlines or receive media attention, but in his simple way influenced and inspired countless people, one of whom is his brother Oblate, Fr. Andy Sensenig, O.M.I.

‘From Fr. Jim I learned that being a good missionary is not having all the answers, but its having a willingness to travel with others, so that the answers can be found together,” said Fr. Andy.  “Father Jim taught me that all I need to do is to help one person at a time, and the world will be changed.”

And Fr. Jim continues to change the world one person at a time, on land and in the air.