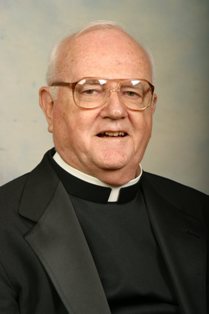 (Editor’s note: As an introduction to the webinar on Fr. McLean, Oblate Father Séamus Finn offers a personal reflection on Fr. Mclean’s legacy.)

I first met Fr. George McLean OMI, by reputation and later in person  in the fall of 1971. I had arrived as a first-year philosophy student at Oblate College in Washington DC to begin my studies in first year philosophy. I can still recall the words of advice and caution from senior classmen that first year studies were all in preparation for studying metaphysics with George McLean our second year. (I was to learn in later years that Fr McLean and I are graduates of Lowell High School and were members of the Lowell High School band).

His presence on campus was always fleeting as he accommodated his other teaching responsibilities in the philosophy department of catholic university and his summer excursions to seminars, conferences and symposium around the world. His course on metaphysics did not disappoint mostly because he often interspersed commentary on issues in US society and political life as well as stories from his engagement with other philosophical traditions and faiths into his lectures.

As a Missionary Oblate of Mary Immaculate George was convinced that the “mission of philosophy” was to help people and societies to wrestle with the pressing issues of the day through fundamental analysis critique and imagination. He applied this perspective to his many lectures and publications and memberships in philosophical organizations around the world. He also sought to institutionalize this vision when he established The Council for Research and Values and Philosophy, www.crvp.org  which he established in the 1960’s continues today at Catholic University.

Much of Fr McLean’s missionary and visionary work on Culture and Values and on democracy and globalization continues at the center named in his honor at CUA; The McLean Center for the Study of Culture and Values https://nest.cua.edu/organization/mcscv

The recording below is of a presentation/discussion  that was organized recently.

This Zoom webinar focusing on the work and legacy of Fr. George McLean, OMI (Informational flyer below) is now available for viewing on demand. The 90-minute webinar was recorded as presented on March 31, 2021. It Features Dr. William Sweet, Professor of Philosophy and Director of the Centre for Philosophy, Theology and Cultural Traditions at St Francis Xavier University, Nova Scotia, Canada.

An amazing historical review of George’ McLean’s OMI work across the world and his continuing influence and that of his students and colleagues on the pressing issue of democracy and populism today. George was a frequent visitor to OMI communities across the world when he travelled for his work.

One of George’s passions was asking about how philosophy can serve and help society and countries to engage non-violently in resolving difficult and seemingly intractable issues.

You will then need to enter the following Passcode to begin the video: 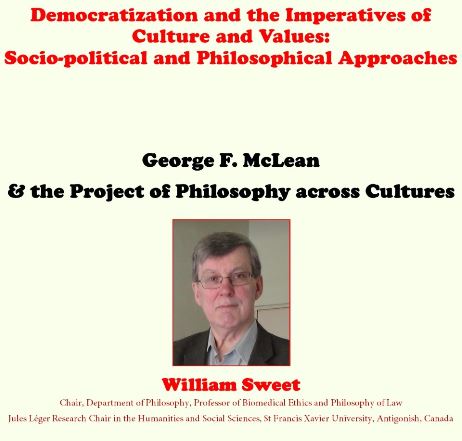