By Will Shaw, compiled from Facebook with Fr. Antonio Ponce, OMI and Fr. James Allen, OMI 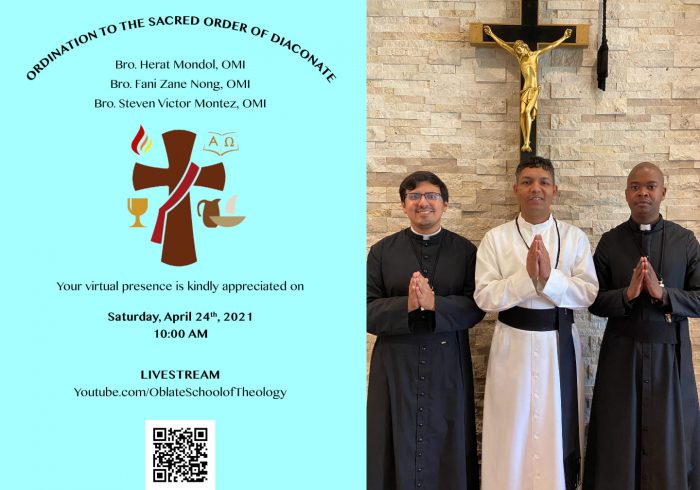 Along with the program for the Ordination is a photo of Oblate Brothers, Steven Victor Montez, Herat Mondol, and Fani Zane Nong

Saturday April 24, 2021 was a day long awaited by Oblate Brothers Herat Mondol, Fani Zane Nong, and Steven Montez who were Ordained to the Diaconate by Archbishop Gustavo García-Siller, M.Sp.S, of San Antonio, Tx.

The crowd who gathered at the Immaculate Conception Chapel on the Campus of Oblate School of Theology to celebrate the occasion was smaller than usual due to Covid-19 restrictions, but many more watched the proceedings online as they were live-streamed on the Scholasticate’s Facebook page. In addition, nearly 30 Oblate priests from San Antonio and all around the country concelebrated including:  Bishop Michael Pfeifer, OMI, Emeritus-bishop of San Angelo, TX. and the Provincial leadership team consisting of the Very Rev. Louis Studer, OMI, U.S. Provincial, Vicars-provincial Art Flores and James Brobst and Treasurer James Chambers.

In his remarks at the end of the Mass, Fr. Studer congratulated the three men and thanked the Archbishop and the Oblate formators, Fathers Antonio Ponce, David Ullrich and Ronald LaFramboise. He also invited the gathering to a celebratory luncheon at the Whitley Center.

Brother Herat is a member of the Delegation of Bangladesh; Bro. Zane is from Botswana, a mission of the Province of Lesotho; and Bro. Steve is a native of Kingsville, TX, and a member of the United States Province. Brother Steven’s parents were present at the Ordination, while the live-streaming allowed the families and friends of Brothers Herat and Zane to take part from far-off continents.

Bro. Steven Montez, will be serving at the Oblate’s Most Precious Blood Parish in Chula Vista, CA. prior to his priestly ordination scheduled for September 2021. Bro. Herat Mondol will be returning to his native Bangladesh where the date of his priestly ordination will be determined by the local Superior. Bro. Fani Nane Zong, will remain in formation in San Antonio for another year.

Click here to view a video Recording of the entire Mass 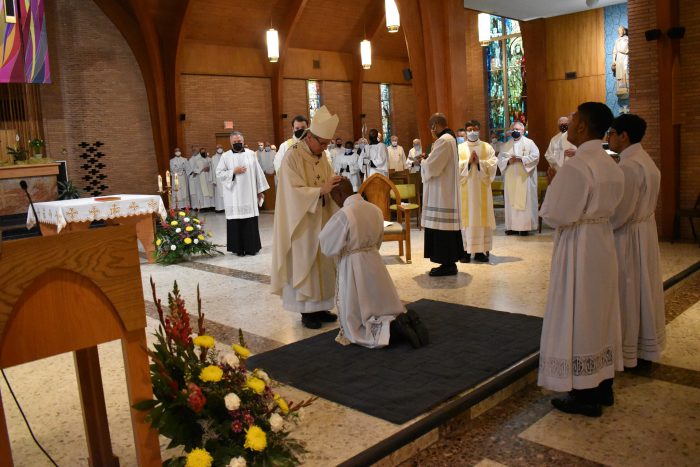