I consider myself an Oblate lifer in the sense that as long as I can remember I wanted to be a priest.  I didn’t have any real deep, profound spiritual reason why I wanted to follow that path.  I wanted to do the things father did in the parish.  So even in the earliest grades I remember telling my little girlfriend that she could be my housekeeper when I became a priest. 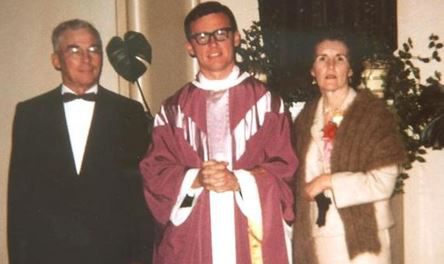 Fr. Allen and his parents at his ordination

When I was in eighth grade I made my decision that I wanted to go to a minor seminary.  My pastor and the assistant in the parish didn’t really believe in minor seminaries.  My mother even sent me to the office of the Assistant Pastor thinking he could talk me out of it because she wasn’t keen on me going away from home at 14.  So I decided to start writing to a couple of religious orders.

Then in eighth grade a Missionary Oblate of Mary Immaculate came to talk to us at school, Fr. Valentine Goetz, O.M.I.  That’s when I began to bond with the Oblates.  I went to a workshop week at our minor seminary in Carthage, Missouri.  There were Oblate scholastics there who were wonderful men and who would become wonderful priests.  I simply liked them and I wanted to be one of them.

I was accepted to attend the minor seminary in the ninth grade but for some reason, I don’t even remember now, I didn’t go.  So I went to a Catholic high school in Omaha.  I was very unhappy there and it was obvious that it wasn’t where I needed to be.

In May of my freshman year I was at Tuesday evening devotion at my parish and my little sister came over to church and found me.  She said there was a priest who called and is going to call me back.  It was an Oblate from the minor seminary, Fr. Al Svobodny, O.M.I. and he told me the Oblates were still interested in me.  I was ready to go.  I would have packed up and gone the next day if I could, but I had to wait and go in the fall. 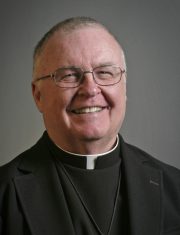 In 1958 I finished junior college and moved on to the Oblate Novitiate in Godfrey, Illinois.  It was an intense year of spiritual preparation. They told us it was going to be the happiest year of our lives.  But frankly, I kept waiting and asking when the happiness was going to begin.  But I got through it and pronounced my first vows as an Oblate.

I went to our scholasticate in Mississippi and got there on a Monday.  On Friday the superior came into the dining room, rang the bell and said that I and another student were going to leave to study in Rome that night.  We went home first to visit with our family, and then took a ship to Italy knowing that for the next seven years we would not be able to return home.  I could accept that, it was part of the program.

I took a ship to Rome on what was called a “Mediterranean Cruise.”  I was on the ocean for nine days and seasick for seven of them.  When I arrived in Italy I got culture shocked, but in a good way.  Studying in Rome would be one of the most life-changing events in my life. 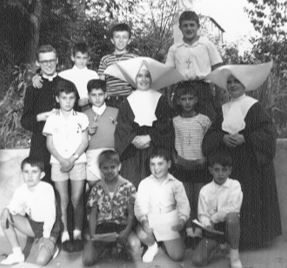 Fr. Allen is at top left in the photo with some of his Roviano friends

I first lived at our community in Roviano about 30 miles east of Rome.  At first it was not a very enjoyable experience.  It was in the mountains and at that time it was cold and damp.  They didn’t have room for me so I actually slept in what was the barber shop.  The “running water” meant that you got water in a basin and ran down the hallway with it.  I was homesick.  I was really eager to get out of there and down to Rome to our scholasticate.

When I got to Rome we had 108 students that first year from 18 countries.  It was crowded, it was noisy and we lived over a very noisy street.  But I enjoyed it very much because being part of an international community was so important to me.  During the summer we would go back to Roviano and it became a little paradise for me.  The people there did so much to shape the person that I am today.

My years in Italy really stretched me a lot.  I got to hear so many different opinions from students from around the world.  The time at the international scholasticate pulled me out of myself and gave me a worldview.  It truly had a profound impact on shaping me not only as a Missionary Oblate but also as a citizen of the world.  I feel that I am the Oblate, priest and man I am today because of my Rome experiences.