Martha is a 42-year-old mother who has battled cancer for 8 years. It has metastasized and is now in her brain and is irreversible. While  She is very sad at the prospect of leaving her children, she

is thankful that God gives her the  opportunity to say goodbye and to prepare her family. Martha’s sister mentioned to us that Martha has begun to forget things and to  become angry over small things that never used to bother her. The doctors said this is to be expected.

Martha’s husband left the family a year ago after tiring of the fighting. Martha was angry he could not have waited for her to die. He does still help with some family expenses, but
it is not enough. About three years ago Martha reached out to the Church asking for last rites, thinking she was dying then. When Fr. Jesse OMI met her, he arranged that our social outreach program would begin helping the family.  We have helped with food baskets and transportation to medical appointments. A couple months ago, she contacted us, but this time on behalf of her mother. The mother has a deteriorating eye condition caused by glaucoma that has rendered one eye to only 5% vision and the other to 20%. The cost of the surgery is $1300 per eye but could improve the better eye to 40% vision. We learned that Martha’s father had died a year ago from stomach cancer, putting a financial burden on the family. The sister used to work in the US, but COVID has not allowed her to do so, worsening the financial burden. The family is busy selling chocolates on the streets and at the church to try to raise money. Fortunately, we have a US donor organization, Maximum Impact, that offered to help. We have the appointment scheduled, and she is going through the additional pre-op testing required by having a pacemaker.

Martha’s sister explains that her husband left her three years ago and died two years ago. She encourages her children to love their father and not hold the separation against him. When Martha’s husband left her, the sister counseled Martha’s children to respect their father and encourages Martha to forgive. It has been a pleasure to get to know Martha and her sister and to see forgiveness and family-harmony in practice. We pray that the mother’s surgery goes well realizing how important this is for the whole family. 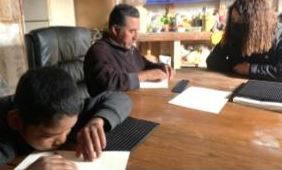 We have a couple in the US who decided to donate a house to a family in Mexico, leaving us to choose which family. Of course, this is a difficult decision, but we chose Javier’s family after some prayer and consideration of how Javier and his wife have been so
selfless. We have written about Javier before because, while being blind, it is he and his wife that have introduced us to two other blind persons, an accident victim, and
a struggling elderly couple.

One often sees Javier on the street with one of his two children selling homemade buñuelos, a Mexican crispy sweet bread. Javier has been a good influence on young David, who became blind in recent years and has been very discouraged. Young David and Javier are shown in the photo to the left receiving braille lessons. Our resident engineer, Luis, has overseen the construction, which is nearing completion. Fr. Jesse OMI orchestrated a painting party made up of many of the youth who are in close association with the parish. In the picture are an engineer, psychologist, schoolteacher, communications major, school administrator, accountant, a pre-novitiate, and some students. Javier and his wife and daughter are to the left in front. 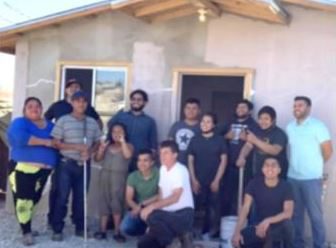 the usual house building groups, with few exceptions, have not been able to come and build the houses as they have done for over 25 years. Yet their legacy inspires others. What a blessing to observe the excitement of Javier’s family as the house nears completion. We have spent hours in their dirt-floor-and-tarps house while braille lessons took place. We can testify to the cold and sometimes damp. Our featured student is Rojas García Deborah Lizbeth. She studies psychopedagogy (study of how to teach and psychology) and is sponsored by Sue Andresian. Lizbeth’s parents divorced and now Lizbeth and her sister must work to help the family’s finances. She has been active in SEARCH for years but has little time now for recreational activities.