By Debbie Musser, Originally Published by the Catholic Spirit

(Editor’s Note: Christ the King Retreat Center has an all-new website, check it out HERE)

“It’s a special place that has a peaceful aura from the moment you first enter — a mental and spiritual oasis,” said Tom Kraus, 52, describing the retreat center, also known as King’s House, which was established in 1952 in Buffalo. 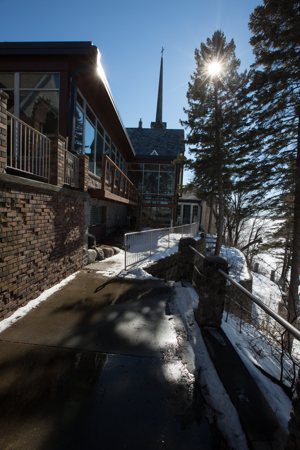 Kraus, a parishioner of St. Peter in Mendota who lives in Mendota Heights with his wife, Paula, and their four children, was invited by a friend to a King’s House men’s retreat in January 2006.

“Paula and I had just had our first child a few months prior, and I was just starting a business, so my initial response was to decline his invitation,” Kraus said.

“But I had attended other retreats by that point in my life and knew how valuable they could be,” he said. “So, with Paula’s support, I decided I would invest in the weekend.”

That retreat became the first of 16 Kraus has attended at King’s House, always in January. “The retreat helps me set my focus for the year and strengthens my relationship with God in preparation for the road ahead,” he said. “The silence at King’s House is particularly precious because our lives are so filled with noise, both literal and figurative.”

King’s House — a chapel, two conference rooms, two dining rooms and 70 double occupancy rooms with private bathrooms — sits on 5 acres. It was a private home purchased for retreats by the Missionary Oblates of Mary Immaculate in 1951; the Oblates further developed the house in several phases. Legend has it the area was occupied by Native Americans who called it “Dabinawa,” meaning a sheltered, quiet place.

A ministry of the religious order, King’s House offers 30 three-day silent retreats each year with a common theme. “This year’s theme is ‘A Listening Heart,’” said Father Richard Sudlik, 75, director of King’s House who leads the preaching team of two Oblate priests, one Oblate brother and a Franciscan sister.