By Fr. Harry Winter, OMI, with thanks to Fr. John Hanley, OMI and Jennifer Fournier

(Editor’s Note: If you missed last week’s story on the celebration at the Soldier’s Home in Chelsea, MA, CLICK HERE)

Over 50 Oblates and staff from the Tewksbury-Lowell, MA area filled the Function Room on June 3 at the Immaculate Heart of Mary Residence, Tewksbury, to celebrate Fr. Pat Healy’s 100th Birthday and 74th Anniversary of Ordination.  (The actual date was June 1).  We began at 11:30 AM with drinks and hors d’oeuvres, followed by a dinner of Tenderloin Steak and Haddock Newburgh and luscious desserts. 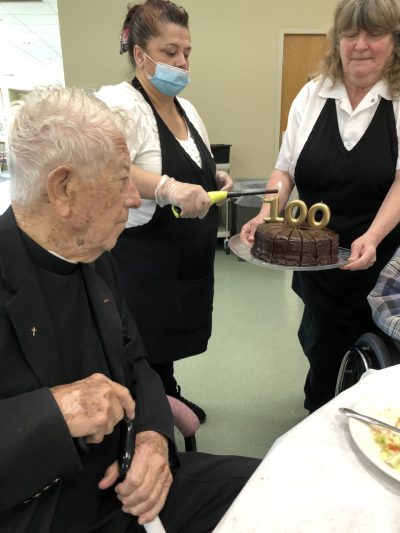 The staff at IHM serves up a home made birthday cake!

Fr. John Hanley, OMI, local superior, began the program, reading a letter of congratulations from our Superior General Louis Lougen, OMI.  Father Lougen mentioned his conversation with Father Healy during Lougen’s six month stay at the residence, concerning the red cushions in the chapel obtained by Healy when the latter was superior of the community.  Father Lougen finished his remarks by telling Father Pat he offered Mass for him and his family in the chapel of the General House where a portion of our Founder’s heart is preserved.

Fr. Jim Brobst, OMI, Provincial Vicar, then brought provincial Louis Studer’s best regards.  Father Pat responded to all by telling the complete story of the red cushions in the chapel, and urging us to visit the Oblate cemetery on the residence grounds.  He related how Bishop Turquetil, OMI, buried in the center of the cemetery, had ordained him to the priesthood.  He told us about Frs. Bill FitzGerald, Dan Kennedy, Al Ponsiglione and Tom Craven, four Oblate military chaplains buried there. He explained how Fr. Bill McSweeney and he were going to preach at each other’s funerals and what happened to the text of Fr. McSweeney’s eulogy (he died here at age 98 on Nov. 30).

He finished by citing how much the Finger of God is in his life (the title of his first book is The Finger of God).  Craig Francis, assistant director of buildings and grounds and a veteran himself, then explained the various ribbons and medals which Healy had earned during his many years of service as a chaplain (using their pictures on p. 36  of Healy’s second  book, Vietnam Vignettes).

Two veterans who assist Healy at St. Michael’s Chapel, Chelsea, MA joined us:  John Dodd and Jimmy Williams.  A fine time was had by all!