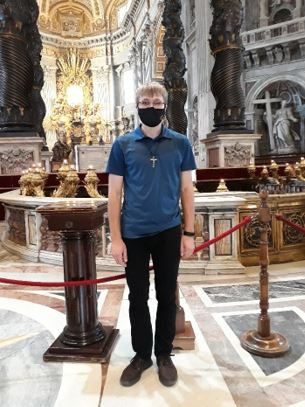 For 140 years, young men from around the world have been invited to travel to Rome, Italy to study for the priesthood as Missionary Oblates.  In May, Bro. Mateusz Garstecki, OMI. followed in their footsteps as he left his hometown of San Antonio, Texas to become a student at the Oblates’ International Roman Scholasticate.

Being selected to study in Rome is an opportunity given to only a handful of Oblate seminarians.  The scholasticate is usually home to about 30 students representing roughly 15 countries from around the world.

Brother Mateusz’s journey to Rome began as a child growing up outside of Chicago in a family very proud of their Polish culture.  The Garstecki’s traveled to Poland every couple of years and Bro. Mateusz connected strongly with his Polish and Catholic heritage.  The family moved to San Antonio, Texas around the time when Bro. Mateusz finished the fifth grade.

Brother Mateusz started thinking about becoming a priest in his junior year of high school.  There were a few events that led him to enter formation with the Oblates.

In my own prayer I was asking God to help me know what path to take in my life after completing high school, although religious life or priesthood were not originally part of what I imagined,” said Bro. Mateusz.  “Around that time, I also met Sr. Yolanda Flores, S.S.C.J. at our parish and she asked my brothers and I if any one of us might consider a vocation to be a priest. She helped me to get in contact with Fr. Charlie Banks, OMI. who was the Vocation Director at the time.”

“The first time I met with Fr. Charlie he mentioned the Oblates were missionaries.  I felt that God was speaking to me through this because I have an aunt who is a sister in the Society of Divine Word and works with the poor in Paraguay,” said Bro. Mateusz.  “When my siblings and I were growing u, our mother would sometimes tell us about that aunt and her experiences and the challenges of serving in Paraguay.  So, when Fr. Charlie mentioned to me that the Oblates were missionaries, it really struck a chord deep inside of me that God might be calling me to dedicate my life in service to the poor as a religious and priest.  Later on, I attended an Oblate Come and See program.  I was happy to follow this path I believed God was setting me on, and I applied to enter formation.”

After high school Bro. Mateusz joined the Oblate Pre-Novitiate program in Buffalo, New York.  At the age of 18 he was the youngest member of the Oblate community.

As a pre-novice Bro. Mateusz had an opportunity to help for a month with some of the ministries of the Oblates in Tijuana, B.C. Mexico.  The experience further opened Bro. Mateusz’s eyes to the various needs of the poor and the big impact Oblates can have through their ministry in those desperate circumstances.

“My time in Tijuana was very blessed, as I met many loving, faithful people in the parish and youth group and I was blessed to witness the work of the Oblates in that part of the world,” said Bro. Mateusz.  “Many of the youth there wore shirts that said, “Tranformados por Cristo” which means “Transformed by Christ” and I think those words truly capture how God is touching the lives of the poor through the ministries of the Oblates.” 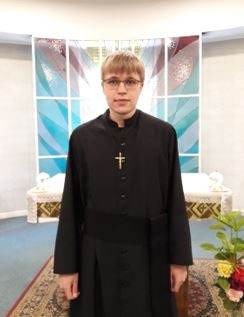 In 2019-2020 Bro. Mateusz spent a year at the Oblate Novitiate in Godfrey, Illinois a time away from family and friends to examine more deeply if he was being called to religious life and specifically as a Missionary Oblate. The year gave him many opportunities to grow on a human and spiritual level in the context of the community.  In August 2020, Bro. Mateusz professed his first vows as an Oblate and enrolled at Oblate School of Theology (OST) in San Antonio, half an hour away from his family home.

As a student at OST, Bro. Mateusz was part of the Blessed Mario Borzaga Formation Community, a group of Oblate seminarians from around the world who are studying at the school.  His community included Oblates from not only the United States but also Zambia, Lesotho, Botswana, Nigeria, India, Bangladesh, Kenya and Mexico.  Also, two of the Brothers from the U.S. Province are originally from Burma and Haiti.

Brother Mateusz’s year as part of the international community in San Antonio has prepared him well for his studies in Rome.  His Oblate journey has already taken him around the world and every step of the way he becomes even more convinced that he must continue to learn how to be a vessel of the Good News.  He continues to seek to grow in relationship with God as he encounters many new people and experiences.  He prays that all these experiences will help prepare him to minister well as an Oblate among the people of God.