The Missionary Oblates’ St. Joseph’s Church in Hnivan, Ukraine has been recognized as a missionary sanctuary.  The designation is the first of its kind in the country. 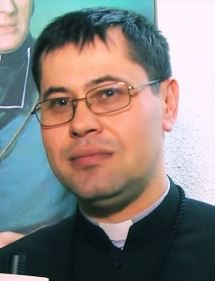 “We hope the sanctuary in Hnivan becomes a special place of prayer and help for families, as well as a place for building and strengthening their Christian identity,” said Fr. Pawel Wyskowski, OMI Delegation Superior for the Oblates in Ukraine.  “A special task of the Oblates will be to play a positive role in the pursuit of Christian unity through prayer, and for this intention to spread the devotion of St. Joseph, who is venerated by both Catholics and the Orthodox.”

St. Joseph’s Church was the Oblates’ first permanent outpost in Ukraine in 1991.  After considerable difficulties, the building was returned to the Catholic Church, rebuilt and solemnly reconsecrated in September 1997.

St. Joseph’s Church was built in 1906, but it was turned into a sugar factory when the Communists came to power.  The steeple was used as a water tower and the sacristy became a bathroom.  When the Oblates took over ownership of the building one of the first things they did was install a giant cross on the gate to hide two red Communist stars. 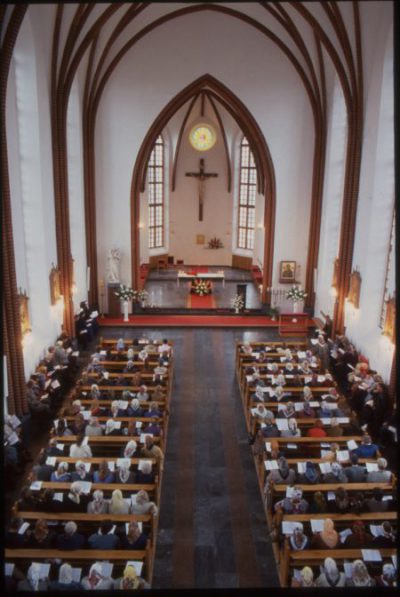 “For 75 years the few Catholics in Hnivan gathered and prayed in secret,” said Fr. Pawel Tomys, OMI  “That made them enemies of the government but they never gave up their faith.”

The Oblates spent several years raising money and restoring the building into a house of worship.  Often the restoration work was performed with limited lighting because of a lack of electricity, especially during soccer matches when electric usage surged.

More than 1,500 people attended the first Mass after the church was reconsecrated.  Many of the people filling the pews that day had never been to a Catholic Mass before.

Last year the local bishop approached the Oblates and parishioners about designating the church as a missionary sanctuary in order to increase the number of people attending Mass and to make the church a future site of pilgrimages.  The idea was met with overwhelming enthusiasm.

“We are fully aware that we are at the beginning of a spiritual path of deeper involvement in the spirituality of our Patron Saint,” said Fr. Wyszkowski.  “We invite everyone to join in our celebration and we especially ask for your prayers for our newly-emerging sanctuary.”