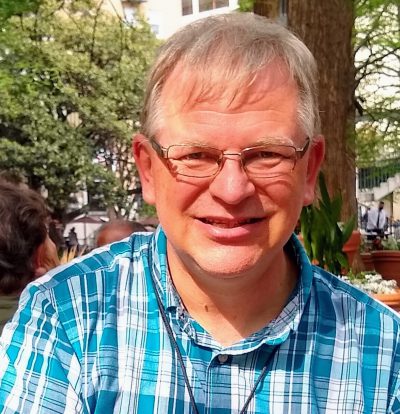 As Hurricane Ida roared through Louisiana last weekend, Oblates, like so many around the country worried and wondered about their brothers living in the path of the storm. The Missionary Oblates have men and ministries in New Orleans who were much on the minds of their fellow Oblates. Fathers Tony Rigoli, Dwight Hoeberechts, and Donald McMahon all live and work at the St. Jude Shrine / Our Lady of Guadalupe Parish which is located just a block off the French Quarter. Not far away, Fr. Emmanuel Mulenga is the pastor of the historic, St. Augustine Parish. Fortunately, email and social media brought good news even as the storm raged.

Vicar-provincial for Personnel, Fr. Art Flores, OMI, sent this email out Sunday evening: “Sixteen years ago, on this day, New Orleans sustained a direct hit from Hurricane Katrina.  This evening, Hurricane Ida came close to doing the same thing, battering the Louisiana coast with sustained winds of 130 mph.  I received word from Dwight Hoeberechts that our men are, thus far, safe.  New Orleans has no power at the moment, as the storm continues to go through.  Let’s keep our brothers in prayer, along with the people of New Orleans and Louisiana.”

Another Oblate, Fr. Andy Sensenig, also managed to get in touch with Fr. Hoeberechts: “I talked to my ordination classmate, Fr. Dwight Hoeberechts OMI late last night. He said that the New Orleans hospital where he was ministering during Hurricane Ida, did not lose power despite the fact that the rest of New Orleans did. Fr. Dwight mentioned that he was busy with anointing folks and praying with them. Nevertheless, he was very grateful for all your prayers and humbly asked that we continue to pray for those impacted by Ida and the brave first responders. So let’s just do that today and pray as much as we are able. So with much gratitude, see you in prayer!” 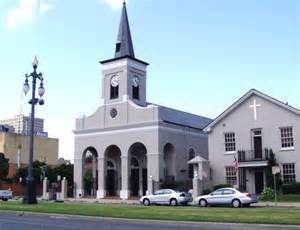 Reached by phone on Monday, August 30, Fr. Hoeberechts gave an update on the Oblates: “Knowing the storm was coming, we all made plans for the weekend, Fr. Mulenga went to Birmingham to visit friends and wait out the storm. Fr. Don McMahon went to visit family in San Antonio. Fr. Rigoli had intended to leave, but finally decided to ride out the storm at the Shrine/Parish. (Click here to read about Fr. Rigoli’s experience during Hurricane Ida in a story that appeared in The Buffalo News) After Mass on Saturday, we closed up the Parish and I went to the Tulane Medical Center where I volunteer as one of their chaplains. During the storm, the ambulances and first responders don’t go out, there’s nothing they can do during the storm, so I mostly talked and prayed with staff members.  The hospital wouldn’t start to get busy until after the storm had passed. Being on generators, the hospital always had power even though there is no electricity in the entire city of New Orleans.” 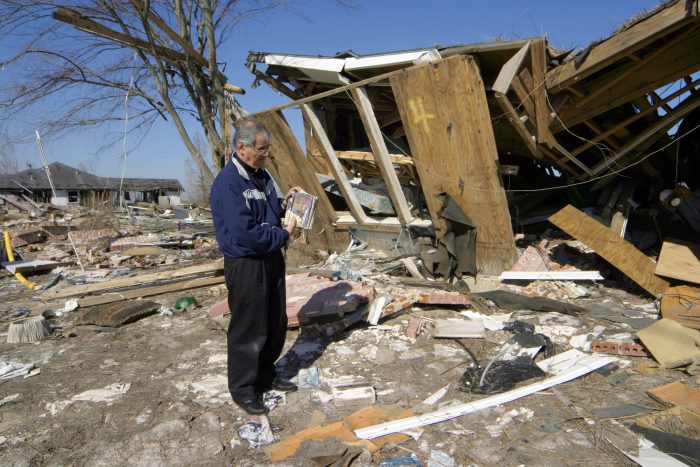 Fr. Rigoli surveying a damaged home after Katrina in 2005

Fr. Hoeberechts said he would probably remain at the medical center until at least Wednesday, filling in for others who will be hard-pressed to make it to the hospital in the storm’s aftermath.  Fathers Mulenga and McMahon will return to pick up the pieces at their respective ministries (though we’ve had no reports of extensive damage at either of them). They’ll re-join Fr. Rigoli who is an old hand at cleaning up after hurricanes, he was there in 2005 when Katrina came through, an even greater disaster for the City of New Orleans.

So, as the long process of recovery begins, the Oblates and those to whom they minister in New Orleans continue to ask for your prayers.

UPDATE September 1: A phone conversation with Fr. Tony Rigoli brought news that he and Fr. Dwight Hoeberechts drove to Houston, TX on August 31st to stay at an Oblate parish to wait for the return of electricity in New Orleans. “I had a funeral and a wedding this weekend, everything is cancelled, nobody has power and no one can travel into the city for an event like that,” said Fr. Rigoli. When asked how it was to ride out the storm alone at the rectory he said, ‘I was most afraid when they said there could be tornados, I went into a room with no windows in case that happened, but it didn’t, thank God.”

Fr. Rigoli said that he did not see a lot physical damage in New Orleans, as was the case after Katrina, the lack of power is the big problem. “I feel so bad for the people, the heat makes life very difficult. Without electricity, gas or water, there is literally nothing we can do for the time being. But as soon as the electricity is back, we’ll be back.” 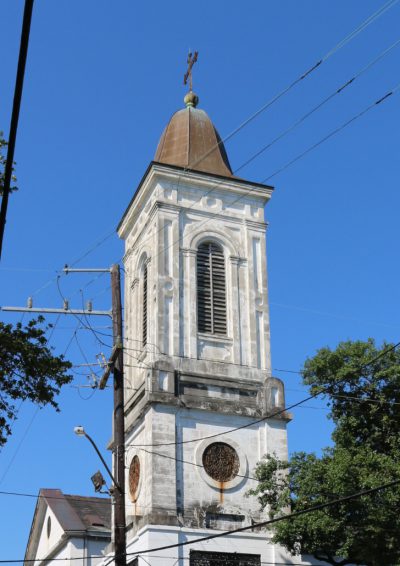 UPDATE September 1:  The cross atop the historic St. Augustine Church was damaged by high winds during Hurricane Ida. Oblate Father Emmanuel Mulenga is pastor of this iconic African-American Parish. Read all about the damage and see photos in this copyrighted story published by the New Orleans Advocate. (Thanks to Fathers Louis Studer, OMI and Séamus Finn, OMI for making us aware of this breaking story)

Cross atop the steeple of St. Augustine’s is seen un-damaged in the 2018 photo on left