(Editor’s Note: For the past year, the Oblate’s historic Immaculate Heart of Mary Novitiate outside Godfrey, IL has been undergoing major renovations. The novitiate is nearly finished and the novices, along with their formators, some volunteers and Oblate employees began moving furniture into the building last week. The group made a video of their day and you may view it by….) 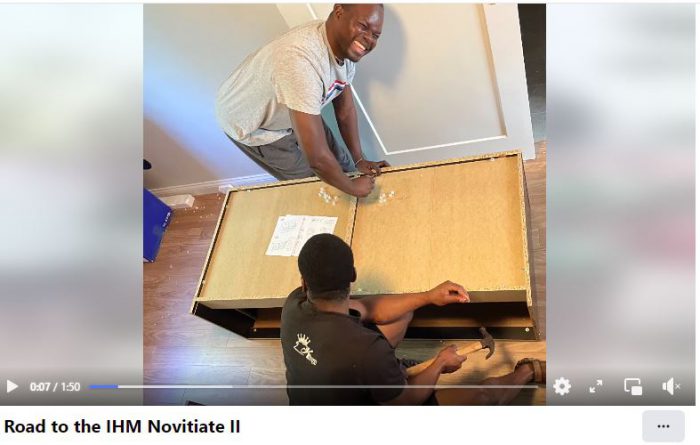 Short Bios of the New Novices 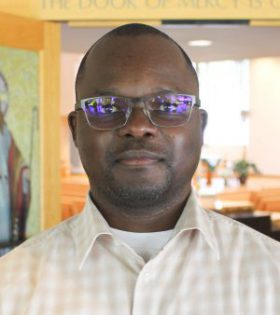 Etienne Kabemba, 46 was born in the Democratic Republic of the Congo. It was in his homeland that Etienne first met the Oblates. He spent some time in Oblate formation there before discerning out and moving to Montreal, Canada where he worked for 20 years as a nurse in hospitals. He remained in contact with the Oblates in the Congo and in 2018 he decided again to pursue an Oblate Vocation. He comes to the U.S. after attending Pre-novitiate in Canada.

Etienne says that caring for people is part of his personality and that the Oblate charism of reaching out to the “most abandoned” appeals to that part of himself. He looks forward to missionary life and feels ready to go wherever he is needed.

As the senior member of the novice class, Etienne is there for the younger men who are dealing with the culture shock of coming to the midwestern U.S. from countries in Africa. He also says he is learning from them as well, and he hopes this will be a year of learning from each other. 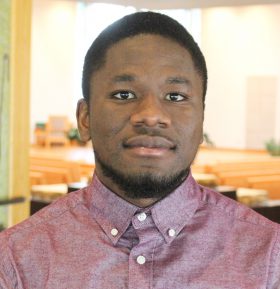 Sipho Mukobola, 21, comes from Northern Zambia where he was the eldest child with one brother and two sisters. After his parents separated,  he lived primarily with his mother. During high school Sipho felt the call to the service of God, but felt torn between his interest in a religious vocation and a sense of responsibility to pursue a career that would help support his mother and siblings. In prayer he asked the Blessed Mother to intercede with a sign. He asked that she help him achieve the top score of 6 points as he approached high school graduation. Anything less and he would pursue a professional career. When the time came and scores were posted, Sipho had indeed achieved the 6 points he sought. After discussing it with his own mother, she gave him her approval and Sipho entered the Oblate pre-novitiate in Zambia.

Having been in the U.S. for just about a month, Sipho is still getting accustomed to the U.S. food and the Midwest humidity. Though heat is nothing new to this Zambian, humidity is, and he is still getting used to it. He likes the food, though he finds our custom of taking the heaviest meal in the evening, as opposed to mid-day as it is in Zambia, challenging. He’s looking forward to the upcoming move to the renovated Novitiate in a few weeks. 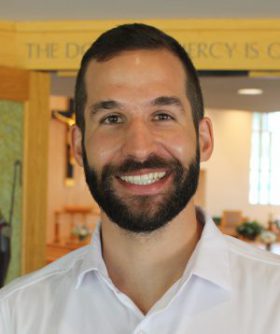 Pablo Henning, 29, was born in Venezuala but moved to Houston, TX. as a child. Pablo says he, “grew up in cyber-space and in the world of computer gaming.” Graphic design became one of his many interests along with Art History and Bio-engineering. In addition to working in not-for-profit areas, he has studied art in Paris, and lived overseas in Denmark, and Brazil where he explored ways to meet the medical needs of people living far from medical facilities.

He said he never thought about a religious vocation until he was recovering from a major hip surgery in 2017.  It happened to be in January while recovering that he often attended Mass and heard several readings about the Disciples, that he first thought he was being called.  He spoke with an Oblate, Fr. Ray Cook, OMI, Director of Campus Ministry and Chaplain for St. Mary’s where Pablo’s family were members. He eventually entered the Oblate Pre-novitiate.

As he begins his year in the novitiate he says, “It keeps getting better and better.” Pablo hopes to be able to use his considerable skills in computer technology, design, and art along with the more traditional pastoral skills in his future life as an Oblate. 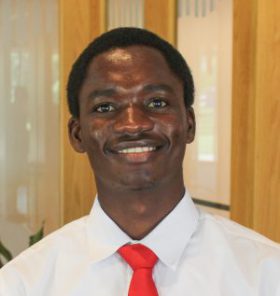 Royd Miyomba, 25, Comes to us from the Luapula Province in Northern Zambia. He was the 3rd of four boys in his family but sadly he is the only survivor as the others have died. His parents divorced while he was a boy and he was primarily raised by his father and grandmother.

After high school Royd traveled to the Western province of Zambia where there are many Oblate ministries. He met Bishop Evans Chinyemba, OMI, Bishop of the Diocese of Mongu. While staying in the west, he listened to Radio Liseli, a station owned and operated by the Oblates. Royd credits the station with introducing him to the Oblates through its programming. His discernment moved him to apply to the pre-novitiate and he was accepted.

Having been in the U.S. for just a month as he begins his year as a Novice, Royd is enjoying his stay as he acclimates himself to a vastly different society and system. He looks forward to continuing his studies and hopes to someday be a missionary in foreign lands. 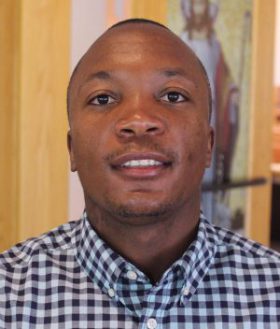 Chileshe Mulenga, 24, is from Mazabuka, Zambia. He grew up second-oldest of seven children. He has two sisters and four brothers, two of which are twins. His parents owned a restaurant. As a youngster, Chileshe enjoyed being an altar server and told his mother he wanted to be a priest. Later on he focused on being a medical doctor. That desire stayed with him until the 11th grade when he spoke with a friend who had attended an Oblate “Come and See” session for young men interested in a missionary vocation. Eventually, Chileshe attended a “Come and See” session himself, and decided he wanted to be a missionary.

Having attended pre-novitiate in Zambia, Chileshe arrived in the U.S. for his Novitiate year about a month ago. In that time he’s already determined that he likes Mexican food!