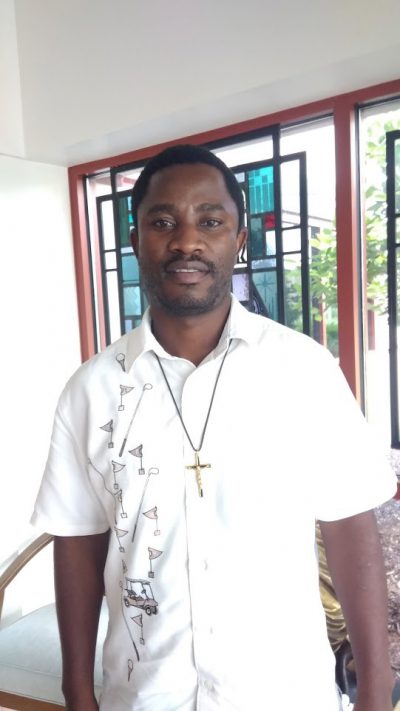 In 1983 the Missionary Oblates in Texas accepted the challenge of starting a new ministry in the African nation of Zambia.  Four Oblate Texans were assigned to the mission.  And each one of those pioneer Oblates would have a significant impact on the life of a young man who would carry on their missionary spirit.

“The Oblates have been part of my life from the very beginning,” said Bro. George Litiya, OMI who was born in 1983.  “I was baptized by Bro. John Kaplinger, O.M.I. who was one of those first Oblates to come to Zambia from Texas.”

Today Bro. George is part of the formation staff at the Oblate Novitiate in Godfrey, Illinois.  He is grateful to the trailblazing Oblates of Zambia who were part of his Oblate journey, a voyage that truly started from the cradle.

Brother George grew up in the Oblates’ Sancta Maria Parish in Lukulu in the Western Province of Zambia.  The parish was one of the first missions established by the Oblates in Zambia and is still a vital part of their ministry today.

Brother George became an altar server at Sancta Maria while in grade school.  He was confirmed by Bp. Paul Duffy, OMI., who was a founding member of the Oblate delegation to Zambia.

In high school Bro. George became active in youth ministries coordinated by the Oblates.  He began thinking about the possibility of religious life after getting to know the Oblate scholastic brothers who came to the area to take part in parish and youth ministries.

When Bro. George decided to formally pursue the possibility of becoming a Catholic missionary, he had to decide which community to join.  A trade center he attended after high school to study auto mechanics was run by the Christian Brothers so that was one possibility.  But he also felt a strong connection to the Oblates who he had known all his life. 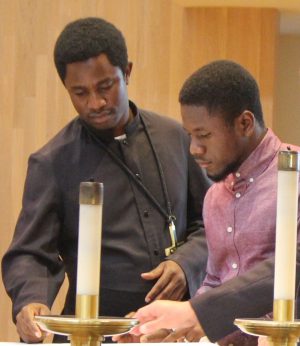 At the recent welcome for new novices in Belleville, Bro George (L) watches as Sipho Mukobola signs his commitment paper

“One day after Mass Fr. Ron Carignan, OMI asked me about my future,” said Bro. George.  “The next day I met with Fr. Ron, who was the Delegation Superior at the time, and he shared with me more about the Oblates.  Father Ron tied it all together for me and that convinced me to join the Oblates.”

After two years at the Oblate pre-novitiate program in Zambia, Bro. George spent his novitiate year in Namibia.  His Novice Master there was Fr. Pat Gizen, OMI who was also one of the four founding members of the Oblates’ Zambia mission.

Brother George then attended the Oblate seminary in South Africa.  During his pastoral internship he ministered at the Oblates’ Radio Liseli in the Diocese of Mongu in Zambia.  Brother George helped to broadcast a variety of religious programs that could be heard throughout the western portion of the country.  This ministry is especially important to people living in isolated rural villages where access to the Word of God is almost non-existent.

Brother George took final vows in 2013.  His first assignment was as part of the pastoral team at St. Michael Parish in Kalabo.  The parish has numerous mission centers connected to it out in remote villages.  Brother George would spend weeks at a time visiting these villages to bring them the Word of God.

In 2015 Bro. George’s knowledge about mechanics came in good use when he was assigned to help operate a garage run by the Oblates in Lusaka.  The garage fixes vehicles for the Oblates and other religious congregation.  With many roads in Zambia nearly impassable, having a garage with good mechanics is vital for the Oblates to reach out to the most isolated. 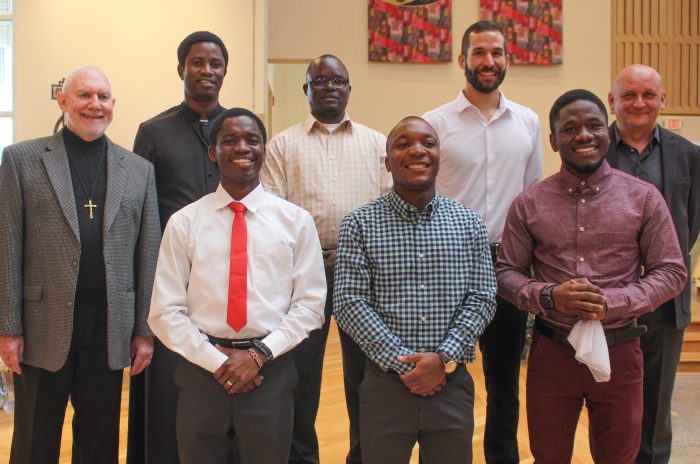 In 2019 Bro. George returned to South Africa for advanced studies.  He then got the shock of his life when he received an obedience halfway around the world, as a member of the formation team at the Oblate Novitiate in Godfrey, Illinois.  The novitiate is for the United States Province but welcomes novices from around the world, particularly Zambia.  Currently there are three Zambian Oblates there.

As part of the novitiate team Bro. George teaches a class in the charism of St. Eugene De Mazenod, founder of the Missionary Oblates.  Saint Eugene once instructed his follows – “Let us bow down, listen respectfully, admire in silence.  Let us swear to be faithful and to become worthy of this great vocation.”

As a child Bro. George admired the Oblates in silence.  As a seminarian he listened to them respectfully.  And today he bows down in obedience to their missionary work that is transforming the lives of the poor and needy around the world.  He has sworn to be faithful, and is indeed worthy of this great vocation.