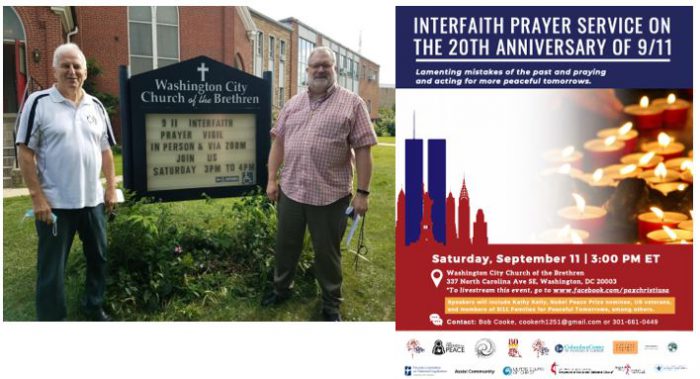 USP JPIC participated in the PAX Christi co-sponsored interfaith prayer service at the Church of the Brethren in Washington, DC on September 11th. Frs. Jim Brobst, OMI & Séamus Finn, OMI represented the JPIC office, which has been a member of Pax Christi USA for many years.

Many of you were in New York City on 9/11; in the months and years that followed, some of you traveled to Afghanistan, Iraq, and Guantanamo.

In the days immediately following 9/11, my family and our three-year-old daughter took the train to New York City. We spent the entire day accompanying family members of the victims in Washington Square and Union Square. Everywhere you could see little altars, with vigil lights, flowers, pictures of loved ones, and messages scribbled on poster board: “Have you seen my father? My brother? My daughter?” They were on the 71st floor, the 32nd floor, and wearing this or that…

As people of many faiths, and people of good will and compassionate hearts, we share a common hope for Peace, Salaam, Shalom. May we do everything in our power to protect human life, welcome refugees, challenge militarism across the globe, and recommit ourselves to nonviolence, knowing that violence and war are always a defeat for humanity.

In the days immediately following 9/11, Rep. Barbara Lee cast the only vote in Congress against going to war in Afghanistan. Pivotal to her decision was attending a memorial service where a clergy member said: “As we act, let us not become the evil that we deplore.”

Photos from the service are located at this Flicker Site: CLICK HERE 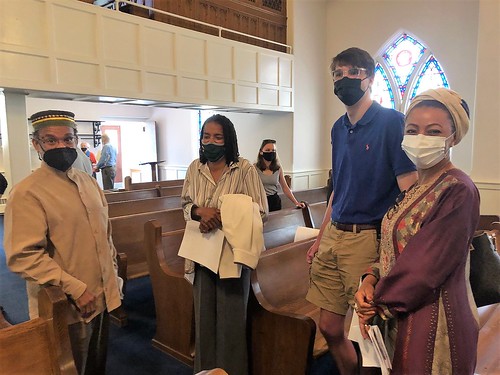